A modern tale of Queens' King of Crap and his port-a-potty empire. 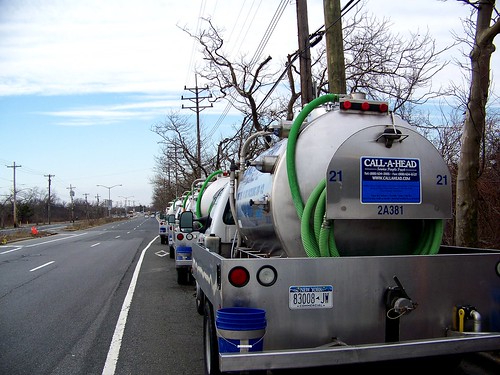 Charles W. Howard is the porta-potty king of New York City. The seat of his vast empire is Broad Channel, Queens; from this windswept rock in Jamaica Bay, you can see the lights of Manhattan twinkling across the water. Early every morning, while the city sleeps, dozens of trucks — tagged with WE’RE #1 AT PICKING UP #2 decals — snake through the five boroughs to clean his 18,000 toilets. The company boasts more than $35 million in annual revenue, thanks in part to “salesgirls” who head out each day in the company’s signature Volkswagen Beetles to poach contracts from competitors who are too shy to sell with sex. Charlie himself arrives at work only around midday in a black Cadillac Escalade. Young female dispatchers and clerks cry “Charlie! Charlie!” while men in orange slickers hose down toilets in the yard.

On a recent Thursday, the gleaming Escalade stops at a pizzeria, and Charlie, 53, steps out, a bit heavy and wearing a rumpled purple dress shirt. He’s brought along Kimberly, the star of his company’s YouTube channel. She’s beautiful, blonde, and his wife. Charlie favors superlatives, like another Queens businessman, and speaks with the accent you’d expect from a man so old-school New York there’s a neighborhood named after his family. And now, not far from Howard Beach, he explains why he’s the greatest toilet man in America. “I had different theories about business,” he says, “and they all turned out to be correct.”

Nationally, portable toilets are a $2 billion business. Construction rentals are three-quarters of New York’s market, and as America’s real-estate sector has rebounded over the past half-decade, the industry has exploded. Developers pay $100 a month for a pump truck to visit once a week and hoover up blue-tinged waste. Profits are made by building dense routes: lots of toilets at a stop and lots of job sites close together. Events are a growing corner of the business. Go to Smorgasburg and count the toilets: Daily rentals run about $225 each. Use a luxury restroom trailer with flushing toilets at an upstate wedding? It cost the bride’s parents a few thousand bucks just for the night.

But now, Charlie might fall off his throne. More than 1,300 former pump-truck drivers, the men who literally haul his shit, are part of a class-action lawsuit that could put him out of business. The rest of the big five covet his empire.

“They would love for us to get destroyed,” Charlie says, though it’s quite a vague “they.” Spend enough time in his world and you wonder if he’s perhaps the most hated man in the city. Kimberly Howard nods. “Business,” she says, “is war.”

Yecch! She's wearing a revealing dress while showing off toilets?

Man, would I love to steal one of those trucks and spray some politicians!

Oh look a candy dish - just what I want in a public bathroom! is there any truth to the whispers that he’s been dumping shit into Jamaica Bay for decades?

Thanks to her, I now keep a bowl of Andes on top of my commode

George stop with the sexist misogynist comments, kay? We know you want her.

Leave our boy alone. He works for a living unlike you cranky commies. Get a job you bums. I hear they're hiring at Call A Head.

In earlier youtube ads the Mrs. wears a modest dress. She must have had a boob job and wants to show them off. Sex sells.

"I hear they're hiring at Call A Head"

They are always hiring, but I think you need particular attributes to qualify.

This article pisses me off.