Coastal erosion at Rockaway Beach has got menacingly worse

It’s not summer just yet, but one Queens community is fed up that nobody seems to be stepping-up to help in the year-round fight to save its beaches.

Residents say it’s been one broken promise after another to alleviate erosion on Rockaway Beach.
The Rodkin family were out for a winter walk along the concrete near the sand Friday afternoon. They’d have rather been strolling on the beach, but it’s been closed for months.

“Break’s my heart,” Alice Rodkin said. “My mom brought us here as kids. We can’t even enjoy our own beach.”

People who live nearby say the sand should be much higher than where it is, but rapid erosion means you’ll need to jump more than four feet to get from the boardwalk to the beach.

Last spring, Cori said the erosion was “by far the worst” it had been. Fast forward to 2019, and the dunes are nearly half the size they were last April. He’s been fighting for the city and federal government to install barriers like jetties and rock groins to help protect the beaches as they’ve long promised they would.

The federal agency says it’s working to make sure the area gets the most “effectively designed plan to reduce flood risk and combat erosion.” The city says its understanding is that should start late 2019.

This is a lot worse than what I saw last October in that same area.

If only the city would heed it's own warnings from their lame art installation. 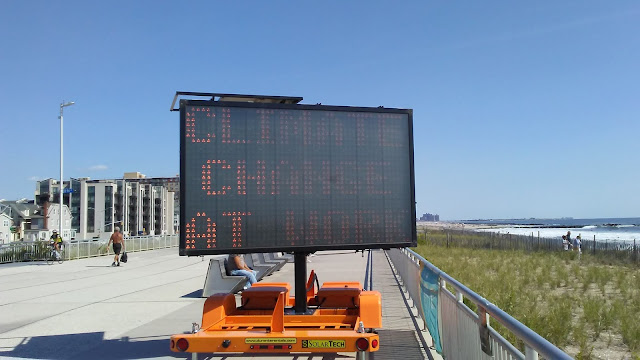 Here's a video of the ocean hitting the boardwalk entrance that reporter impressively jumped from.

Quick! Kill all the cows!!

How is it that Fire Island is able to get the Government to replenish their beaches year after year and the Rockaways have to wait until there is no beach at all? What's wrong with this picture?

Hello there! This is my first visit to your blog!
We are a collection of volunteers and starting a new initiative in a community in the same niche.
Your blog provided us valuable information to work on.
You have done a extraordinary job!

There is no solution other than costly and continuous pumping of sand back onto the beach. The cost is enormous. No one wants to pay for it.

Remember Hog Island? A storm washed the island off the map away that was off of Rockaway.I think it was in the 1920's and there were hotels and businesses and the railroad went there too.

For that, I am going to add another video.

You know what causes coastal erosion?
Removal of sea reeds by those
who fancy themselves beach owners!

Natural cycles. Why waste money saving people who insist on living on sand? One day it'll be wiped out by a huge tsunami, but it will be too late to evacuate all the people who will have crowded its shrinking shores.

useful information of erosion control and how can we prevent it.
nice and unique article keep sharing this type of informative updates
soil erosion definition