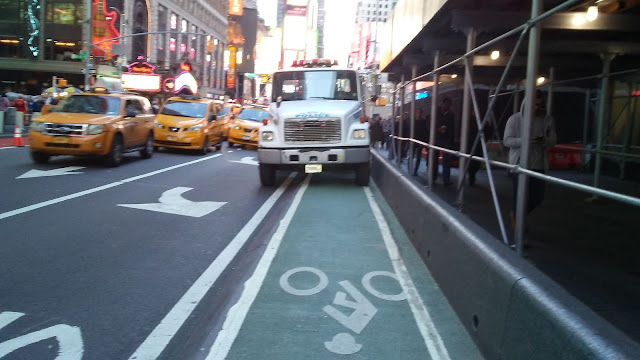 
Mayor Bill de Blasio said Friday the city won’t be going after vehicles clogging bike lanes because it doesn’t have adequate “resources” for such a crackdown.

“We don’t have the resources to do that right now in the way I think … the bicycle community would like to see, but we do believe that anybody who is parked in the bike lane, of course, is going to be summonsed and there will be consequences,” de Blasio said during his weekly appearance on WNYC radio.

“So these are just different priorities that we need to work with every single day.”

Host Brian Lehrer pointed out that callers to the show regularly question why the city is concerned about clogged bus lanes, but not bike lanes, where “someone can get killed or seriously injured by having to swerve into traffic.”

De Blasio responded that bus lanes are a higher priority because “of the sheer number” who use them, meaning the 2.5 million daily passengers.

His comments came a day after de Blasio announced that seven NYPD tow teams would be dedicated exclusively to clearing bus thoroughfares.

Of course this would not be complete without another incriminating display of his brazen sense of entitlement and defiant hypocrisy, for he's also a recidivist scofflaw concerning this pervasive issue.
Posted by JQ LLC at 9:15 AM

How about a towing crackdown on all the cars with no plates and expired out of state plates all over the place?

Sure, but after a cyclist was killed by a hit and run driver in the bike lane on 8th Ave in Hells Kitchen, they found the resources to crack down on cyclists for such non existent infractions such as riding without a helmet.
https://nyc.streetsblog.org/2019/02/07/after-cyclist-is-killed-on-eighth-avenue-nypd-cracks-down-on-cyclists/

Thank G-d this turd can't run for another term, But watch out that doesn't mean his wife can't. Look at what the Barrons, Charles anbd Inez have done. He's term limited, so he runs for office in Albany and pretty much turns his council seat over to his wife Inez. Nothing illegal there. Could BDB do it with his wife? Is the electorate dumb enough to allow it to happen? Stay tuned. BDB is weighing a run for president.

How about we just get rid of the bike lanes, half a block long bus stops and no parking areas so a privileged few can park

Perhaps the assets could be paid for by registering bicycles as moving vehicles and taxing the rider in much the same way they do for automobiles?

Anonymous!!! That would be racist & biased to POC & illegal aliens- how could you- person of privilege dare suggest that the law be applied equally? Don’t you know that there was slavery in this country? Let’s forget about all those white would be indentured servants who were sold into slavery! They couldn’t read or write & couldn’t sign their names to the identures- when they got off the ships they were sold to pay for their ship tickets & accomodations.

Crack down on double parking!

@Anonymous said...
"Perhaps the assets could be paid for by registering bicycles as moving vehicles and taxing the rider in much the same way they do for automobiles?"

Why not tax my feet? Taxing something will not fix things !

This is surprising. I fully expected the mayor to pull cops off of patrols and responding to crimes in order to give out more bus lane tickets.