Congestion pricing to fund the MTA is a go. 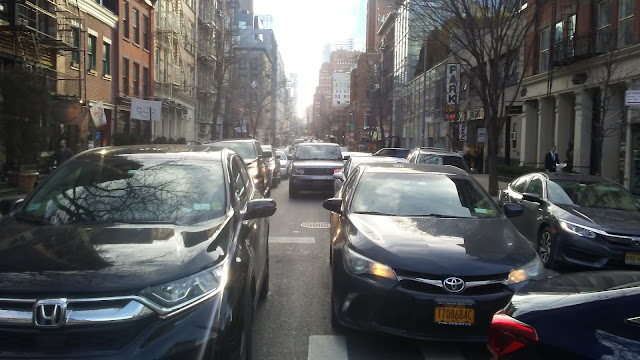 Their proposal, part of a sweeping 10-part overhaul of the Metropolitan Transportation Authority, would install electronic tolling devices on streets south of 61st St. in Manhattan to collect the billions of dollars necessary for enhancing the city subway and bus systems.


Money generated by the new tolls would go into a “lockbox” dedicated to cover the MTA’s capital costs, with the “priority given to the subway system,” the politicians proposed. The plan would also hold the line on fares, with a target of increases of just 2% annually to cover the costs of inflation.


While specifics were somewhat scarce, the governor said he hoped the plan would be in place by the end of 2020. An estimated 731,000 cars travel daily into the designated Central Business District, and could pay upward of $10 per day to bring their vehicles into the toll zone based on previously suggested plans.


Cuomo and de Blasio were initially at odds over the proposal, with the mayor touting a millionaire’s tax on the state’s richest earners rather than the congestion pricing already used in cities like London and Singapore. But the pair worked through their differences to find common ground on the southern part of Manhattan island.

“This is a different plan,” said Cuomo during a radio appearance on WNYC. “I think the mayor had a number of issues that he felt strongly about. This plan addresses them … This is a proposal the mayor and I agree on. I am sure there will be a lot of debate.”


Four previously suggested congestion pricing plans suggested a variety of fees, with a cost of $11.52 a day proposed for cars in two of them. The cost for a truck was set at $25.34 a day under one of the proposals.


Even Manhattan residents would likely get hit with the fee if they crossed 61st St. either leaving or entering the designated district.

This is an austerity measure on car owners to fund the MTA by two jerks who daily commute by motorcade and on many occasions by Mario's son, by helicopter.

The photo above is at Soho on West Broadway of traffic heading for the Holland tunnel. That's supposed to be a two way street.

When the public starts complaining, Cuomo & Diblassio will once again change their minds on the issue.

So what happens as few people drive into Manhattan? The revenue stream shrinks and the subways stay the same. BTW, this will not yield any benefits for another 10 or 20 years.

Oh my goodness! Be prepared for a mass exodus from New York City. Now is the time for all good businessmen to find a place to have their merchandise delivered outside the City and encourage all their customers to use the Internet to order what their heart's desire. How much more assault on our wallets can they allay? Well, they say the taxes will be put in a lockbox for the MTA. Yeah right. These tolls will find their way into funds for our newly created Sanctuary City and the subways will remain as they have been for many, many years. Now it becomes clear why Cuomo has signed in the new gun confiscation law. No dissent allowed.

This congestion pricing idea is disgraceful. There should be more than enough money in the state and city coffers to improve the subway system. Why should people have to be taxed to drive into the city? This will only discourage people from exercising their freedom to travel into the city and enjoy the cultural, economic, and entertainment amenities that are there for all to enjoy. This tax on driving into the city is unprecedented in our history, and wrong-headed. We are getting killed with all kinds of taxes and fees that we never had to pay years ago. The tolls are ridiculously high. The public transportation fares are unreasonably high. We have to pay for water, when we never had to in the past. These additional financial burdens on people are killing their ability to better themselves and advance in society. All Cuomo and DeBlasio are doing is infringing on our freedoms by imposing unnecessary taxes and fees to support more government spending on government freebies to guarantee votes from people who have no initiative, but sit back and wait for handouts to reward them for their non-productivity. Cuomo and DeBlasio are terrible. They are ruining the city for their own ambitions. People want out. The Public Advocate office under DeBlasio was useless. It is so obvious that Cuomo and DeBlasio are pandering to a certain element of the population to ensure votes for them in their pipe dreams for higher office. In doing so, they are destroying our once fair city. Anyone who votes for them, and their ilk, should have his or her head examined.

Motorists entering Manhattan are already paying extra taxes to support the MTA via phone tax, gas tax, vehicle registration surcharges, tolls, and parking. I don't even own a car and I think this is unfair. Why should motorists alone bear the cost of the subway system? How about spreading the pain? Charge a $0.50 surcharge on every stock and bond transaction conducted on Wall Street and put every cent into mass transit. Fifty cents on hundred or thousand dollar transactions would hardly be felt, but with the volume traded every day, it would quickly add up. No, the fat cats wouldn't like that, would they?

It will cost $1billion to set up the system and $$$hundreds of millions to maintain and administer it. So when does everyone think we will start seeing subway improvements? I say maybe by 2040 ...or never.

Oh Great give the politicians more money to throw at problems that have nothing to do with the MTA...

We needed this decades ago.

The whole problem is that the city is now filled with uber and Lyft drivers. They never should have been allowed to operate in NYC without a cap of how many drivers each of them can employ. It seems like anybody with a car can drive for Lyft and uber and that's not right. They need to limit these car companies. Not to mention that most of them are terrible drivers and arent screened properly.

And the cost of weekly/monthly MetroCard's and tolls still go up.

And I saw the boy mayor took the subway yesterday. Wonder if he paid the fair or did an aid just open the exit door and let him walk through for free?

"would install electronic tolling devices on streets south of 61st St."
So how many of these setups would be needed?
Wouldn't it make more sense to simply electronic toll the inbound lanes of the four East River crossings with a modest toll? I dunno, $3.00 let's say.

Will this now prompt Citibank to return to LIC? And Alexandria to use the Willamsburg Pfiser facilities? And Google to expand instead to Hoboken? And the Aqueduct convention center to boom?

This is not right. What is happening to our once great city?

Time to move folks and have the socialist-commie pigs enjoy their illegals to full extent. According to socialist-bolshevik communist dogma all your money, property belongs to them.
Soon they will have first right to your wife, fiancee, daughter.
This is not what America is about, this is not what our founding fathers envisioned for our great land. These are scumbags that get voted in by the totally dumb, uninformed population who get their brainwashing from MSM. They really - the commies - belong to jail. All of them.

"Time to move folks and have the socialist-commie pigs enjoy their illegals to full extent. According to socialist-bolshevik communist dogma all your money, property belongs to them."

I understand your frustration, but this was first brought up by the fun size mayor, Mike Bloomberg, who wanted to charge the citizenry 9 bucks for the privilege to drive in Manhattan way before the scourge of the app-hail industry and it was immediately dismissed by the state senate.

It's not socialist or capitalist ideologies that are threats. It's the vainglory of power addicted politicians and their avaricious benefactors influencing policies to enrich themselves.

The only socialism that's happening is socialism for billionaires and millionaires. And rich transients so voter turnout remains low.

Frankly, Gianaris millionaire tax was the best idea in retrospect. And legalizing pot would make congestion pricing moot, but that explains why Albany's slow to do it.

Wrong! Bloomberg is just an other scumbag socialist.
Socialism is a BIG THREAT for this great country, you see it on display everyday.

Nice to see once again that the only thing the Governor and the Mayor can agree on is screwing over Queens residents.

Before WW2, NYC was represent in half of all the standard industry codes.