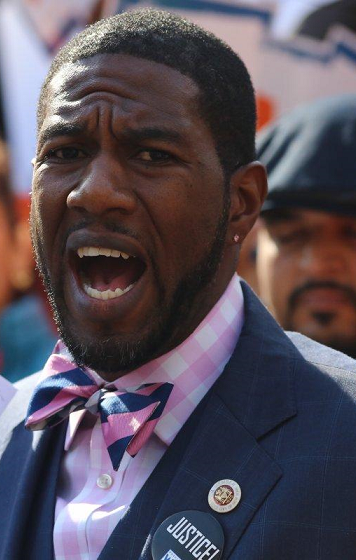 Williams captured 33 percent of the vote in the jampacked 17-person race, besting his closest rival by 14 points.

“I’m still in shock, I gotta tell y’all,” Williams told supporters in Brooklyn afterward.
The celebratory mood turned emotional as he acknowledged his struggles with mental health.
"I’ve been in therapy for the past three years, I want to say that publicly. I want to say that to black men who are listening,” said Williams, 42, struggling to complete his sentences.

“There was a time when the title I held was my identity, and that’s a dangerous thing. The best time came for me when I realized no matter what title I have, there is a space in the world for me and I can make incredible change.”

There will be little time to rest for Williams. Tuesday’s vote was a special election to fill the seat left vacant when Letitia James became state attorney general. Petitioning to get on the ballot for the June primary is already underway.

The special election may end up costing as much as $22 million — almost $55 per voter.

The city Board of Elections estimated that staging the vote would cost between $11 million and $15 million. Additionally, city taxpayers shelled out another $7.2 million to provide public financing to the candidates who applied.

NY1 estimated that 9 percent of the city’s nearly 4.7 million active registered voters turned out.
Williams, a longtime activist, finished 14 points ahead of the second-place candidate, Queens Councilman Eric Ulrich, who captured 19 percent of the vote.

Now that a fauxgressive hack won, de Blasio can ditch town and continue his idiotic quest for the presidency. Williams didn't spend the most money in this stupid election for this bogus job for nothing.

Another empty suit in a do nothing job. He won with only 9% of registered voters voting.

Hardly a vote of confidence or a mandate. A people get the government they deserve.

With the butthead in chief

the city is lost

Does this mean there will now be one more special election, to replace Juumane Williams in the City Council?

"...his struggles with mental health."

NOW we find out?

What a complete waste of the cities monies to have to hold this special election (fifteen million dollars) and the office itself is useless particularly since the Mayor controls the budget for this office. Since the position is suppose to provide some oversight to the mayors office what do you expect happens when the Advocate starts to make the mayor uncomfortable you cut their budget of course. This will not happen in this circumstance however.

If you insist on having this office than at least have a separate independent budget and allow the Advocates office to have access to the 311 complaint information that come in so they know where to focus in on as it relates to agencies failures.

This wont last too long. The guy has some shady dealings.

Ugh. At least it wasn't MMV. Are they going to hold another special election for his seat on the city council?

"This wont last too long. The guy has some shady dealings.'

Wrong.
As Sliwa would say, his complexion is his protection

Seriously, what's he got?

Jumannji Williams is going to have a tough time making changes because of the progressivw wing or mafia that has taken over city hall.

f Mr. Williams can make "any" change as New York's Public Advocate, he will be the first. Can anyone remember the last Public Advocate without looking it up? Doubtful!
————————— ———— ———— ——-
Leticia James, unless you count Corey Johnson talking the spot in the interim. Why would you assume nobody on this page would know that without having to look it up? She just ran a highly publicized race for NYS AG, her name. As well as Johnson’s, has been everywhere over the past few months.

Ju-mahneee is your next mayor, jerk-offs. And you deserve him.