George The Atheist eyewitnesses Flags of China displayed during Lunar Parade in Flushing. 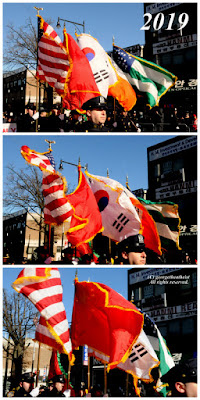 
During the 2019 Flushing Lunar New Year parade the New York City Police Department's ceremonial color guard carries 2 new additional flags:  that of communist China and free Korea.  Conspicuously absent: that of free Taiwan. Note in the photos below, the prominent position of the communist flag next to that of the American.  Who decided this? 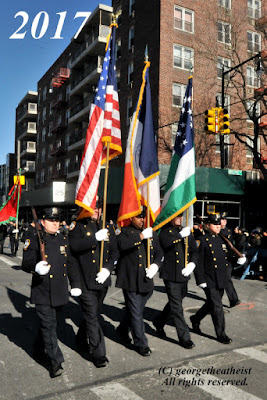 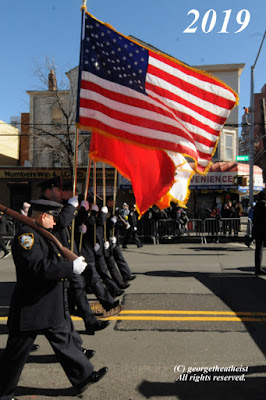 Flags of Red China spotted at the annual Lunar Parade in Downtown Flushing along Main Street.   Parade officials have no idea who sponsored this outpouring of support for mainland China. 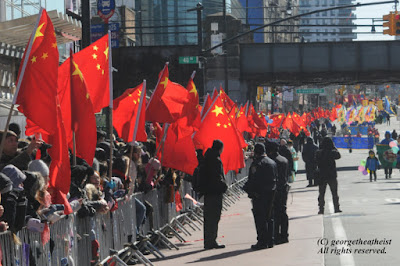 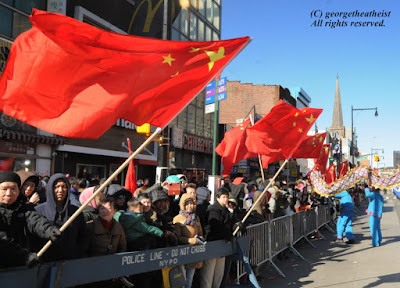 Oh, what a crock of bullshit.

I live a block from The Avenue Of Parades (5th). --Every one of the parades had a predominant ethnicity which holds it's flag out in front.

BTW: China is neither "communist" nor socialist. It is simply a dictatorship, not unlike the "democracies" we inflicted on Latin America and the Caribbean.

Types like "George" are just trying to stir the pot with more "war on......" propaganda.

Ha - while we look at the Mexicans for taking those dish washing jobs please take a look at what's really happening especially in queens. Flushing / Elmhurst / Middle Village is being bought up by Asians. They do not take low paying jobs but teach there kids to be doctors and study hard. High paying jobs in all the fields will be going to Asians. Yes this comes off very racist but let's look around people. Do we not remember the birth house anchor baby stabbing???

China already gets a lot of our manufacturing jobs outsourced and they are putting alot of purchasing power into construction development in NYC.

It's going to be very interesting to see what happens in the next 10 years.

The parade is officially the Lunar Parade. Not the People's Republic of China Parade. Note carefully in the NYPD color guard 2019 photos the presence of the flag of South Korea. The Lunar New Year is a joint celebration of the Chinese AND Korean ethnic communities. So where's the official recognition of the Republic of China, Taiwan, in the marching of the NYPD color guard contingent? What, Flushing's immense Taiwanese immigrant population is chopped liver?

Purposeful omission by the NYPD? A payoff? Or snookering of the NYPD ignorant?

I call for an investigation. And that SEA of red Chinese flags was funded and organized by someone. Who?

Usually at other ethnic parades, the nationality marching displays, along with its flag, the American flag. How come those flag-waving spectators along the Main Street march route were only waving the Chinese Communist flag?

I think the point GTA is making here isn't redbaiting, despite the usage of Red there, is that this was just implemented and the fact that China is a dictatorship under an autocrat who made his position permanent, which our own president congratulated him on "achieving extraordinary elevation" (!!!) on his social media account, does give this display conflicting significance.

Sure we see flags like these unfurl at Puerto Rican, St. Pats, Columbus Day (when turnout used to be higher), Dominican, Carribean and even Gay Pride, but seeing those flags, as well as the size of them all in a row, is very surreal. But I guess this was done for inclusivity purposes.

It's Bizzaro World, we just live in it.

The Chinese Gov't paid for it. My step mom got 50 bucks and a box lunch to wave a Chinese flag when Xi visited Florida.

Next year, Trump will insist all flags must be North Korean. That's what a little love will do......

I never see the Chinese holding American flags on any of our holidays. They LIVE in America but the majority of them dont respect America or its culture. Most of them only come here for monetary purposes. Very few of them celebrate American holidays. They dont even want to celebrate Christian holidays even though they "claim" to be Christian's. They only care about this lunar new year thing that is only celebrated in mainly Asian countries. They will NEVER pledge their allegiance to America. I read an article that even the priests in China would put China in front of God any day of the week if they had to choose. But NYC was sold to China anyway I believe....but of course that's my own speculation.

The massive display of red Communist China flags was the human equivalent of dogs peeing to mark their territory. Anyone who lives in Queens, particularly northern Queens, knows that the Chinese are buying up real estate left and right, often for cash. Some of them actually show up with physical bags of paper money. Where is that money coming from? How do often bedraggled looking people blithely hang over a quarter of a million dollars for a co-op apartment, or over a million for a single family house? Streets that used to have English signs over stores now sport Chinese signs. Obviously these peoples' purchases are being subsidized by the Chinese government. I heard that the Chinese churches distribute the money the Chinese government shunts through them for purchase of American property. So, this massive display of red Communist China flags was merely a physical demonstration that "We are here and we are taking over." I fear we're going to see a lot more of this, as the purchase of American property continues, rendering neighborhoods unfit for anyone to live in except for more Chinese, who don't want to learn English, don't assimilate, and don't even deign to speak to non-Chinese neighbors.

We had a little emergency here yesterday, in that a co-op neighbor across the street could not be reached by phone, knocks on her door, etc. for 2 days. Her niece came knocking on our door, knowing her elderly aunt and wheelchair bound uncle often came over to play with my downstairs neighbor's small children. She wanted to know if WE knew where her aunt was. I suggested a call to the local precinct for a welfare check. Turns out the elderly aunt was at a local rehab center with her husband, who had become ill. Now if the Chinese takeover had been complete, the poor niece would not have had anyone to turn to for information. They are turning America into a foreign country hostile to anyone not Chinese.

I can see the hub-bub but don't think much will be done about it til the people feeling left out say something? Maybe next year there will be some Taiwanese waving an even bigger TAIWAN NUMBUH ONE flag, lol

From the photos, check out the exact, even emplacement of those red Chinese flags along the parade route. Definitely not sporadically heart-felt. This display was quite sinisterly well-orchestrated.

There were dragon flags, and a blue sun quarter on a red flag. But red represents the Han people, just as in Russia, Red, Kranso, means beautiful. No doubt, there are other flags that could be flown, but you need to concede that since the USA only recognizes this manifestation, it is moot to argue. What bothers me more is those who still display pictures of the murderous Mao. Yes, I have seen Mao posters in downtown Flushing. That is worse.

Just 2 days ago, at the time of this Crapper posting, David Brooks of the NY Times tell us exactly why we have to fear the so-called "People's Republic" HERE.

For those of you wondering why I refer to the so-called "People's Republic" of thieving China as Red China, Communist China, etc. - "red-baiting" if you wish - check out the history of the flag's communist/collectivist design and the significance of that design HERE.

Thank God I live elsewhere! We only fly one flag, the Red, White and Blue. Long may it wave.

The destabilization of the nation-state is a well funded effort and it is pervasive in the west. It isn't just Soros.

And it's not about "free speech" either. The left has made an about face on free speech in the past two years, saying it is a form of weaponized white nationalism.

Take Vox Media for example: their holdings include far left antagonizers like Jezebel. But their holdings also include Curbed. Real Estate and leftism: perfect together.

The idea of all this, imho, is to get more and more single family homeowners to sell. To destroy the capability of nuclear families to exist. Then the REBNY moves in, tears it all down, and erects lego housing for affluent single mothers, the immigrants that they revere, and anything non traditional.

Ask yourself: why is there so much money in leftism?