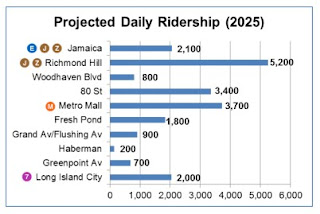  Initial analysis shows that it would be feasible to develop joint passenger-freight operations on the Branch, allowing for robust transit service while maintaining and upgrading freight operations if desired.

 Approximately 21,000 riders per weekday and 5.8 million riders annually would use the service, assuming a $2.75 fare, a free transfer to MTA Bus or Subway, and relatively frequent service throughout the day. Fare revenues are estimated at $15 million annually, while annual operations and maintenance costs are estimated at $55 million.

 Capital costs while maintaining freight service on the Branch are estimated at $2.2 billion, including substantial upgrades to rail infrastructure (track, signals, communications), new running track in key areas, new freight yard space to clear track for transit operations, transit vehicles, a storage and maintenance yard for transit vehicles, and property acquisition. Eliminating freight service altogether on the Branch – an option not analyzed in this study – would reduce total capital costs to about $1.1 billion. Value Capture financing, using a portion of the increase in property values induced by this new transit service, could potentially fund $300 million in bonds, or roughly 27% of total projected capital costs for passenger-only rail operations on the Branch and 14% of such costs under the analyzed option of both passenger and freight rail operations.

Bottom line: Way too expensive + not enough riders = a no go. The mayor actually said this in front of Liz Crowley back at his December 2017 town hall meeting in Glendale. The DOT quietly threw this up on their website, probably because they didn't want to call attention to the fact that their agency and the council member blew $1/2M on this nonsense. The taxpayers' loss is AECOM's gain.
Posted by Queens Crapper at 12:34 AM

$309,000,000 for ground level train stations, are they crazy ?
Out east and throughout the northeast rail line uses simple gravel, concrete and wood construction. The stations work fine and cost less then 1/15 the numbers posted here !!
Fresh Pond already has a cement platform & steel crossover steps that can be rehabbed for under 2 million dollars (and that would included a cut for the racketeers)

get a life we need more options for travel