Tenants claim that illegal construction is being used to evict 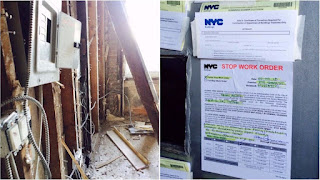 East Williamsburg residents are taking a stand against their new landlord, who they say has been threatening them and using illegal construction to get them to leave their apartments.

The tenants of 272 Stagg St. were joined on Tuesday by dozens of housing advocates with St. Nicks Alliance and the Stand for Tenant Safety Coalition as they rallied against landlord Silvio Cruz outside of their building.

“The tenants feel very unsafe,” said St. Nicks Alliance deputy director Rolando Guzman, who has been providing counseling services to the tenants. “Before the construction started, the landlord's contractor told one of the tenants, ‘you need to move out or you will be put in shelters.’ ”

Since Nov. 14, the building has racked up 17 complaints from the Department of Buildings, two of which remain open, as of Tuesday. The complaints ranged from construction without a permit to cutting off gas to part of the building and an inadequate tenant protection plan, according to DOB records.

Guzman said the tenants have been filing complaints about Cruz and the construction work since November, when he bought the building.
Posted by Queens Crapper at 5:05 AM

The paltry fines are just a small cost for doing business for the Gentrification Industrial Complex.

One day, this is going to escalate into violence between the residents and the saps doing the slumlord's bidding.

That is 10000 % TRUE. it's been happening alot in Williamsburg and Greenpoint.

This is why I left the area for Queens almost a decade ago. I grew up around the corner. My parents live and own there, as occupants of their single-family home, and landlords to a small mixed-use building next door (ground floor commercial, two units above, ea. rented to ~2/3 ppl).

It was and still is insane, in terms of building out there. My parents' home shakes from the vibrations of yet another ugly block going up diagonally across Grand. There's absolutely no reasonable or sane limits on anything - you get beautiful brick buildings with aluminum-sided floors "plopped" on top of their former-top floors, like a messy ice-cream sundae. It's atrocious.

And for what? To cram more poor Mid-Western waiters into fire-traps? The people that used to live in Williamsburg, Italians, Germans, Polish, and the Puerto-Ricans who weren't in public housing, kept their homes beautiful and nice. They were small, and cramped, but they took pride in their homes. Now tons of Jews are gobbling up property, coming up from Hasidic-land, and the rest is a buffet for the Masseys, Knakals, Cushman, Wakefields of the world...nobody lives in the places they may also rent out, so, not being part of the neighborhood, they could give two craps what happens to it for better or worse.


Tenants have no way to win when the landlord wants them out.

If they call the city on the landlord, and the building has a violation that makes in uninhabitable, the tenant has to leave.

If they let an inspector inside, the landlord will just not renew their lease or wait until they are late on rent and file for eviction. Or, they stop doing repairs, etc.

Robert Moses used construction of the Cross Bronx Expressway to evict a whole neighborhood. They were demolishing buildings from the top down to urge occupying tenants on lower floors to leave.
NYC has become a very expensive heartless address for the young to try and make a life in.