Subway repairs are of concern in Astoria 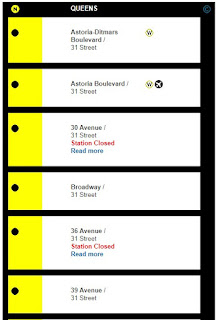 The MTA is planning to begin a 14-month, extensive reconstruction of the Astoria-Ditmars Boulevard subway station this April that the authority says is needed to rehabilitate what it considers a dilapidating, century-year-old station. There are rusted-out holes in beams and the wooden staircases between the platform and mezzanine buckle under steps from commuters. The station will remain open during the repairs.

But elected officials slammed the agency for poor public outreach — local politicians were notified Monday; not including the addition of elevators in its repairs; and for tacking on the construction while the 30th Avenue and 36th Avenue stations remain closed as part of a separate, controversial renovation program. Since those two projects began this fall as part of what’s known as the Enhanced Station Initiative, it’s apparent that any good will between the agency and the community has been lost.

Shams Tarek, a spokesman for the MTA, said that only one staircase in the Ditmars Avenue station will be closed at a time as crews work to fix crumbling staircases, concrete slabs and support structures. New lighting will be added. The leaky, wooden roof will also be replaced with a new steel structure and new outdoor windscreens will be added. The agency will also renovate and balance platforms to fix gaps between trains and the platforms and make small changes that will improve access.

Staging for the project will require the complete curb space under the Hell Gate Bridge overpass, but it will not block businesses nearby, Tarek said. The project will cost the MTA $22 million, the elected officials said.
Posted by Queens Crapper at 12:13 AM

I think we have figured out a pattern.

The politicians hide what they are doing behind their fake civics and pompous community boards and party run broadsides masquerading as newspapers knowing you will never be curious enough to look into things on your own for a wider range of information. After all they smile at you, pick up a piece of chalk to give the kids a brief talk about school safety, pet babies, hold hands of the elderly, and give coats and food to the needy - to say nothing of funding that all important place for people of uncertain gender to congregate.

But when the cameras are off, the human stage sets are sent home, jackets draped on the back of chairs, and whiskey is poured in their little clubhouses, they agree to development with no regard for infrastructure cause they know you can be duped every time
with all that fake civic structure they have in place to hide and disguise what is going on.

The pattern is set and can be repeated with the same easy familiarity as the Lords Prayer.

(2) Then they deflect it on the (MTA, Amtrak, Port Authority, etc).

The politicians are either (1) not doing their job by being briefed on things that are publicized months if not years in advance, or (more likely) (2) hide things until the development is in place and the shit is hitting the fan, and push the blame on someone else knowing your innocent trust in everything they say - and your mute acceptance at paying for their antics.

Everything is becoming s concern in Astoria. Developers have been butt buggering the nabe for years...EXCEPT....where Vallone lives. Pave over the East River so everybody can walk to Manhattan without having to rely on a poorly maintained transit line.

All those folk are yesterday's news in the brave new world of Nancy, Chuck, and the mayor.

This is what happens when the machine runs the show...Gianaris and crew have a press conference, feign outrage, and it looks like they are doing something. Meanwhile, the transit situation gets worse and local small business suffers.