Bill sticking taxpayers with quite a tab 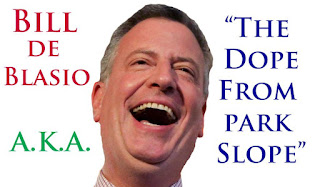 The city quietly posted notice of a proposed $2.6 million contract between the Law Department and Kramer Levin Naftalis and Frankel LLP — Hizzoner’s law firm — in the City Record Friday.

The contract is “to provide Legal Services to the mayor in connection with an investigation by the U.S. Attorney’s Office for the Southern District of New York and related work” from 2016 to 2018.

The firm represented de Blasio and others at City Hall in a series of investigations into his dealing with fund-raisers — including Harendra Singh, the businessman who pleaded guilty to bribing the mayor. The mayor and his staff were not charged or convicted of any crimes during the year-long probes — but racked up quite a legal bill.

And the taxpayer-funded tab is expected to keep climbing.

“No,” spokesman Eric Phillips said when asked if the $2.6 million was the full legal bill to the city. “When there is a final, complete amount we will release that figure.”
Posted by Queens Crapper at 12:48 AM

Now, I understand why organized crime exists (and always HAS, when power seized corporate fascists like de BLASS-hole are allowed to practice their graft openly, and at obscene, taxpayer expense)!

But, if John Gotti were alive today, he would relinquish his Capo position (as well as ALL ties to the mob, and a life of crime), and simply practice corruption, graft and endless greed LEGALLY, by partnering up with de BLASS-hole!

❝Government is a disease masquerading as its own cure.❞ — Robert Lefevre

❝To learn who rules over you, simply find out who you are not allowed to criticize❞ —Voltaire

❝It is easier to fool someone that to tell them that they've been fooled.❞ —Mark Twain

Why do we have to pay for his crimes??

"Why do we have to pay for his crimes??"

because the sheeple re-elected this bag of crap.

We pay for his crimes because the stupid outnumber the educated in this city.
Just look at the election results and its only going to get worse when these near million American born children of illegal immigrants start voting.
That compounded with the fact every kid in school has been brainwashed into socialism and is told they are entitled to everything regardless of how hard they work, regardless of what fields of work they studied. Liberal arts & sciences finger-paint included.
I worked on a Rocket & Mercury capsule restoration project some years ago. (note: not one person involved with that has a job there today)
Go to that Hall of Science after school, all you see is foreign looking people working and kids playing games, making dolls with glue and construction paper, finger-paint etc. Some conference room being used for a class (in Spanish) on how to qualify for Medicaid and state benefits card.
That new wing, what our 500 million $$$ paid for is used for schmoozing and babysitting with the citys blessing.
New York City and what "WAS" once America, capitalism is in deep shit and I see no chance of stopping the decay.

Imprudent hand fed sheep will outnumber and there is no way of changing that math in NY. Ask any NYC high school kid what socialism is; you'd be shocked at the response.
It seem's near All these Millennidiots blame us for college debts and them not landing a 300K 1st job with degrees in arts and liberal sciences. They been educated that capitalism is a selfish, anti communal evil malevolence that needs to irradiated. ENTITLEMENT to everything, all of us shaken upside down for every penny to indoctrinate and embrace the very euro-socialism the mayor wants.

That's what we are dealing with. And people like the mayor, school teachers are playing & cultivating them like young crops of asparagus.

This is blatant arrogance and corruption. This alone is proof that there is something very rotten in our end of Denmark. I didn't do the crime, WTF should I have to pay a cent of his legal fees? Will he pay my next bloated ass camera or red light ticket??

The "Dope from Park Slope" graphic undermines the Crapper's goals by making it hard for people to take you seriously. Name-calling and insults don't help convey your message; they just make your site appear amateurish.