Koslowitz ok with jail (and shelter for now) 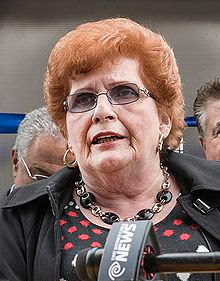 The city will start housing homeless families instead of single men at the Comfort Inn in Kew Gardens beginning in June, and the hotel will stop being used as an emergency homeless shelter altogether by Feb. 12, 2019.

That’s according to Human Resources Adminstration Commissioner Steve Banks, who made those promises in a Monday letter to Councilwoman Karen Koslowitz (D-Forest Hills).

In return, Koslowitz — who shared the correspondence exclusively with the Chronicle — said she will renew her support for the reactivation of the Queens House of Detention as a jail, should the facilities on Rikers Island close as planned.

The lawmaker exclusively told the Chronicle two weeks ago that she was yanking her support for the QHD proposal, citing a larger-than-planned influx of homeless men the city was housing at the 123-28 82 Ave. hotel just a block away.

“It was a matter of a few weeks that it all transpired, right after it was in your paper,” Koslowitz said Wednesday. “I got the commitment Friday. The commissioner called me on Friday and I told him I wanted it in writing.
Posted by Queens Crapper at 12:11 AM

Here is what progressives like De Blasio have to offer
https://www.nbcbayarea.com/news/local/Diseased-Streets-472430013.html

So let's get this straight. Councilmember Koslowitz is "happy" that the greedy Comfort Inn is switching from problematic single homeless men (ALWAYS a BIG PROBLEM) to families then ending as a homeless shelter in February of 2019 as stated by the deBlasio administrator who helped to create this HUGE MESS of the profit making homeless business, Human Resources Administration Commissioner Steve Banks. RIGHT, it will close in Feb of 2019 and the all of a sudden, there will be some bullshit emergency to have to house people who plopped off a bus in NYC with no money and no job.

But this do nothing Kew Garden/Forest Hills councilmemember (who by the way ran unopposed in the last election), well, DID NOTHING when this Comfort Inn turned into a reckless homeless shelter (which has produced several men begging for money and bothering residents loitering on Queens Blvd). AND did nothing when this hotel, which is very out of place in the Kew Garden area, was being built (I did not know that Kew Gardens was such a tourist attraction that Kew Gardens needed a huge Comfort Inn). AND by the way, something that you hear from no one, IF, the numbers of homeless drop way down, then what happens to all of these hotels that were built pretty much for the homeless. I mean, it is not like these were apartments, they were built as cheap shitty hotels, many in out of the way places. AND what happens to the Comfort Inn, where there homeless cash cow ends.

Now with a jail recently announced coming right across the street from this problematic homeless shelter, expect not only "wandering souls", but a MAJOR parking problem in an area, where parking is already an issue, plus the idiotic removing a 500 parking lot to bring it back at a little more than 1/2 of its former capacity.

Koslowitz, is like many other city councilmembers, like former member and now senator, Leroy Comrie of Jamaica (which has over 25 homeless shelters and rising), ALL TALK, NO ACTION. Typical so-called "leadership" in Queens and NYC government.

In the meantime, take a look the new SKID ROW of Forest Hills at https://thefilthofforesthillsqueens.wordpress.com/ where a just a few blocks away, is Forest Hills Garden, home of multi-million dollar homes.

It seems that dirty winds of Jamaica and SE Queens are blowing in the direction of Kew Gardens/Forest Hills.

Uggh!
She looks like an ancient truck driver in drag!

There ought to be competency tests administered to old politicians like her.

This woman is a plague and a cancer on the community. and a promise from Banks is about as useful as a massage from a leper. both of these idiots need to be tarred and feathered and run out of the city.

She's ok with her going to jail? Cool!

What I'd like to know is, why does the mayor and his administration pretend that the Council has any say in the matter on the Rikers shutdown? They can do it by fiat, even if the whole Queens delegation comes out in strong opposition. With the exception of Bob Holden and Barry Grodenchik (any one else?), they're all term-limited out anyway. When the shelter first came to the Comfort Inn, Koslowitz was completely at a loss to do anything and just said "you couldn't warn me?" Now that a change is happening, she's positioning herself like she was this big power broker. Well, if you and your fellow hacks in Queens can really hold up the Rikers project, why don't you? Oh, did REBNY tell you by hook or by crook they were going to get their hands on that plot of land so near Manhattan?

"The city will start housing homeless families"
-------------------------------------------------------------
Haa Haa yea right !!
Translation = Illegal immigrant family units as they say.
Add feral disruptive kids who cant even write or speak English sharing classrooms with your kids. The teachers and security guards will have to stop every 5 minutes to deal with them. This will become permanent housing once a kid is registered to a school.
I remember these big dumb Slavic refuges being dumped in my 7th grade classroom at JHS93 in the 70s. They were bigger, older and crazy disruptive. Not one of them could not read or write and had demeanor & behavior problems. Were always trying to touch the girls and acting out. The teachers couldn't teach, fights in a cafeteria over these older big thugs grabbing brownies and things off trays. The class was totally turned to shit overnight.
Big trouble coming, Oh boy !

The people need to fight this, go to her home and protest

I wrote in a "box of rocks" on my ballot.

Retire. Take you pensions and go run for the board of Phase 3 in Boca Del Vista.

I always thought Koslowitz looked like Jack Nicholson's "Joker", but I think as she continues to age in office, she's started to look more like Cesar Romero's earlier version. Between her and Stavisky, makes you wonder what Queens did to possibly deserve them...