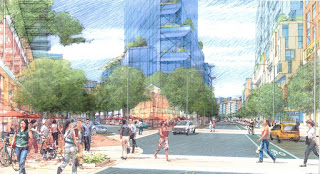 While a slice of bread is better than nothing, it is a poor substitute for the whole loaf, particularly if the single slice is stale.

The Feb. 8 Queens Chronicle editorial “Is the future of Willets Point finally here?” is legitimate in utilizing a question mark. It has been 10 years since approval of the 2008 Willets Point Plan, which involved 23 acres with 5,500 housing units. The current plan is limited to six acres said to accommodate 1,100 affordable units, a 450-seat elementary school, retail and some open space. Six acres is a pittance, hardly enough space to accommodate just a school, let alone what is planned. The bulk of the area consisting of 17 acres is left in political hands, and at this time is left open without the slightest transparency of what and when anything of substance will come to pass.

Given the length of time that has transpired since 2008 and continuation of involvement of the Queens Development Group, which consists of the Mets ball club owners, the Wilpons, their Sterling Equities and the Related Companies, one must have deep concern about the current proposal.

The QDG’s credibility is so slight it could not be visible even under a powered microscope. It was deceitful in accepting the original plan because what the developers really intended was to build a gambling casino, and when that failed, the project lay dormant until they came up with an even more absurd plan. They claimed they could not proceed with the original plan because they could not afford to do so, and needed to construct a 1.4 million-square-foot mega shopping mall on the Citi Field parking lot to generate the money they would need. The QDG’s owners had a portfolio of at least $20 billion consisting of many apartments and were in fact one of New York City’s largest landlords, and owned thousands of other properties in the country.

While there may well be “nothing rotten in the state of Denmark,” methinks there is something rotten in the City of New York. There has been no explanation for the current plan and no rationale for not including the left out 17 acres — nor any justification for why the original 2008 Willets Point Plan cannot now be accomplished. Mayor de Blasio’s support for an absurd six-acre deal is a sham for which he should be ashamed. The six-acre plan is the epitome of a lack of municipal transparency, and must be rejected.

Benjamin M. Haber
Flushing
Posted by Queens Crapper at 12:40 AM

But the people moving there will not mind the tight space. They're used to it.

Yep! Taiwanese and Fujianese peasants are quite used to living with pollution and squalor. Who else will be clamor info to live there?

Leave it to go natural, there is no room for people . Too much traffic now......there is a bus depot across the street! The area just can’t handle it.

BY THE TIME THAT SITE IS COMPLETE DIBLASSIO WILL BE IN A NURSING HOME.
EVERYTIME THERE IS PROGRESS WITH THIS PROJECT SOMETHING ALWAYS COMES ALONG TO DELAY IT !!

Drive out to the Meadowlands in NJ. They still working on that crappy mall from 2005 that never opened. Same here. Money will come and go. Expect a lot of rusted half built shit for another decade.

Since the days of Donald Manes the area has been under fire! Remember the Grand Prix race tack he wanted to construct around Willow Lake?