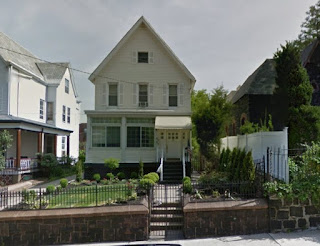 A single-family home that was built nearly a century ago was recently demolished to make way for a 5-story residential building.

Demolition permits for the 2.5 story clapboard home, located at 23-23 30th Rd, were filed in August, and the demolition began in December. The property was bought by 23-23 Astoria LLC in June for $3.1 million.

The 93-year-old house will be replaced with a 16-unit apartment building, which will be 12,495 square feet and 50 feet tall. The owner filed for building permits on Friday.

An outdoor recreation space will be located on the roof, and a lobby and bicycle parking facility will be on the first floor.

An ambulatory healthcare facility will be located in the cellar. The building will have a driveway.
Posted by Queens Crapper at 12:33 AM

How disgusting! Who wants to live in a place with a medical waste dumpster? Another tragedy!

If they are going to squeeze all those apartments and amenities in that one space, then it will truly be the 9th wonder of the world.

Now the question: What was the selling price demanded by the previous owner?

If it was too high for the neighborhood, only someone with redevelopment plans will bite.

This also sets up an expectation among other wage slaves in the area who own homes and they too will have dreams of high sale prices. This in-turn makes zoning changes a fight among neighbors.

A friend who I helped buy a two family in Sunnyside is being badgered by a neighbor who wants to buy his home and two others. These places are all just off Qns-Blvd. His plans are an apartment house.

Seems that the investors are following the existing zoning regulations.

Why the anger towards the new owners?

It is the unaccountable bureaucrats and approving elected officials that provided the means to move this project forward.

The bicycle parking facility alleviates all of the parking issues!

It will be beautiful...

Medical space in the CELLAR? Sounds like a potential disaster...

WHAT A FUCKING SHAME. ONE OF THE NICEST LOOKING PROPERTIES IN THAT WHOLE AREA.

Thank God for the bicycle parking!

The point is that the elected officials in successful communities throughout Manhattan and Brooklyn, where there is a real sense of community and nice neighborhoods as well as good home value work with preservation groups.

In Queens the elected officials fight groups that are trying to do this - they are all on the take from developers and do nothing to wise up residents on how they are getting ripped off.

In Queens the top of the feeding chain are running little more than money laundering operations with revolving door eateries and silent partner real estate deals. Read the Astoria paper and see all the people that are mentioned week after week after week - they are behind this. They have sold their community down the river.

I'll reserve my judgement until i see the beautifully colorized artist's rendering of what the new building will look like.

i do love a good art class display.

At least they'll be making good use of the roof, more buildings need to do that.

To the blogger who said: "This will be beautiful..."

ARE YOU HIGH !?!
It will be an eyesore. This looks like a neighborhood with 2-3 story detached homes - NOT ENORMOUS APARTMENT BUILDINGS. Where are the property owners and community boards in this area ? How could they allow this without a fight !?! This entire city is turning to SH*T !!!!!!!!!

Where is there room on this land to even build that?

Look what Costa did to the Steinway Mansion and the Dulcken House. Look at the front page of this weeks's Queens Gazette where he looks like a heroic figure.

Look at the passive community in Vallonia who spend the time looking at pictures from the 1960s of the Hell Gate Bridge, and the hipshits standing in line at Queens Comfort.

Martians did not do this to this community. The community did this to themselves.

Most communities, with a shred of self-respect and sense would never do this to themselves. End of story.

Unless you're in the good section of Astoria, you're gonna get crapped on.

Unless you're in the good section of Astoria, you're gonna get crapped on.

there is no 'good' section of astoria. people in sunnyside talked like that too until recently. vollonia, you are next once they put in the transportation arteries to the waterfront you are f*ked.

maybe you guys need to stop taking pictures of the hell gate bridge and start to walk around - its a big world outside of your little coop besides those buildings up there are no doubt the ugliest buildings in western queens.

The tax revenue system is driving this insanity, 16 units will generate more in taxes than a single unit.
We all pay for this type of corruption.

""Martians did not do this to this community""

Actually Martians did because Martians and these foreigners are the same shit.
Swarms of locusts and foreign born urchins parachuting in from all over the planet. A class of people most who have no problem living 7 to a room.

The mayor may as well be atop the Goodyear blimp or Empire State Building waving a big "Come And Get It" sign. Today you can walk 3 blocks on Broadway and not hear one word of English being spoken. Chicken shacks, Gay bars, Kabob carts, guys in Kufi turbans driving livery cabs.
That's the Astoria and it voting base of today, a friggan overflowing vat of oozing sores from all over the planet who wanna live like they did back home. As in the f*ck with Americans, America & assimilation.

They're just here to make money to send home (to bring more over) and dont give a shit about nice home's, good architecture our history, heritage and way of life.
This chain immigration, lottery and jumping over fences has to stop, there is no way to sustain services and finance for this. We will crash and burn like the Roman when they left the gates open.

That's what happens when you do nothing but whine and complain Queens people, and find excuses as to why you are treated like crap. You are embarrassing the species. You will eventually become extinct and will be replaced by a higher form of life. Everything you said about the new residents are true, but they are taking over because you don't give a frig. Good for them.

They have Backbone and you don't and in that sense, they are more 'American' than you.

They're just here to make money to send home (to bring more over) and dont give a shit about nice home's, good architecture our history, heritage and way of life.
This chain immigration, lottery and jumping over fences has to stop, there is no way to sustain services and finance for this. We will crash and burn like the Roman when they left the gates open.

OFF TARGET FRIEND. WE ARE TALKING ABOUT ASTORIA, RIGHT? A PLACE OF HIPSHITS AND MEDITERRANEAN HILLBILLIES.

This will be great for the much needed housing crisis in Queens.If more of these developments went ahead it might alleviate shy high rent .

When you take my hard earned money (taxes) and give it away to lower IQ people you are destroying the fabric of America. Hard work and intelligence were the backbone now you have social programs that reward the lower class for making bad decisions.

The OP is actually correct

With Astoria MEDITERRANEAN HILLBILLIES are the ones who live like dogs in order to sending money home to bring more over. The hipshit trust founders are just cash cows getting milked.
Take your $8 beer, cup of fresh goat milk coffee or wheat grass juice (with free creepy crawlies at no extra charge) for example.
Its gotten worse since Greece and Italy gone bankrupt. The euro-trah want to escape and do the same shit here, and this is a good portion driving prices and developers.

The politicians and the community board in Astoria is the worst in the city - they take advantage of those people in their community terribly.

Once a Greek gets something in his (or her) head not even handcuffs will stop them.
That whole community board needs to be flushed and replaced. It’s like having to wash dirty diapers before they fester and stink. (Become corrupted in this scenario)

Astoria as no board, what you have is encircling rink of “know it all” morons with hands in each others laps.

blah blah blah
No money, no talk
Y'all can whine all you want
But money makes world go round
And you can't stop it because you don't have money to reverse it.