Georgia Diner sold and will merge with Nevada Diner 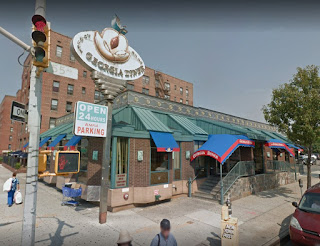 A favorite dining spot along Queens Boulevard is closing its doors after 40 years of serving the Elmhurst community, but its tradition will live on just a few blocks away.

Georgia Diner, founded in 1978, will close at its original location on March 25 and merge with the Nevada Diner, less than half a mile away on Queens Boulevard. John Singh, a manager at both diners (owned by the same entrepreneur, Jimmy Kaloidis), said that the Georgia Diner will bring its famous name and most of its staff to the new location, but not much else will change.

Singh explained that Kaloidis recently decided to sell the building the Georgia Diner has occupied for decades. After selling part of the parking lot to a developer three years ago, Kaloidis was recently offered a price for the entire property by the same developer and decided to capitalize on it, Singh said. The application for the demolition of the diner was approved by the Department of Buildings (DOB) on Feb. 7.

City records show that the diner was sold for $14.25 million.
Posted by Queens Crapper at 12:36 AM

This is sad but good that the guy who owned the iconic diner got a nice payday.

The Nevada is so out-of-the-way. Always looks like no one goes there.

Once again, mourners, diners represent UNDERUTILIZED SPACE to developers. Most serve crap food at high prices. They're only good for so-so burgers and high cholesterol breakfasts. Let's save our crying for real neighborhood landmarks.

Georgia's was nice back in the day, but slid into mediocrity. It became the choice of convenience by virtue of its location near the malls, that's all. WAY better food all up down and Broadway. If you must have burgers and steak, there's Boca Junior, Nevada/Sage/Pops which is quieter and better-served, or any number of corner grills that'll do your standard burgers and 'wiches up nice.

If housing must come to the area, it can do worse than the kind now going up on the B'way/Blvd corners: standard, eh but new and large and spacious. I won't miss Georgia's, except as a convenient landmark for people when telling them how to get to my house, lol.

The development on Queens Blvd east of Queens Center is homongenously drab and apparently 3/4's deserted.

The last time I went to Georgia my burger deluxe was undercooked. That was 2 decades ago. Goodnight to another greasy spoon.

IMHO The only good place for good flame cooked tasty burgers and things is Jackson Hole on Astoria and Bell Blvd. They use real flame grills and wood. All these shitty diners do is fry, fry, fry.

It will never work . Nevada is a dump and Georgia owner is very greedy. It too will close soon as developers make a play for that property as well.

Diners and gas stations in NYC are endangered species. Any 1 story space with a parking lot is going to be sold. Already happened with most Manhattan diners and many gas stations. Queens has lost many diners as well, with Georgia and Neptune next.

^Anon: what will never work? The place is already slated to be sold, owners made bank. As much as I hate things getting built up and over-crowding, it's hard to argue that the hood was noticeably improved in anyway for Georgia's long-overstayed presence.

Nevada might go under too, maybe, maybe not. Really The whole Queens boulevard corridor is going to eventually look like what became of Whitepot when Cord Meyer got done with it half a century ago. Boring towers, but probably a place where middle-class working professionals want to move. The few dinky stores, car-washes and auto-detailing places further down, sketchy night-bars, and motels etc don't really "add value" to the area...in fact, in the case of those motels, they bring whole 'hoods down given who they bring in. I don't want it..but I'd rather have boring housing than any of the aforementioned kinds of places. Really, I don't care so long as the groceries stay cheap and the neighbors quiet.

>Diners and gas stations in NYC are endangered species. Any 1 story space with a parking lot is going to be sold. Already happened with most Manhattan diners and many gas stations.

So that's the mayor's latest plot to stop us from driving.