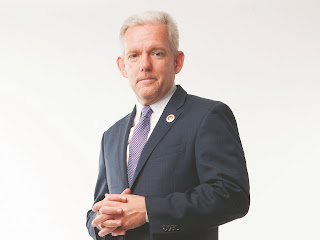 Council member Jimmy Van Bramer has all but announced that he is running for Queens Borough President.

Van Bramer formed the “Van Bramer 2021” committee last week and said that he is limiting contributions up to $3,850. That figure is the maximum allowed for the borough president race and well short of the $4,950 permitted for a citywide office such as mayor or public advocate.

“I’m not declaring for any particular office at this time but I am gearing up and beginning to plan for the future,” Van Bramer said in an interview. “Obviously serving as Queens Borough President would be a great honor.”

Van Bramer said that he will be rolling over $200,000 from his council committee shortly into Van Bramer 2021 and will begin fundraising.
Posted by Queens Crapper at 2:07 AM

All that selling out to the tower makers hasn't actually worked out for Jimbrowski. For this position he's gunning for is actually a step down.

So this should confirm the rumours that Katz is running for mayor.

Katz would still probably be a vast improvement over Mayor Big Slow.

What I heard is the Richard Brown is retiring, paving the way for Katz to become DA. This is why JVB is making this move now.

oh god no, I rather have her being mayor (deeply biting tongue). There was an article in the Sun about Katz with campaign shit under her name and the year 2021

I wonder if Jimmy didn't get the speaker position he coveted because he doesn't have HIV.

He's not going to win. The job is like cryo-sleep for politicians trying to hang onto any power they can while attempting to revive their circling-the-drain careers.

Why do we need borough presidents? We have a City Council that's supposed to represent us. BP's are a waste of taxpayer money. They are all in bed with scheming developers too.

We need Katz like we need a hole in the head. Same for the do-nothing Van Bramer. How in the world did Queens get to be the entrenched center of trash politicians? We haven't had a truly decent pol since I can't remember. Why do we have to expect Awful vs. Not Quite As Awful as our only candidates?

It would make sense for her to run for D.A. Brown's office, as Crapper suggests. It's a lifetime position with job security: Brown has been D.A. since 1991, and he always run for re-election un-opposed (and he doesn't even live in Queens).

Other than the fact that she has zero experience as a prosecutor in any forum; has never priced criminal law and hasn't practiced law in 20 years - yes she'll be great!

Snowflakes will rule the earth once the Democrats retake congress and impeach Trump: https://sites.google.com/site/rtdlies/

JVB was squarely under MMV in the Council's Progressive Caucus. He backed her early in the speaker race to the chagrin, and was rewarded, but now that she's out, Julissa Ferreras did not seek reelection, and DeBlasio, Brad Lander, Jumaane Wiliams, Ydanis Rodriguez and the rest of them are term-limited, the outer borough county bosses influence has reasserted itself.

While it would make sense for Katz to run for D.A., she might be ambitious enough to become the first female mayor. Gale Brewer would probably put up a hell of a fight though, if she got the same idea.

Councilman Lancman is gunning for the DA position - he's been aiming for it for years.

Barring illnesses, Brown will probably serve out the rest of his term.

Isn't that about the same time that Stinky will be term-limited from the City Council? Maybe he'll run for BP, too? Vote for Paulie Grape Nuts for Borough President. The underage kids are already working on his petitions - heck, some of you may have signed them already...

Brown is ill. Heard he has Parkinsons and some dementia. But the Dems want to keep him despite it all. He can barely walk on his own.

Useless person in a useless position.

Another easy hand over of power Democrat style !!

Peter Vallone Jr. has always wanted to be District Attorney. It would be interesting if the race brought us a Vallone-Katz rematch. He's more qualified, but not an ideological fit for Queens.

Vallone will run for DA or Borough President

Did Katz go to the same law school as Lionel Hutz?

Chucky Chew More would rather have his buddy The Donald in the White House than an real right winger like Mike Pence. Most Conservative WANT Trump impeached more than the left does. See http://jackreylan.blogspot.com/

Some set of balls on King Jimmy

Something is up. Skeleton in closet (naw, the current speaker was seen running around with a tiara - yes, its come to that folks, Nero and tha boys.)

How about Federal for this boy. Cabinet guy from NYC if a Dem gets in. Ha, if Trumps fails the country will get NYC in SPADES!

Then the revolt will break out. The genie is out of the bottle. MidAmerica has tested respect and they will not give it up!

So have this guy move forward, by all means.

To the Anonymous who said: "Why do we need borough presidents? We have a city council that's supposed to represent us." That's the problem: The city council is a feckless kakistocracy of empowered idiots and political hacks. Face it, Queens County inmates (and beyond!), We, the People are at the intolerant extremist mercy of 'taxation WITHOUT representation,' and we always HAVE been!

It's exactly the same with our shadow puppet presidencies: We, the People shouldn't have a presidency. The idea of having a single decision maker in a country of 330 million people is fatuous. The only form of leadership that would make sense in a country like ours would be a council of elders, proven men and women in their respective fields. But we are too dumb to consider replacing an outdated 18th century constitution. As a country and civilization we are doomed. The rot has set in and is now far too deep to be removed, even in the remote case that a huge reform movement coalesced. The rot has had decades to become established. Its evident in our crumbling roads, bridges, water systems, our mass incarceration, our corrupt and dysfunctional health care, our opiod crisis, and on and on it goes (where everyone else in the proletariat, rank and file continue to pay a soul-crushing price). There will be no second chance to make things right. We blew it.

❝Men will never be free until the last king is strangled with the entrails of the last priest.❞ —Denis Diderot, French philosopher

I dont want him.
Isn't Van Bramer the guy who harassed a super with Politically correct bullshit over some WWII tribute. Hey if Van Bramer and all his friggan foreigner constituents dont like our history and heritage they can pack up and GTF out because last I checked this is still America and the its Constitution still stands
Enough with this Politically correct nonsense and sanitizing near dam every part of history & heritage.
Eff_ Van Bramer, this pinko fruit loop variant aint getting my vote, jeez this is all Queens needs to completely sink it.

One man or woman can easily be dismissed from their position in this nation. Think about what a group of power hungry hacks can accomplish.

To JQ: Where in my comment do I speak about Iranian clerics? I'm talking about a government 'Of The People, By The People And FOR THE PEOPLE! They type of government that takes We, the People's dismissals seriously (for actionable cause), and to transfer the power back to where it has always belonged (before the kakistocracy of kleptocratic, corporate fascist obedient, monetary locusts broke out in a power coup that left everyone else in the proletariat, rank and file powerless, jobless and at the mercy of subhumans like Paul Ryan, Mitch McConnell, our default President Trump and the rest of the padded cell of psychopaths in BrainWashington, D. C.!

Bend over and get some KY!
We are about to be violated worse!