Plan in effect for small piece of Willets Point 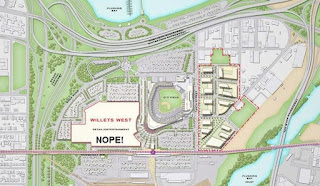 From a mayoral press release:

Mayor Bill de Blasio, Borough President Melinda Katz and Council Member Francisco Moya today announced an agreement to jumpstart construction of 1,100 affordable apartments on six acres of Willets Point – an increase of 225 affordable homes over the original development proposal. The new homes will be the first built on the wider Willets Point site which was approved for development by the City Council in 2008.

The new plan is for three, 100 percent affordable buildings including a standalone building with 220 homes for low-income seniors and also apartments for families at lower incomes than originally proposed. The plan also includes public open space and a new 450-seat public elementary school.

To identify community priorities and produce recommendations for the remainder of the 17 acres of the Willets Point development site, the mayor also announced the formation of a task force, chaired by Borough President Melinda Katz and Council Member Francisco Moya. The task force, initially proposed by Council Member Moya, is modeled on the steering committee that developed the framework for the Greater East Midtown Rezoning.

Who died and left these two in charge? How do you just totally switch around what the City Council agreed upon? Shouldn't the process go out to bid again?

From the outset of the proposed Willets Point development, it has been understood that a developer would be selected via a competitive sealed proposal process.

The City’s selection in 2012 of Queens Development Group (QDG) to develop phase one of Willets Point – to the exclusion of all other firms that submitted proposals – was predicated on QDG’s unique proposal that expanded the project to include a mega-mall on public parkland (leveraging a lease already held for said parkland by the Mets’ owners, who comprise half of QDG).

In the aftermath of the Court of Appeals decision which prevents QDG from implementing its proposal, Mayor de Blasio should have immediately availed himself of the opportunity afforded by the contract between QDG and the Economic Development Corporation (EDC), to rescind the sale of Willets Point property to QDG and cancel the contract award. Then, the City would have been free to issue a new request for proposals (RFP) to the entire present-day development community, for the “new” six-acre project which apparently is now the priority.

Instead, there has never been a competitive sealed proposal process for development of six acres of Willets Point property stemming from the intersection of Willets Point Boulevard and Roosevelt Avenue. Think of it: A reasonably-sized, six-acre project would likely attract a larger pool of developer proposals than did the 2012 RFP which encompassed the enormity of the Willet Point phase one site. There is absolutely no basis to think that QDG is the “best” developer for this six-acre site and configuration, because the de Blasio administration did not implement any competitive sealed proposal process (although it should have done so).

In its article published on February 6, 2018, the New York Times repeatedly refers to the six-acre project as a “new plan” and “new deal.” We agree, but wonder why there was also not a “new” RFP and “new” competitive sealed proposal process to determine it.

Willets Point, in total, is 62 acres. The city was supposed to develop the entire thing. Millions of dollars later, they're settling on 6 acres or 10%. You gotta love our government.
Posted by Queens Crapper at 12:12 AM

Real problem that nobody talks about in NYC government: excessive, unchecked immigration.

The solution to overcrowding is not to build more, but to take in less.

This opens the way for additional changes and probably a mall so the kids living in the affordable housing have someplace to pilfer from.

It will become another slum just like the rest of Flushing.

It's gonna be hard to find people who sympathize preserving a garbage dump and auto junkyard.

More traffic in an already overly congested area. The premise that this will be "affordable" housing is ad-nausea in this corrupt city. Where's all the commerce that provides jobs so people can "afford" housing - sorry I forgot THEY DROVE COMMERCE OUT BY DECLARING EMINENT DOMAIN !!! This is a loser city.

Instead of the mall there's going to be a soccer stadium. get ready for it.

It's an auto junk yard not sacred land. It's over!