Koslowitz ok with either jail or shelter but not both 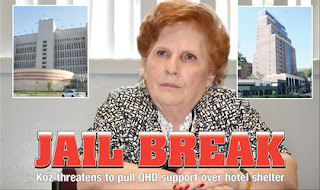 Councilwoman Karen Koslowitz (D-Forest Hills) is threatening to withdraw her support for the proposal to use the old Queens House of Detention in Kew Gardens as a jail again should the facilities on Rikers Island close in the coming years as planned.

The reason? The expanded use of the Comfort Inn across the street as a homeless shelter for single men.

“This is unacceptable. I will not support a prison and a homeless shelter,” Koslowitz told the Chronicle on Tuesday. “I’m not going to do that to my community.”

The Department of Homeless Services initially rented out 42 rooms inside the 123-28 82 Ave. mixed-use building — featuring 84 hotel rooms and 38 apartments — in late September with little advance notice.

But as of Tuesday, Koslowitz said there were 132 single homeless men housed there, eight more than the week before and 48 more than the DHS initially promised the capacity would be.

“The last I heard, it was 84. That’s what they said the number was going to be,” she said. “I have said something to the administration and I will say something further. I’m just too angry.”

Koslowitz, the head of the Queens Council delegation, officially came out last October in support of again using the Queens House of Detention — an incarceration facility until 2002 and a film production studio since — as the borough’s jail once Rikers closes.

According to the lawmaker and her colleagues, housing prisoners down the street from Queens County Criminal Court will save the city millions of dollars in inmate transportation costs each year.

Koslowitz said Tuesday she still believes that is true, but the cost savings simply don’t outweigh the community opposition to a larger-than-expected homeless shelter.
Posted by Queens Crapper at 12:41 AM

Closing Rikers will be a HUGE MISTAKE! Now as soon as the criminals come out of jail, they will be next to schools and homes. They will just be right back in the next day, no doubt! And if we are SO PRESSED for space now in nyc, where the hell will we HOUSE new jails? Come on now, this is more garbage bought to you by mayor dumbdumb! Then when waterfront "affordable housing" (saying that VERY LOOSELY) comes to Rikers, it will ONLY HOUSE more one percenters or people on their way to becoming one percenters.

Fuck that bitch. NEITHER should be okay. One by one, good neighborhoods are being destroyed by plopping fucking homeless shelters (especially for single men)into those areas. Homeless single men are the MOST problematic: drunk, drug addicts, mentally ill (or all three), lazy, chronically unemployed, poor life choices. BUMS, the proper terminology for these bottom dwellers. As far as homeless VETS, well our government have screwed them over BIG FUCKING TIME. These men fight for our country, seeing some of the most horrific things a human being could see and what do they get for serving our country, A BIG FUCK YOU by our government and elected officials, who always claim how patriotic they are. As for the other homeless, fuck them. Don't move to an expensive city or move out or get your fucking life together. Even the ones with kids, I read that these people have very young kids and are living in a shelter. REALLY, you decide to have kids when you cannot take care of yourself and the WE the tax payers have to pay for your fuck-ups. Very few people are homeless because of horrific circumstances, the majority are due to poor choices in their lives.

Of course the 1%, greedy corporations and elected officials have helped fuel this new profit making scam, but bottom line:

WE ARE RESPONSIBLE FOR OUR OWN ACTIONS & BEHAVIORS and your piss poor choices and actions are NOT other people's problems.

Notice, how all the right to shelter states/cities are the WORST at dealing with the homeless and seem to pretty much have no fucking plan at all. I mean how long have people been homeless in this country and you have not figured out shit, especially here in the crap capital of the USA.

Only a complete ignoramus would have thought supporting the Queens Detention Center reopening to take the lion's share of Rikers inmates was never a positive benefit. Koslowitz, who tried to put a lipstick on this pig of a plan (It would bring more people into the community like visitors, guards and those people. And they would want to eat or go to restaurants,” she said. “The economy of the community could be improved. I look at all sides here.) knew all along this was an awful idea, and was just trying to innoculate the district against the scourge of the "temporary" homeless hotels. Now she was betrayed and the truth comes out - she and Crowley and Grodenchik and anyone else who signed that letter of support for the jail in the Queens delegation have no moral compass about standing up for the long-term sustainability of what made and keeps these few communities still redeemable and nice to live in, and they probably can't speak honestly about the deals they're cutting if their lives depended on it.

Yet she ran unopposed last November.

So embrace the suck Kew Gardens, maybe you'll be more "woke" next election cycle. I'm sure she is working diligently on that MTA bridge too.

Closing Rikers will be a HUGE banana for some homeowners.
The city will pay big rent $$ and also legalize your alteration or basement to house an inmate is some "monitored release" program. (even help with costs to brink it to code) Its guaranteed monthly rent money and repairs.
Also guaranteed is swift removal and back to jail if for the inmate who causes problems !

She's all upset about the homeless shelter because her constituents are not happy about it. Karen...and every politician in NYC ...be on notice....When you try to put a shelter in our back yard...ALL HELL is going to break loose. ....The line in the sand has been drawn.

If we're this mad about a tiny homeless shelters opening up and destroying our neighborhoods, imagine how we are going to react with a JAIL.....Be warned.

Jails don't kick all their residents out at 9AM and leave them to wander the streets till 5PM.

There have been a lot of stupid ideas that have come from the DeBlasio administration, but closing Riker's Island has got to be the dumbest. Neighborhood jails??? does this guy just hate homeowners that much? And Koslowitz???? Yeah build a jail, people will come and eat here and visit... she's out of her mind...once again...she sold you out...you're getting a jail or a homeless shelter, my guess is you're getting both

All these poor people in prison and who are homeless need a nice safe place to live. STOP BASHING ON THE NEEDY