Queens delegation looks to throw more money down the drain 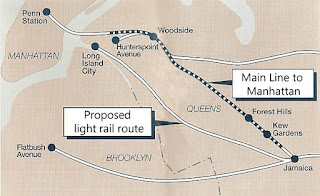 The borough’s City Council delegation, in a letter to the city transportation commissioner, sought funding for a study to run a light rail on a little-used section of Long Island Rail Road track that stretches from Jamaica to Long Island City.

Crowley told the Daily News that a light rail would give Queens residents a reason to leave the car at home and avoid the crowding on the No. 7 and E lines that now carry riders across the borough.

Crowley said a transportation option would cut travel times for commuters and encourage commercial development in her neck of Queens. She said the light rail could be a transit link from eastern Queens to the Cornell Tech campus on Roosevelt Island.

What we've learned here is that Crowley loves developers...and hasn't looked at a railroad map.

There's also this and this.
Posted by Queens Crapper at 6:32 AM

SO STOP THE USELESS DEVELOPMENT YOU FREAKEN A-HOLES!

The fact that this proposed light rail system will cross busy roads at grade where there have already been freight train crashes with cars and trucks proves how foolhardy an idea this is. No fatalities in freight crashes, but a light rail crash could kill quite a number of passengers.

Eastern Queens to Roosevelt Island? Is she serious or smoking something?

Simply opening another corridor for development.

These people in office dont give 2 shits and know you have no out.

I wonder who wrote the letter for her?

Overdevelopment cannot be stopped because developers pay for the election and re-election campaigns of shady inept politicians like Ms. Crowley. It's a vicious circle that only the voters can break by voting wisely. Is your representative owned by the real estate development industry? Mine, Paul Vallone is!

Her cousin, that "other Crowley" must have his finger in this too.

Every liberal hack in the United States loves light rail. The presstitutes will always give it good press. It's a pledge of allegiance to brain dead socialism plus union jobs.

The reality is just run busses

You are 100 % correct Jerry but you are preaching to the choir. Most people are too busy watching the idiot box and living on social media to really care.

They have already found the solution to avoid accidents between trains and vehicles at intersections...install stop signs for the train. Genius!

Read all about it here

Crowley's parents had 15 children and all but one survived childbirth.

Guess who that one was?

They better come up with a solution fast because more people means you'll need to get them around and the existing system can't support it.

BS... if I were in government, I would put money into looking at the inactive part Rockaway Beach Branch and the Triboro RX (with a few adjustments of course to better serve residents) instead of this corny light rail idea. If there's anyway to make this section useful, it's connecting it with Manhattan, like connecting with the Bushwick branch and make a new East River tunnel connecting with the "express" tracks on the Second Avenue station for the F train.

Will make it so much easier for the criminals and thugs to get from Astoria to Forest Hills.

Light rail has a great safety record for passengers. For non occupants, not as much.

2008-2014 1.46 fatalities involving light rail per 100 million light rail passenger miles. A comparable number for driving in 2014 was 1.08. Lower in urban areas, higher in rural areas. Less than 3% of the light rail fatalities were passengers. 22% were suicides.

Do you think the light rail is a scheme to try to get rid of the freight trains for the people who live near the tracks, further congesting streets in Queens with far more trucks to replace them?

"Queens delegation looks to throw more money down the drain"

How about sending the Queens delegation down the drain come election time?

"Do you think the light rail is a scheme to try to get rid of the freight trains for the people who live near the tracks, further congesting streets in Queens with far more trucks to replace them?"

I think Crowley thinks putting light rail on those tracks will prevent more freight trains. She's said as much in the past. This is about her improving the property values of those landowners along the line. She seems to think that converting the M zones to R zones and building low income housing will stop the Cooper ave homeless shelter.

Not too bright, that one.

A never ending supply of tax payer's money on dumb ideas provided by dumb, clueless and corrupt elected officials. You would think that well would run dry.

Is this the same tracks that Assemblyman Goldfetter wants to start running LIRR trains on again?

Also, when they say "light rail" here, do they mean light rail like the LIRR, or lightrail like the trolleys DiBlasio wants to put in Brooklyn?

This line has nothing to do with Goldfeder.

The LIRR is not light rail.

Goldfeder was trying to revive the abandoned Rockaway line for mass transit. Which certainly won't happen now. Be certain to see a nauseating update on the queensway high line in the future here.

All this does is open up more land for development.

I heard the Passarelle is being torn down. This will be the starting point of the new air train to Laguardia????

They are trying to add addition transportation to the area, so a lack of transportation to the area can no longer be used as an argument against the homeless shelter. This isn't Crowley's brainchild. Crowley and Addabbo are all for the shelter in Glendale. Addabbo tried to shame residents into agreeing to a Veterans Shelter. He is selling us out in hopes of keeping a shelter out of his own neighborhood. Crowley has bee in hiding since the whole thing began. She doesn't even live here anymore. Shame on "our" representatives.