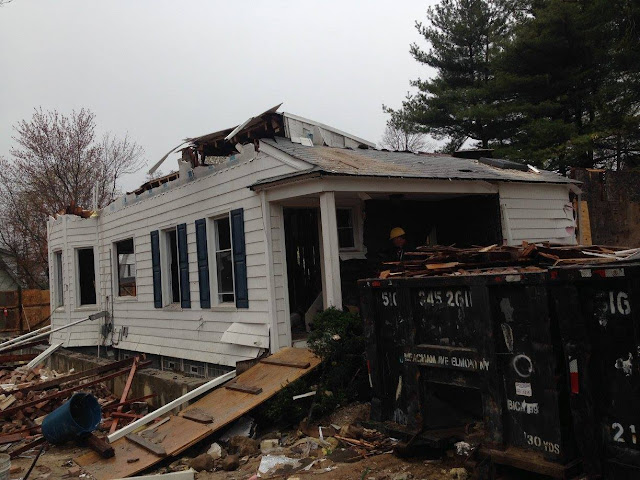 The former home of U.S. District Court Judge Nicholas Garaufis has made headlines in recent months because of backlash over renovations deemed more than excessive by neighborhood residents.

Now, the city Department of Buildings has ordered the owners to file for a new building permit before construction can continue at 218-15 40th Ave.

The original building plans showed that only the front of the house was to be renovated with additional construction.. But neighbors watched in despair back in April as the roof was torn off and the inside gutted, according to Bonnie Skala Kiladitis, who grew up across the street. Eventually the house was reduced to ground level.

Garaufis’ stately house is believed to have been built circa 1890 and was the one of the personal residences of the Lawrence family, influential members of the early Bayside community. A study conducted by historic preservation consultant Paul Graziano found the Lawrence Estate is eligible for the National and State Register of Historic Places, a recognition that carries no protection from demolition or alteration.

A notice to revoke on the building permit was issued to the owners at the end of April, which would force them to answer objections with the DOB for renovating beyond the limits of the alt-1 permit.

A DOB spokesman has since said the owners will be required to file for a new building permit before moving forward with their building plans, and not an alteration permit.

It is not immediately clear whether any fines will be levied against the owner, a recent New Jersey transplant who identified herself by the name Lisa, but a spokesman from Vallone’s office said the councilman is drafting legislation to prevent work on sites that have a “notice to revoke” on building permits to continue while waiting for an answer to objections.

“We are currently drafting a piece of legislation that would make it so a developer/homeowner would not be allowed to continue work during the period between receiving a notice to revoke and answering the objections that warranted that notice. The bill will be introduced in the fall. We felt that receiving a notice to revoke is significant enough to warrant a stop of work. If you are allowed to continue work while awaiting to answer the objections, the notice to revoke is really more like a ‘notice to finish your work as fast as possible.’ Our goal is to give the DOB as many tools as we can to address issues like these when they come up,” the spokesman said.

You generally aren't getting a notice to revoke without first getting a stop work order, so I'm not sure what this proposed legislation would accomplish. The problem is enforcement.
Posted by Queens Crapper at 6:24 AM

DOB can't even stop work on sites with SWO's ...

Whoa. This is NOT an alteration... an asbestos inspection was done, with no action required. A demo obviates that. I am sick and tired of seeing communities exposed to hazardous substances! This is as much an assault as being knifed - and should be prosecuted accordingly. BTW, Engineer Zhao filed, and self-certified, the application on behalf of owner Huang.

Just a paperwork error and misunderstanding...

Damage is done. DOB should pull the license of the contractor and engineer and fined the owner. By pulling license to work in NYC and all other work they have. - I would think contractors and engineers would think twice before pulling this stunt.