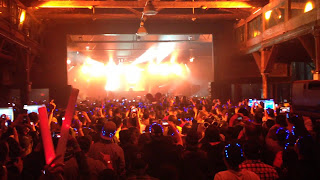 "The gentrification of the East Village explicitly hinged on the aesthetics and ambience that the neighborhood's counter-cultural and bohemian artists had created [during] the 1960s and 1970s," she wrote. "The media's attention to this [movement] gradually changed the popular picture of the neighborhood from low and marginal to central and interesting."

Clubs often perform the same function, she said: "Thriving nightlife has ushered in and even constituted an essential part of the revitalization of neighborhoods." Her research showed that nightlife can "revalorize depressed property and trigger gentrification, enabling landlords and real-estate investors to reap 'monopoly rent.'"

Developers often benefit from the buzz that hip nightclubs generate for down-and-out neighborhoods. But Hae argues that when new, upmarket tenants move in and start complaining, they side against nightlife. This tends to be their outlook on the arts as well. "Municipalities [sponsored] workshops and housing subsidies as an anchor for future real estate capital investment in dilapidated neighborhoods," she explained. "Later [they] removed the subsidies to relocate artists elsewhere once gentrification kicks in."

It's tough to draw a causal relationship between vibrant nightlife and displaced communities. But plenty of real estate players in the last 40 years have tried to harness music scenes as part of their development plans. And plenty of cultural creators are concerned with the role they play in helping gentrification along.

Posted by Queens Crapper at 7:00 AM

Depends what your goal is. If it's to develop for families, "night life" not appreciated. If you are developing for 20-somethings, then it's the primary concern.

Today it's artisan food, craft beers and wines and whiskey, electronic music, laptop djing, & street art. Although the culture today is out of bounds lame and creatively lazy than it was back then. At least there was pop art, movies (Scorcese, Depalma), new wave, punk, rap and disco at their genesis and their primes.

East village was conquered years ago though. You want to see this in it's current blooming or cancerous stage, whichever you prefer (it's clear what I prefer), just go to Rockaway Beach. Since it's happening on the boardwalk, it's like gentrification is being federally funded by our government. Also obviously city funded in that grotesque and poorly attended Gothamist sponsored Beach Bazaar in Riis Park.

The RA piece is an interesting read. "Gentrification is an inherent feature of late-stage capitalism in the US where real estate is one of the only industries left to produce profit.". If this is true Ridgewood and Maspeth will be untouchable in no time. I'm going to buy property in the worst area I can find, sit back and wait to make a killing. Then I can afford to move to a nice neighborhood, oh wait, they are all gone.

It's funny how it works:

- A few starving artist pioneers move into depressed industrial areas
- Intrepid businessmen open up nightclubs in the area
- The area becomes "hot", rich hipsters move in because the area is full of art and nightclubs
- Hipsters drive up the rent so the artists can't afford to live there any more
- After a few years, the hipsters get married, settle down, have kids, become yuppies
- Now that they have families, those same hipsters start calling in noise complaints and agitating for the clubs to be shut down
- Soon the area loses all vibrancy and becomes "normal"
- Hipster/Yuppies get older and grumpier, start posting on websites like Queens Crap about how much they hate new arrivals with their loud music and bohemian lifestyles

It's the circle of life.

The fact that you think that the readership of this blog is ex-hipster yuppies shows how out of touch you are. The majority of people here are native NYers who lived here at a time when everyone else was moving out. Pioneers? Intrepid businessmen? We've always been here, we didn't need to discover anything or ruin other people's neighborhoods.

I am really enjoying "John Ciafone Manor's" comments. It is almost like someone wants to direct the culpability for "JP & Associates, the manifold number of residential properties (dumps all) onto him versus his lovely wife and inlaws. Not buying it.

The organizational structure of Broadway Stages and their side business as slumlords are intertwined. No one has explored the latter. Yet. If/when Preet Bharara gets around to how they have basically bought their way off the "Worst Landlord List" it'll be quite funny I imagine.

It's like SIM CITY now. We have no control. REBNY is literally playing a real life SIM CITY game.

Thanks JQ. I hadn't heard of Ed Garcia. I like the blog. I believe this is the link you were talking about?

If anything shows what sick in their souls mentally ill sociopaths are, everyone that organized, curated and attended that party was. Including Adrian Brody, native of Woodhaven.

I don't know why the author of that article didn't provide the link. But I do know why he focused his story on the two naive hack dj's who became useful idiots for the predator developers, since a bulk of their site is devoted to electronic dance music. In fact, since these 2 meatheads decided to open up a bar by a toxic site with the cities permission in Glendale, they just refuse to learn. And our city's continuing embracing of these party planners and scenes only confirms their complicity in the gentrification industrial complex.

Oh, and another thing. That club they fawned upon, Mirage in goddamn Williamsburgh,Brooklyn, was recently shut down because of crowding, material, fire and various safety violations. These greedy pigfuckers actually used studio props to accommodate bigger crowds.