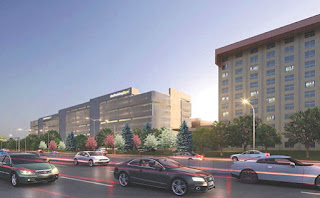 A number of East Elmhurst residents turned out at Community Board 3’s meeting last week to voice their displeasure with a plan to build an eight-story parking garage near LaGuardia Airport.

The Parking Spot wants to demolish the existing parking facilities next to the LaGuardia Marriott hotel at 102-05 Ditmars Boulevard and replace them with a garage that would have more than 1,700 parking spaces.

The plan has gotten some backlash from area residents who fear the project will increase traffic congestion and be a drain on the neighborhood.

Representatives from The Parking Spot came in front of the board in hopes of securing various special permits to help facilitate the project.

The board voted against the approval of the permits.

Before the vote, John Lyons, the senior vice president of development at The Parking Spot, tried to alleviate concerns about traffic congestion, saying the garage would have a relatively modest impact.

He emphasized it would focus largely on long-term parking for travelers flying out of LaGuardia.

I thought we didn't need parking lots anymore because we were all supposed to ride bikes.
Posted by Queens Crapper at 6:13 AM

If its for the airport can't they make an on/off from the GCP? Wouldn't that be easier than having people navigate the local streets?

If the powers that be want it, it WILL be built!!!

This will lead to more noise and air pollution for Queens residents.
It's all about getting more Jets to land and takeoff from a too small airport.

That area is a shit hole anyway. Thet is the way politicians see it.