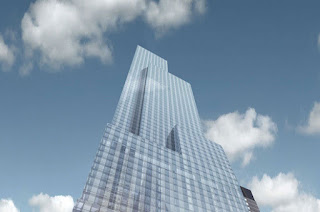 Not since the skyscraper boom of the Jazz Age has New York's skyline undergone a transformation as it is now. More than two dozen supertall towers — and counting — are in some stage of planning or construction, and not just for Billionaire's Row. These slender 800-plus-foot cloudbusters are springing up in the Flatiron, the Financial District, the Far West Side, and even Downtown Brooklyn and Long Island City. How long before they start sprouting in Riverdale or Tottenville?

How about next week?

The rule change is subtle, affecting the formula called floor-area ratio, or F.A.R., that is used to compute the bulk and size of any building. Right now, residential buildings can have an F.A.R. of up to 12: A 5,000-square-foot lot, say, can be occupied by a 60,000-square-foot building, which usually works out (because of space set aside for setbacks, plazas, and so forth) to 20 to 25 stories. Residential buildings’ F.A.R. is capped by state rather than city law, and has been since 1961, when it was not only written into the zoning code but also enacted in Albany to ensure that it would stick.

The bill as introduced in the Assembly and Senate would eliminate that limit, although developers would have to get anything above 12 approved by the Department of City Planning (as well as the City Council, where public outcry might try to limit things again). That could mean a 40- or 50-story building, or even more, on that same 5,000-square-foot lot. (Yes, we already have residential buildings that are far taller, but building those has required special horse-trading moves, like acquiring the rights from several structures and bundling them.) Many neighborhoods have absolute height restrictions set by the city, but some, like Midtown and Downtown Brooklyn, do not. The de Blasio administration argues that by lifting the cap, developers will be willing to introduce public benefits in their projects, like affordable housing, open space, or infrastructure investment.

Some...New Yorkers in Albany do not share that faith. A group of lawmakers, mostly from the city, have risen up in opposition to the legislation in recent days. While the administration remains supportive of the proposal, it now looks like it will have to wait for the F.A.R. caps to be lifted until another legislative session. “Like everything that happens in Albany, this was being done at the last minute, out of nowhere, with no discussion,” State Senator Liz Krueger said. “And big real estate gets exactly what it wants, and the community loses.”
Posted by Queens Crapper at 6:54 AM

Oh, this is to create "affordable housing".

Of course! The son of a bitch is OWNED by the real estate industry. Hmmm....and you all thought that he advocates for the public. This former "public advocate" advocates for the big bucks of REBNY! You know....those are the guys that are destroying your quality of life. But they don't care. Where they live are far from your discomforts and troubles. Nobody shits in their back yard!
DUMP DER WILHELM DER BLASIO! Another term of this phony despot will strip NYC of anything good left that it still has...YOUR NEIGHBORHOODS! Dump our local REBNY STOOGE, Paul,Vallone, while your at it! He bends over for his builder clients, not you!

And, only then will New York City be rich in virtue (as in 'Triumph Of Civic Virtue,' that is---now banished to a Brooklyn graveyard---among the dead!), as well as a surplus of great, elusive revenue!

Hence, it's always: Power to the People---and, NEVER Power to the Party---the two-party- machine-failed system is DOA (along with the American middle class living standards throughout the City and State of New York)!

Oh, this is to create "affordable housing".

My administration also has a bridge in Brooklyn we're trying to sell!!!

He can do squat without your community's electeds.

You are wasting your time if you only talk about him.

Affordable housing, yes. Sociopaths and mentally ill compulsive pathological liars, the lot of them. The only way for the working poor to get decent shelter at a logical price is for these greedhead fucking fucks to grossly and immensely profit off their misery and insecurity.

Shit, why go so far to riverdale when you could start, I don't know, maybe Bayside. As was mentioned the other day here. I would suggest across the street from Blazzies house in goddamn Brooklyn, but since he gave the green light to Ratner to build his wonderland by Atlantic and Flatbush aves, he already made his warped decision who he should devote his civic duties to.

The Devil(opers) Advocate Mayor Big Slow is not the least bit deterred after claiming ignorance in that recent deed overturn/bribe involving the Rivington nursing home and all the rancid patronage sullying the upper ranks of his NYPD. Faust has nothing on this duplicitous and fraudulent 6 feet 5 inch burlap sack of dead dicks.

Like the overseer lobbyist, venture capital firms, foreign phantom billionaires, overpaid celebrity investors and overlord developers that this bill will enhance the wealth and influence of, our mayor is mentally ill and inherently corrupt. These people are as rancid and territorial as that occasional bum that hogs an entire train car with his overpowering dominant stench. This is what and who our economy is relying on along with the rampant tourist industry.

Air and land rights has trumped civil rights. This city is fucked if this

With Duh Blasio's ratings down the toilet, he's strictly a one term mayor.
BEWARE who you vote for next time around!
A good rule of thumb is to VOTE OUT ALL INCUMBENT COUNCIL MEMBERS!
They are the ones that can screw you directly in your own nabes!

In an ideal world, Anonymous, voting out ALL INCUMBENT COUNCIL MEMBERS, as you say, will not change anything!

The hyper-corrupt, entrenched and establishment-rigged party machine-failed system will only endeavor to replace a whole new generation of more of the same fixed sycophants of epic, humanitarian (and ecological) fail! The whole system is rigged to fail New York City's rank and file, as We the People 'PAY' (taxation without representation!), whilst these empowered idiots continue to 'DELAY' (and, DENY--AND, HOPE THAT YOU DIE---where people actually HAVE died waiting for all help-as-illusion that never comes!)!

Not too long ago, I objected to the city council's audacious, 32% pay bump and arrogant power grab (that was NEVER EARNED, much less DESERVED!), that once again ignored public referendum and the will of the taxpayer. At the hearing, there was a majority rule in the audience who objected to ANY raises at all (exactly as I objected in 2009, when Czarina Christine Quinn approved an ungodly pay raise for herself, and the entire city council---despite fervent objections from the standing room only audience at the public hearing), as the city council is already vastly overpaid for part-time work at best (a criminal outrage in and of itself)!

So, what's the point of holding public hearing when the voice of the few (and exalted!), overshadows and nullifies the voice and power of the people?

Alas, this city is not governed by anything remotely representative of democracy--it's government tyranny, anarchy and unjust enrichment--and, the public be eternally duped, bilked, scammed and damned (and the reason for why the city has once again returned to the lawless debauchery and vigilantism of the 1970s--and, under THIS mayoral house of faulty cards--it's only getting worse by the hour)!

On second thought, Anonymous, never mind voting out ALL city council incumbents--ABOLISH this do nothing, know nothing job altogether, and the city will have a surplus of cash that always seems to be in chronic deficit--except for their own self-enrichment, naturally!

Now, I say ABOLISH because the city council is only good at serving ONE person--THEMSELVES! And, given how they will now be able to do MUCH LESS (for their languishing constituency), for SO MUCH MORE (for themselves, rather--as in 32% MORE!), it's abundantly clear that NO SINGLE TAXPAYER will ever miss this bloated and vacuous bureaucracy (and strictly-born-from-patronage positions like these), in the first place!

But, where else can anyone work less (or, in the case of the city council--not at all!), and receive a 32% pay raise--for just showing up!--for a part-time job that was already obscenely overpaid to begin with, at $112,000 a year, before their publicly unauthorized pay raises were FOISTED upon We the People? So, where is any pretense of sacrifice, work ethic and public servitude from these parasitic parvenus, when their subjects don't even make a third of what they earn--and, that's after years of hard work without reward (as opposed to rewarding monstrous fail and political worthlessness)?

Hence, New York City would be SO MUCH better without a city council at all--especially one like these hustling, third-rate, voracious thieves embody, all of whom merely exist to falsely empower themselves---I seriously doubt that anyone would even notice their absence!

Welcome to Mayor Bill de Blasio's Democratic People's Republic of New York. Real estate taxes were raised by an exorbitant 21.7% last year and rent stabilized leases for apartments housing 1,000,000 people got a 0.00% increase. That was zero, nothing, nada; you lose landlord. This is his grand scheme to build affordable housing. Socialism.

New York City has added a million new residents over the last twenty years and is on track to add a million more. All these people need homes to live in. Since all the empty land is gone, the only option is to build up.

Alas, Bill de Blasio is an inferior byproduct of exactly how corrupt, entrenched, establishment-rigged and monstrously self serving the two-party, machine-failed system IS, and always has been!

He's also an indentured servant (ironically, the ONLY public service that is evident from this walking dereliction of public duty---but, nevertheless, actions that are lawless and unwelcome by the mayor's languishing subjects!), of the real estate oligarchy---a counterfeit intellectual and cradle-to-grave sycophant of epic, humanitarian (and ecological) fail!

And, as long as We the People continue to engage in silence and complicity, and not challenge a system that is now FAR WORSE than Tammany Hall and Boss Tweed (more than 100 years ago), then expect more of the same corruption, graft, greed, cover-ups, kickbacks, payoffs and overall societal collapse---and, I don't care if there are 100 Preet Bharara's out there to weed out the crabgrass, when the roots below are still firmly implanted from their breeding point that allows all corruption to propagate once more, in perpetuity!

And, THIS public mess has taken disgrace, dishonor and disloyalty to new heights---he OPENLY lies, cheats and steals, easier than he breathes (and he can do it at will)!