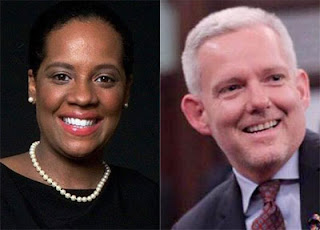 Just two and a half years ago, half a dozen candidates slugged it out to become the next speaker of the city council.

It was a hard-fought race that captivated City Hall in late 2013, but Melissa Mark Viverito emerged as the victor.

Now, a year and a half before the 51 members vote on her successor, the race to replace her is underway behind the scenes.

"Anybody who tells you that they aren't interested in speaker in this very aggressive, passionate council is being disingenuous," Brooklyn City Councilor Robert Cornegy said outside City Hall.

But none of them has declared that he or she is officially seeking the spot.
Posted by Queens Crapper at 6:15 AM

Oh let Jimmy have it so he can get tarred by this admin.

That guy has the depth of compassion that would not drawn a gnat.

Typical of that Queens Library clique.

These parasites are chomping at the bit. Talk about true priorities.

I want JVB to become speaker since he looks pretty.

To quote Hillary Clinton (yet another free walking criminal/sociopath): "What difference does it make?"

They are ALL part of a 'Kleptocratic Plutocracy' (and arrogant power grab!), that STILL serves ONLY themselves, where help is an illusion---and, trust is for SUCKERS! The whole 32% 'pay raises for everyone' body of thieves is corrupt (as everyone else continues to pay the price)!

All of them are complete morons. There's no hope left for this city.

Congressional rep, Assembly rep, City Council rep, local/neighborhood rep, why do we need all of these levels of representation?

Combine them all into one job and have all of the current seat holders/mouth breathers fight to the death to see who gets the single 10 year term!

It's not whether you've got brains or are a moron, it is which developers you bend over for.
Councilman Jimmy is the perfect REBNY candidate for speaker. He will get the real estate industry's job done.

Get your lip gloss ready, candidates.
Blow the right REBNY backers and you'll come into your own.

JULISSA HASN'T DONE MUCH TO ADDRESS THE OVERCROWDING IN SCHOOLS, PETTY CRIMES, AND DRUG ACTIVITY IN CORONA, SO WHY SHOULD I GIVE TWO CENTS ABOUT HER WANTING TO BE THE NEXT SPEAKER?? DONT GET ME STARTED ON BREMER,HE'S ANOTHER ARROGANT MORON !!!

and JVB's pocket's will be lined even more -

Not a fan of Julissa, but what do you really expect her to do about those problems? The Council is not that powerful.

Abolish the council and bring back a modified version of the board of estimate.you must hacve a degree in economics or an accountant .

THE PROBLEM IS HIS SELL OUT TO DEVELOPERS WITH THE 'BOROUGH OF QUEENS.' YOU WILL PAY FOR THE ELKS CLUB OUR FRIEND, WE WILL MAKE SURE THAT DONNYBROOK FOLLOWS YOU EVERYWHERE.

JVB does everything for queens. Just does nothing for Queens.

Quexit! Let's make sure we never have another deBlasio, Dinkins or Beame Again!

Quexit, indeed, Anonymous! But, the hyper-corrupt, entrenched two-party machine system that has dominated Queens County (and all of NYC and NYS, really!), will never address their corruption, graft and greed when they themselves greatly benefit from all forms of it, instead of earning an honest day's paycheck that enforces meaningful public service (not political privilege and self-enrichment), like we have right now---with no end in sight!

If ever a Quexit was needed---it's right here and right now, without further delay!

How come none of the good Councilpeople are in the running? It's mostly a list of the most self-serving and corrupt folks there.

Won't it be wonderful when we have Melinda Katz as mayor instead of DiBlasio?