The fund-raising scandal surrounding Mayor de Blasio is so toxic that he hasn’t been able to sell out his birthday bash at a tiny venue, even with comedian Louis C.K. headlining.

City First Lady Chirlane McCray on Sunday — the mayor’s 55th birthday — sent out an e-mail blast urging supporters to snap up tickets to the Thursday-evening event at Brooklyn Bowl, a Williamsburg bowling alley and concert venue that holds up to 600 people.

“Remember to get your tickets now if you haven’t yet — news that Louis C.K. will be there has traveled fast and space is filling up,” McCray wrote.

The e-mail came a week and a half after the de Blasio campaign announced that the comic — who had no trouble selling out three shows at Madison Square Garden — would be introducing Hizzoner at the event to benefit his anticipated 2017 re-election bid.

Tickets cost $100 to $250, according to an invitation form on the ActBlue Web site for Democratic fund-raising efforts.

One Democratic activist said McCray’s e-mail pitch was “like the infomercial: ‘Hurry up while supplies last.’”

“I don’t know anyone who is going,” the source said. 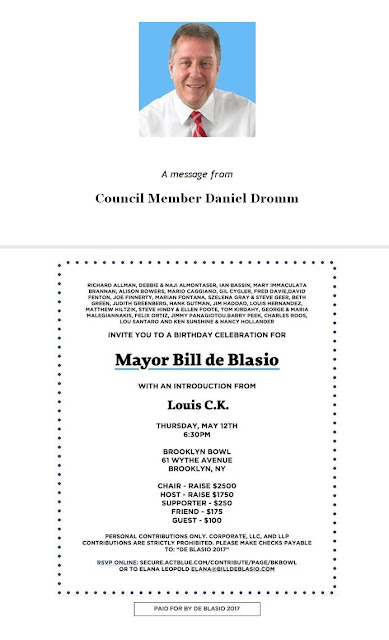 Posted by Queens Crapper at 6:31 AM

Anonymous 1: that would make a good bumper sticker.

I hope Dromm is using his own money for this. It seems a lot to pay only to watch two turds pat each other on the back.. I suppose BDB's asshole buddy JVB is going as well?

Mrs.Wilhelm is just getting back from a taxpayer funded jaunt to DC which certainly included an entourage and now she is soliciting for a pointless campaign fundraiser. The Nerve indeed

Mostly, I am disappointed in Louis CK, this guy is supposed to be the common sense comic and a moralist and he is being an MC for a toxic delusional asshole. For a while, a lot of his act was goofing on hipshit verbal affectations and lifestyles. This explains why he hasn't done that in a while. Say it ain't so louie.

Now we know what Chirlane's job is, and why she needs a staff.

de Blasio 2017. Is that the number of days he'll get sentenced to?

No doubt Team Van Bramer will be there too with all his other 'progressive' city council pals.

Alas, whenever I think of these two counterfeit intellectuals, both of whom so completely dishonor and disgrace City Hall, with impunity (as they keep showing all city residents every day how they don't have the vaguest idea what it is to provide honest, ethical, INCLUSIONARY, NOT FOR SALE, leadership [that leads by example]), I always take a backward glance to the wisdom of Voltaire (more than 200 years ago), when he said: "Those who can make you believe absurdities, can make you commit atrocities."

This intensely incompetent, mayoral impostor (and his equally frightful entourage of epic, humanitarian fail), have continually betrayed all pretense of public trust and integrity, that they now DEVALUE all honesty itself---to pathologically treasonous, traitorous and ruinous effect!

Hence, We The People demand impeachment proceedings to begin right now---already delayed-and-delinquent by more than a year---as, the public continues to be eternally duped, bilked, scammed and damned (and it's openly practiced, without consequence, just like the rest of the entirely false, fake and failed City Council)!

Give them away to Sharpton. He'll sell them to his cronies, for his cut. That will fill up the hall.

One day I woke up and said to myself,why pull the wagon so I voted demacrat and I've been riding on top since,I might be the only white guy riding and that's ok,the other passengers think I own it.

Louis CK a "moralist," JQ? He defended Woody Allen after Dylan Farrow called him out on his sexual abuse of her as a child. Disgusting.

Additionally, "Louie From the Village" has defended DiBlasio on air, but never confirmed by Louis CK that it was him. http://nymag.com/daily/intelligencer/2015/08/man-who-sounds-like-louis-ck-defends-mayor.html

Daniel Dreck, is more like it. Such a destructive piece of excrement for the people of NYC. Who on earth keeps voting this garbage in?

Don't worry,I remember that "imposter" call too. I don't forget anything, as well as I don't forgive. Having seen his act and various videos, this see/hear no evil jester role is just out of character with the material he's been doing the last decade, especially the irreverent material. And doing this in the hipshit capital of the world in the most bullshit concert venue in the borough (Is it a recreation area for bowling or a clandestine concert hall?, and will there be bowling during the ceremonies?) is just downright heartbreaking. At least I still have my George Carlin and Bill Hicks cds.

Louie must have and enjoys his unlimited film permits.