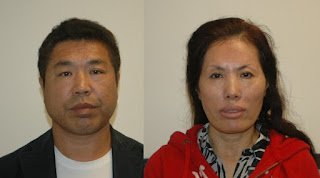 A couple from Queens and massage parlor manager have pleaded guilty in a “cross-county sex trafficking ring” after two women were forced to perform lewd acts on customers for several months, the Nassau County District Attorney said Friday.

Zhaowei Yin 49, and his wife Shuwen Ai, 47, of Flushing, pleaded guilty on Friday to two counts of sex trafficking, a felony, and two counts of promoting prostitution in the second degree.

Parlor manager Li Fei Leng, a 33-year-old also from Flushing, pleaded guilty to the same charges Tuesday.
Posted by Queens Crapper at 7:02 AM

Doesn't surprise me one bit!

Not a happy ending. For them.

No surprise. Keep up the enforcement NYPD. If you need help get the feds involved. They're better at it!!

How about checking out bordello Row on 164th Street between Crocheron and Depot Road?
Robert Hanophy, current president of the Broadway Flushing Homeowners' Association and assistant district attorney to Richard Brown , ain't doing shit! Not to worry, his term is up. Score nothing for Bobby boy during his term as president of BFHA, except, perhaps, kissing Vallone's behind. Bobby wants a judgeship just like daddy. Uh, so does Vallone.

Chinese! Why am I not surprised?
Maybe IRS should be looking into all of this whore house unreported income.
They gotta be able to do a better job than the crooked 109th PCT.

Those korean girls are so so beautiful. Sigh.

So this took place in West Hempstead and Franklin Square. Amazing that this is not happening in Flushing.

Tip of the iceberg!!!

The missing question- are Ozzie & Harriet legal themselves?

It's legal where they come from and they don't know our laws,I see the charges being dropped and the judge apologizing

Boy does she (Shuwen Ai) look mean and nasty. Like she will wack the shyte out of any of her whores that defy her.

One couple down, hundreds to go.

All the feds have to do is go to back pages of the Queens Tribune.

What on earth does everybody think all those massage parlors are really about? In Astoria, by Ditmars, we have 5 in a 7 block range. When I brought up the fact that they're prostitution rings to our local rep, I got no response. They should raid them all and lock up the owners, the prostitutes and their clients too.

"couple hundreds to go"
More like a couple thousand !! This shits going on all th eway down Northern Blvd Woodside to Great Neck. It's become a tsunami with no end in sight!!

Legal or not legal as long as nobody's getting murdered it appears this Mayor & police commissioner dont give a shit about rub joints or prostitution.

Feds & immigration currently under Obamas thumbscrews wont do shit.
Obama will NEVER allow a fellow America hating progressive scumbag like the NYC Mayor to be embarrassed or allow anything that shows immigrants or "his people" in negative luminosity.
Pray voters wake up and Trump gets 2017 or this country, its people & heritage will be paved over and erased from existence forever.

But they don't understand the language.

As the president says, these two are not criminals, the are “justice-involved individuals.”

This minor incident will be plea bargained down to misdemeanor assault, and these two entrepreneurs will be released for time served...

The word 'Spa' is a dead giveaway. Might as well have a burning bright red light hanging outside their door.

Care to bet how many 'spas' in the Flushing/Bayside area are housing houses of ill repute? I'd venture about 90%

Where have the NYPD, FBI, politicians, and the Queens DA been all of these years? Surely they knew this was going on!

I rather sickos go there and get some,than go around preying on women and children

You guys crack me up. Love the Panda Foot Spa. Looks like she's got botox or something in her lips. Decriminalize it already. but then, no Christmas presents in May, June, July, etc. Sorry mr. do nothing politician, sorry community affairs getting his photo in the Queens Tribune officer.

Good thing this ugly lady just runs the place. I wouldn't want to f--k her with somebody else's dick.

Create a red light district in LIC. Then you will finally get tourism in Queens.
Sex tourism works in other countries. A fly 'n fuck plan can be offered by travel agents at a discount.

She looks like she's been around the block too many times. Ugghh....vommit!

To borrow a title from the Rolling Stones album, "Goat's Head Soup".