It was that easy 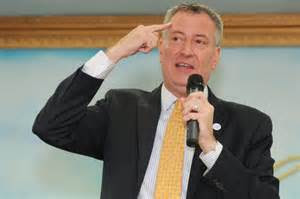 Two former advisers to Mayor Bill de Blasio who left City Hall for a political consulting firm were granted permission to continue working with the mayor on behalf of his nonprofit, which is now under federal investigation, despite a one-year ban on doing so, DNAinfo New York has learned.

They received a June 10, 2015, Conflict of Interests Board waiver to work for the Campaign for One New York, de Blasio's nonprofit focused on promoting his political agenda, before the city's one-year prohibition expired.

Good government groups and political experts say the arrangement shows how easily paid consultants and advisers move in and out of de Blasio's City Hall.
Posted by Queens Crapper at 11:36 PM

Labels: Bill DeBlasio, campaign for one new york, conflict of interest, consultants, not for profit

I look at this picture of dumblasio and the first thing that came to my mind was the scarecrow from the "Wizard of Oz". If he only had a brain!

Alas, don't insult the scarecrow from 'The Wizard Of Oz,' Anonymous! At least that idyllic childhood character was wholly aware that HE didn't HAVE A BRAIN---so unlike Mayor 'Big Slow, Tall & Stupid,' who can suspend all cognitive function at will---and, this while in purported possession of a brain (albeit one that was already 'used' by 'Abby Normal' of 'Young Frankenstein' fame)!

Hurry up, Preet, and wrap things up in Albany, to finally prosecute the rapid vermin that was not 'caught-and-trapped' by you on your FIRST, upstate tour of civic duty. Sadly and tragically, BOTH City Hall and Queens Borough Hall have got so many 'CRIMES WITHOUT CRIMINALS' inmates running freely about the asylum, that soon it will be a case of full blown anarchy itself (currently in mid-level progress)!

And, if ever there was an urgently needed, work of art (and constant reminder, in the form of a statue to keep vigil over all 'OPENLY PRACTICED,' New York City corruption, graft and greed), then it would RIGHT NOW, by way of an immediate 'Rush Job,' Express Delivery from Green-Wood Cemetery, to properly REINSTALL the maddeningly evicted 'Triumph Of Civic Virtue' statue (and return it to a working fountain base---not a planted ruin that no one ever said that it wanted---much less was ever asked!), that a deranged, depraved and madwoman likw Helen Marshall ordered to be ripped from the Kew Gardens skyline, on December 15, 2012---without resistance, much less consequence---and, the public be damned!

Now, another fiscally mad monarch-dictator, Melinda Katz, has filled the role of 'Marshall's Certified Madness,' as she has just FOISTED a $720,000, publicly unauthorized hatchet job on to We The People, and Civic Virtue's re-purposed fountain base (ostensibly to beautify a plaza that her predecessor intentionally blighted---for nearly four years---at a cost that is ten times what it would have been to simply clean, conserve and preserve the statue, on site)!

And, if this unconscionable madness doesn't wake up all Queens County residents into activism, protest, rally and resistance---then, I don't know what it will ever take---as anarchy and Neo-Fascism prevail---to pathologically treasonous, traitorous and ruinous effect!

Watched American Greed last night,Detroit Mayor Kwame Kilpatrick set up a non profit and did the same thing,he got 28 years
DaBlasio must have gotten his idea from Sharpton,all the clergy in Detroit were in on it.