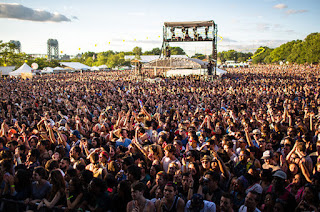 Organizers of the Governors Ball are planning a two-day concert outside Citi Field in October, the Daily News has learned.

But the inaugural Meadows Music Festival could cause major headaches in Flushing Meadows Corona Park with the popular World Maker Faire taking place nearby at the New York Hall of Science at the same time.

Both events are scheduled for the weekend of Oct. 1-2. The festival, which would feature an eclectic mix of music and food, would take place in the parking lot of Citi Field.

The annual Maker Faire, which drew more than 85,000 people two years ago, takes place in the Hall of Science parking lot. But drivers are usually shuttled over from the Citi Field lot.
Posted by Queens Crapper at 7:02 AM

Planning and NYC just doesn't go together. Scheming maybe but not planning.

This is becoming more common around the city-- too many simultaneous uncoordinated events. One agency not talking to the other. Result is a mass mess than no one enjoys.

Logic and logistics don't exist in the minds of these incompetents'

A few weeks ago there was this foodie bullshit festival and people couldn't even get off the train platform.

It's nice to see that Democrat Party shill, Jim Lisa, publisher of the Queens Times, tearing his hair out again about this. Lisa publishes in Corona Heights - a stone's throw from FMCP - and he was recently pissed-off about the crowds and parking nightmare in his nabe when the recent International Food fest made life unbearable in CH.

Put out a suicide watch for Lisa when this new event rolls around. Yeah Jimbo, vote Democratic.

And, if by "Yeah Jimbo, vote Democratic" you mean vote for BERNIE SANDERS or BUST, georgetheatheist, then right on. Never empower any and all false prophets within the hyper-corrupt, entrenched, establishment-rigged, party machine, crime family rings of epic fail.

And, a better way to go is to become INDEPENDENT altogether---and, for our citizenry to stop rewarding monstrous failure (ironically, a systematic party failure that is against the total self interests of the hardworking, seldom rewarded, rank-and-file)!

Because, in case anyone hasn't noticed, there is a crisis in all honest, ethical, INCLUSIONARY, NOT FOR SALE leadership (that leads by example), and it's a GLOBAL CRISIS that extends far beyond the 'junkyard backyard' of all corrupt, dishonest, dishonorable, disloyal, disgraced-and-derelict, Queens County pols---all of whom consider 'lunch and a manicure' a stressful day's work (and, now paid 32% MORE to continue offering 100% LESS!), compliments of your daily 'flush' of Queens Crapper tax dollars!

WHOOOOOOOOOOOOOSH---and, around and around the money goes, before disappearing altogether (like our Monarch Melinda's $720,000 publicly unauthorized 'Planted Ruin' that now stands in place of an empowering statue like 'Civic Virtue,' triumphing over all corruption and vice (that has been ironically banished to a Brooklyn graveyard, among the dead!), that SHE HERSELF is the SOURCE of CREATION!

You just can't make up Queens Crap like this, fellow patriots---where every day there is an even bigger load coming from 'Melinda's Throne' at Borough Hall, is literally backing up all Queens toilets with a vengeance and impunity that is unprecedented, to date---and, only getting worse by the hour!

There is plenty of planning going on. You could not do more to plan a riot than these buffoons have done. Think of this as Queens version of the notorious Carribean Day blood bath that plagues Brooklyn every year.
Let's bring tourism to Queens and the riot squad too.

Of all the times to schedule this, why opposite Maker Faire? They only way they could have timed it worse would be planning it opposite the US Open.

Central Park is the spoiled child of this city. Like the rich kids of instagram it gets all the presents...

Is this the event where lobbyist Harold Ickes gave a bag of cash to dumBlasio and is his client got a permit the next day.

Sorry can't keep up with all the corruption.

Nailed it. I was thinking of this later in the day. True news probably has it somewhere.

The modus operandi with these insatiable power hungry and power mad lowlifes is to commit as many offenses and crimes, provided and enabled by massive loopholes and outrageous technical legalese (citizens united decision), that people will lose track and interest (This was mastered with grotesque aplomb by the Bush/Cheney administration). Even the local news media, which do not even make the effort to even thoroughly report anymore. Since all they show is viral videos, the latest (cr)app and the weather. All the fucking time with the weather.

Melinda Katz and city did the right thing doing their homework, talking to professionals and the BIG BONANZA locking those mobbed up gorilla scumbags AEG and MSG out.
It will be fine. They are using local techs and backline crews,
--good quality "music" bands and no hip hop nasty gangsa shit. NYSP should be all lit up, fireworks, food, even talk of Belgian waffles and a special headliner.
Best happening since 1964 in my opinion people need to relax!

The front of house sound arrays will be aimed out toward the bay with nothing to reflect it. Meaning no residential areas will even hear it.
We do these out in Martha Clara vineyards riverhead with the same crews, professional sound and guests like Nile Rodgers, Sheryl Crow . Never any problems, no complaints.

The front of house sound arrays will be aimed out toward the bay with nothing to reflect it. Meaning no residential areas will even hear it.
We do these out in Martha Clara vineyards riverhead with the same crews, professional sound and guests like Nile Rodgers, Sheryl Crow . Never any problems, no complaints.

Unequal comparison. The distance from the north shore of Long Island to Connecticut is more than five miles. Crossing the East River at Flushing Bay to the Bronx is less than one. The din will carry well into the Bronx. And just because the speakers are pointed Northwards doesn't mean that they can't/won't be heard in the opposite direction.

Assholes with sound permits always feel that they can be as loud as they want and be exempt from having any regard to the neighbors in the surrounding areas.

It's all about the bass...no thank you!

Dumb Blasio? The voters were the dummies!

"Flushing Bay to the Bronx is less than one"

Is this the new math Diblasio is pushing ?
More like 3 miles. The end of the LGA runway is over 1.2 mile line of sight from City Field. If audible at all in the Hunts Point industrial areas + 2 more miles, Bronx, City Island the LGA jets taking off and noise from the 95 corridor is WAY louder. Not to mention the weekend Ceder Beach & Rye Playland fireworks.

Some people in College Point may hear but again all the weekend fiesta's and Jets still drown it.

This is a riot about to happen. People, especially drunk of ANY race can be territorial and it only takes a nudge for shit to get lit. They will be calling this day Black October.

It's like the city is planning, and is there any doubt because our actual city planners are oblivious fucking morons, for the destruction of the park. As if the recent report on the desperation for funding for the upkeep is going to rely on corporate advertising isn't foreboding enough, but it will be pleasantly convenient for unscrupulous event promoters and lobbyist lowlifes and false liberals like Harold Ickes

more dumb-shit planning by this city. such a joke.

First of all, and I was just at FMCP again last month for the opening day,
even, of the Ramones Exhibit at the Museum, and somehow got lucky and got there
early, and snagged one of the last parking spots, no idea how, but thousands
of people showed up and it was a bit of a logistical nightmare later on. It was great to see such a turnout, but on the other hand, the museum clearly had little
understanding of what kind of crowd might be expected that day, and it showed. Luckily the opening day was peaceful.

But, the point is, there's never been adequate parking at FMCP, and they've never made any efforts to expand it. Meanwhile now it costs $25 or more to park at Citifield for game days, or even other events, I believe. So that's no use for basic museum or park-going. As for the noise, who knows? Outdoor shows are outdoor shows and it depends on the bands, sound systems involved, power, and location.
Also, the FMCP area and museum area have hosted some outdoor shows the past fewer
summers, and I hadn't heard any complaints about THOSE, although they weren't
2 day festivals drawing thousands, and they weren't high-volume shows I don't
think. But I skipped one of them that Hollis Brown the band was playing,
since the parking there is so horrendous I just gave up attempting to attend,
and I really wanted to do so.

Why don't they just host the damn concert IN Citifield, as they often do anyway for various big shows, like Paul McCartney or Billy Joel, and be done with it? And at least it has adequate parking for such huge crowds. As for the type of festival and type of audience that could be another tale entirely. I hardly ever go over to FMCP lately, since the parking is just godawful and I'm in Nassau north shore so I'm not taking the LIRR to subway which is a waste of utter time and money for me.
NYC has always been a silly place, and always will be. End of story. NYC is
just not made for festivals like this. Even LI has more decent venues for smaller
music festivals especially out east, and usually they go off just fine. But
then there's other nonsense like the $300 a ticket shows each year out in
Westhampton Beach or whatever it is. Most normal humans aren't A. trekking out
there for that or B. spending that money for one smaller outdoor show, not
even a festival!

AEG and all its daughter companies and ticket distributor(so all can pretend no to be a mobbed up monopoly) have competitors locked out of Citi Field. Paul McCartney and Billy Joel are AEG booked bands. AEG and the IATSE thuggs have no house contract with the parking lot and local IATSE thuggs. It's all racketeer dirtyness. Local-union Crews can work in the parking lot and ticket prices can be a quarter of what AEG would charge.