Get ready to be pissed on more 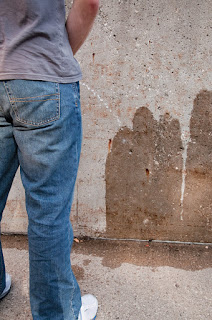 In January, the City Council voted to reclassify low-level crimes such as public urination, public consumption of alcohol, littering, subway fare evasion and taking up multiple seats on the subway from criminal to civil offenses.

But if California is any indication, it may not have been a smart move.

Retail giants with locations in the Golden State, including Safeway, Target, Rite Aid and CVS pharmacies, say they have seen at least a 15 percent increase in shoplifting since California voters opted to reduce theft penalties in 2014, The Associated Press reports. Shoplifting reports in LA increased 25 percent in the year after Proposition 47 passed.
Posted by Queens Crapper at 7:51 AM

I wonder how far we are from the full-out legality of pulling your pants down and dropping a turd in the middle of the sidewalk at Rockefeller Center, when you feel like it? Some idiot can't be far from testing this, right? Duhblaz will support this, right?

NYC is dirtier and smellier than ever. The biggest stink is coming from City Hall.

If they saw a 15% increase in the smell of piss I would see the connection.

Are they linking pissing in public and shoplifting?

For the record I am against smelling piss all day AND against shoplifting.

There should be something amended to make repeat offenders than have stiffer penalties like jail time. If LA allows shoplifting with only a fine, they will just steal more expensive items to cover the cost of the fines. SMH

California voted in Property 47,it was ment to lower felonies to misdemeanor so the jails could unload lots of criminals into the street
Property 47 makes any crime under 950 dollars a desk appearance ticket
Crime in California has Exploded

Alas, the entire five boroughs of New York City have been flooded with bright yellow, stinking political piss, as all corrupt politicians themselves have aimed their collective streams at WE The People---AND, WE LET THEM!

It's time to start returning fire-and-aim (EN MASS!), fellow languishing constituents---and, POSSE UP! THIS IS CLASS WARFARE---and, WE'VE BEEN LOSING TO THE ENTRENCHED, POLITICAL SCOURGES OF EPIC FAIL FOR MORE THAN 50 YEARS!

REVOLUTION is the ONLY SOLUTION---and, it's NOT NEGOTIABLE!

As the president says, these are not criminals, they are “justice-involved individuals.”

The problem in California isn't the reclassification, but the cops ignoring the crimes. I can't imagine NYC cops NOT giving out tickets for offenses.

Anon #1, that is hilarious!!! Sad, but true! You can tell by the stench that people are defecating in public (I've recently seen a pile on a subway staircase). People have to be witnessing this a lot. Unfortunately, how do you punish folks when they're not caught by police? I would think #2 definitely carries a penalty, even if urine doesn't anymore.

You can tell by the stench that people are defecating in public (I've recently seen a pile on a subway staircase). People have to be witnessing this a lot.

Since like a billion people in the world already practice public defecation in third world countries like Africa and India, NYC cannot be far behind.

I live in California and the results of Prop 47 (which OF COURSE I voted against) is that tickets are issued for "low level offenses" such as public urination and robbery.

The two are connected.

There can't be anyone stupid enough to think that crooks pay their tickets, except for progressives.

The President thinks that Ted Bundy was deeply involved in women's health issues.

Let Progressives run things-all you get is a lot of shit.

Richard Irritation, you said: "It's time to start returning fire-and-aim (EN MASS!), fellow languishing constituents---and, POSSE UP! THIS IS CLASS WARFARE---and, WE'VE BEEN LOSING TO THE ENTRENCHED, POLITICAL SCOURGES OF EPIC FAIL FOR MORE THAN 50 YEARS!"

I have heard you rail against the political situation for many years now. It is time for you to pony up and run for office so we can get rid of all the flotsam and jetsam. You are perhaps the only one on Queens Crap who understands how to upend the current political situation.

I'm not sure how much it would cost to get on the ballot, who would have to back you or nominate you, or the manner in which it is effected but you probably know how to do that.

Let us know and when and if you intend to become a candidate and I know all of us here who have read your column will support you in every way possible.

Paint some targets on the sidewalks. Let's have a real pissing contest!

Could this be the equivalent of letting off the banksters from all the damage and swindling that crashed and almost destroyed the world economy with fines that they can easily replenish in a month?

To Anonymous: I HAVE already made a run for city council (and, did not take matching funds from the city, no less!), but, the tainted powers that be held a second coronation for their demigod, Joseph Addabbo, Jr., in 2003 (and my opponent, Michael Massa, never ran for anything again thereafter---making it his third political loss).

The system is afraid of me, Anonymous---because, I would put my own life on the line to clean up Queens County's terminal, raw sewage plant of greed, graft, privilege, power, private splendor and unjust enrichment---versus, public squalor, beggary, obscurity and quiet desperation for everyone else (and, it's been this way for more than 40 staggering years)!

Last time, I raised my own funds (approximately $150,000), without the help of matching funds---most impressive, I thought for a first time try! The next time, should I ever throw my unblemished 'hat' into the ring, I wouldn't know what to expect, frankly, what with increasingly low voter turnout, and worse, the citizens who actually BOTHER to vote, spend as much time researching their candidate as they would spend looking at cemetery plots (or heaven forfend, vote according to a candidate's personal looks, youth, appearance and faux charisma, instead of what truly matters: character, integrity, principle---and, honest, ethical, INCLUSIONARY, NOT FOR SALE leadership, that leads by example).

And, the final reason for why a majority of urgently needed voters' stay home on the most important day of the election process (Primary Day), is because right now there is a crisis in all honest, ethical, INCLUSIONARY, NOT FOR SALE leadership (that leads by example)---and, it's a GLOBAL CRISIS!

turn up the speakers
Piss on the Wall

Progressivism is the belief you can pick up dog shit from the clean end.

Richard, I can't believe you failed at politics. You're the perfect blowhard for the job. Why say something in 10 words, when you can scream it in 300?

The country is going downhill fast. Be armed or be Harmed!