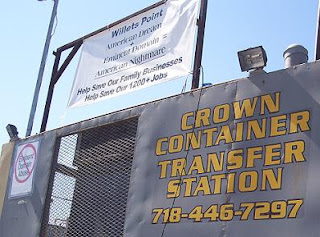 A business-led solution to address illegal dumping and garbage on Flushing streets was canned by the NYC Department of Sanitation on Monday.

Crown Container, a private contractor for commercial garbage pick up, announced on Friday that they would remove trash from a pedestrian triangle at the intersection of 37th Avenue and Prince Street, where illegal dumping is common.

But on Monday, the company was told they had to pack up the five industrial-strength garbage receptacles they had placed on the triangle, or face fines and violations.

Crown had volunteered to empty the bins once a day free of charge, in the hopes that those who were dumping would use the receptacles and therefore keep the area neater.

They had specifically ordered the bins, which cost upwards of $600, from Wisconsin.

But Sanitation believes private containers on public property were against the rules and probably a bad idea.

(It's more likely that they are planning to give a contract to one of de Blasio's donors to remove the trash.)
Posted by Queens Crapper at 12:46 AM

(It's more likely that they are planning to give a contract to one of de Blasio's donors to remove the trash.)


yes, because certain people, who are just thrilled to be involved in a delusionary and illusory cynical progressive agenda, have to profit over mundane activities like throwing trash in a can.

How much longer do us native new yorkers have to wait for indictments.

With all of the hundreds of businesses up in Flushing, including a BID and TWO Chambers of Commerce , how is it that a private carter has to step in and foot the bill to keep that area clean? What are the BID and Chambers doing???

We have worked with Jerry Antonacci of Crown Container since the 1990s on several Flushing beautification weekends, which were sponsored by the Coalition For a Planned Flushing Inc. Crown always volunteered their services FREE OF CHARGE.
Kudos to Crown!

Filthy Flushing deserves it's fitting title. Peter Koo doesn't say "Boo" about it. CB7 either doesn't give a crap, or has given up. Stavisky prefers dirty Albany politics and a dirty downtown Flushing hub. Grace Meng has "federal" matters on her mind. Parking her butt in DC is a nice comfy lifetime job. Besides, neither she or KOO live in the garbage mound called Flushing.

Why do we have to be known city wide for our unsanitary streets and nostril searing summer stench? I have put in over 30 years trying to work to make Flushing a better place FOR ALL! Now I've come to the conclusion that it is what it is and am extremely content to live two miles east of the dirt and overcrowded streets.

Wisking by on the LIRR each day , I can gaze down at the festering hell that political corruption has created below the Main Street tracks.

Peter Koo wants the MTA to clean up around the Main Street LIRR station? He must be daft. The residents and businesses created it. Sweep it clean and in an hour they will submerge it in trash again. Uncivilized is uncivilized.

And never mind criticizing my opinion. I stand by my words and the proof of their truth lies in the greasy streets and garbage dumps. Who wants to bring tourism to Flushing? Never happen!

Speaking of the old Coalition For A Planned Flushing....they wanted to do a free trash pickup but we're confronted with the NYC sanitation Union which put the kaybash on it.

Tommy Huang started the whole mess by buying off the local politicians. Now the practice has been continued by those who stepped into his shoes.

For all the noise the local pols might be making about the dirt, funny how nobody can do anything about it. So here comes a good guy, Crown Waste, and they get ripped a new asshole. No good deed goes unpunished.

Get the fuck off your corrupt asses, Koo, CB 7, etc. and get your hands dirty!

Jerry Rotondi is spot on. We have a garbage problem in this city,not because of the size of it (though illegal conversions are a culprit),but because we have so many disgusting slob people, many from third world countries who bring their filthy habits here and corrupt and useless over paid elected officials like Peter Koo who have helped to create this type of environment by doing nothing. We have litter laws on the book, but they are rarely enforced by the city.

Nobody gives a fuck anymore.

I admit it's a difficult task converting slobs into sanitary people,
but are you all proud of Flushing's garbage blight and stench?

It looks like a task force is necessary to deal with this on a REAL level.
But DO NOT look to me to volunteer. Been there. Done that, since 1986!
It all fell on deaf ears due tto the rampant political corruption which still exists today.
With all of you high sounding organizations in existing, how come the town is an embarrassment?

My visitors keep on asking me, "What the hell is going on down on Main Street?
Phew! Disgusting"!

The flushing chamber, one flushing and koo are all on the correct side here.

And someone actually works for two of the chambers ( or whatever you want to call them) and collects two paychecks! Can anyone guess who?

Is this a trick question? Do you mean chamber pot???

They are all on the correct side here?
Then how come Flushing still stinks?
They are all getting paid to be on what you call the correct side. That is supposed to be their job, to improve Flushing.
How successful have they been viewing the evident mounds of garbage and stench?
Judge for yourself. I have. And try signing your name, anonymous. I am proud to stand behind mine and post it openly!
"Anonymous" is the coward's retreat.

Another P.S.
Put up some cameras. Catch the slobs who are responsible for the dumping.
Fine them severly!

Who collects two pay checks? That one is easy. It's John Choe...former COS to former councilman John Liu...who is a shady cousin of the infamous criminal developer Tommy Huang.

Imagine John Choe, a communist sympathizer running a capitalist org like the Flushing Chamber. That's a good one!
And WTF does One Flushing do besides spend money to paint decorative propaganda murals by the railroad tracks.
Pearls before swine. BTW, the westbound LIRR staircase is another stinking garbage dump.

Yeah...the Flooshing Chamber Pot of Commerce.
Let the Chinese business organizations force their slobby countrymen to clean up their act....
If that is possible. For a culture that is known for corruption, law breaking and unsanitary habits,
that is a Herculean task.

Since Julia Harrison left office , Flooshing went down hill at an accelerated rate.
She was branded by the crooked county political organization as "anti Asian" because she told the truth and might endanger the kickbacks these politicians were getting from Asian contributors to leave them alone.

The dirty streets are related to the dirty politics of Flooshing.
In China, it always toofk an emperor or a commie chairman to keep its corrupt people in line.
Only the threats of punishment for law breakers keeps them relatively honest.

Before the Taiwanese-Chinese arrived in Flushing, it's streets were clean. Now we have a real blight instead of the fictitious 1970s blight manufactured by political and real estate spin doctors. There was no blight back then, only some retiring businessmen closing their long time shops. But, Dem pols used the fear of Blacks taking over Flushing to allow Asians to get away with anything.
The Chinese were given carte Blanche because they kept the Blacks out. So now we have real blight!
Welcome to Flooshing, a microcosm of the ills of the third world!

An alternate name for Flooshing...Frushing...for frustrating!

Craziest thing is that real estate in Flushing continues to skyrocket like the rest of Queens, in fact the borough is only behind Manhattan and Brooklyn as the most expensive place to buy a home in America. So expensive that you would get a better deal in Honolulu Hawaii, San Francisco, California and San Diego, California than you would in Queens not to mention the quality of life, the weather, the views, and most likely the people in those places are probably a lot friendlier.