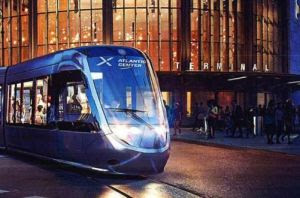 What would happen if your city, in the name of progress, started giving poorer residents vouchers for landline telephones rather than smartphones? Or if, rather than stocking public libraries with computers, so that people could write emails, your city installed fax machines? You would consider these unnecessary expenditures on outdated technologies. Yet when it comes to public transit, many cities splurge on modes designed for a different time and place—namely light rail.

Rail transit, such as streetcars, widely spurred America’s urban growth during the industrial era, when automobiles hadn’t yet been invented, and settlement patterns were dense. There are still a handful of dense legacy cities—New York City, San Francisco, Boston, Chicago and Washington, DC—that wouldn’t function without passenger rail. But rail isn’t convenient or practical in sprawling cities, although many have built entire systems nonetheless.

These projects have been championed by everyone from environmentalists, to urban density proponents, to business groups like the Chamber of Commerce, and for numerous reasons. Rail, it is thought, will get people out of cars and into transit; will spur infill growth; and will bring a “sense of place” to strategic corridors.

But it doesn’t seem to do any of this, a conclusion drawn by numerous analysts, most notably Randal O’Toole. For decades, he has written in books, blogs, and as a Cato Institute analyst about the fool’s errands of cities trying to reorient themselves around rail. They spend billions on building and maintaining systems, only to find that their cities largely function as they had before, via car use and fragmented development patterns.

Rail transit’s role as a catalyst for dense development is also highly questionable—some lines have seen little development go up around them, and experienced high vacancy rates in existing buildings. Others have enjoyed adjacent mid- and high-rise growth. But it’s hard to know, in the latter case, whether it was rail that spurred those developments, or some combination of government subsidies for developers, organic migration back into cities, land use deregulation to allow higher densities, or the construction of other nearby public amenities.
Posted by Queens Crapper at 6:43 AM

I don't know Crappy. Queens was chock full of streetcars. Most of our borough and Eastern Queens especially, developed around them (Holliswood, the ENTIRE No Blvd Corridor, etc). Most of the heaviest used bus lines operate along the old streetcar lines anyway - so replacing an existing heavily used bus line with a street-car could work.

Additionally, streetcars failed because they were the victim of a General Motors / Firestone / Standard Oil conspiracy not because of something inherent in the transportation mode.

Just because things and people are old doesn't mean they are not valuable or useful. Heck the car is now over 100 years old and hyperloop is the newest fangled thing ever. Should we stop making cars, roads, parking lots because hyperloop is around the corner? Thats silly, and so is rejecting street cars because they are old technology.

All that being said, the mayor's proposal is problematic but not for the reasons your quote outlines.

Where the mayor's proposal fails is:
1. it takes a speculative route - no one knows what the ridership will be here - rolls this expensive infrastructure through flood prone areas
2. doesn't connect to a major employment center
3. lastly and most importantly, light-rail only works with a dedicated street space or right-of-way. The mayor's proposal does not include this. Without this, the streetcar will be just as pokey as the bus.

Forget trolley cars I have a great new idea, let's all use a horse and buggy.

Buses replaced streetcars because they are more flexible in their routes. If a street is closed due to construction or an accident, etc, a bus can and will make a detour. Buses today are also a lot lower in emissions today than they were when they first replaced the trolley.

What good is light rail to convey heavy traffic caused by overdevelopment without regard for inadequate transit and decaying infrastructure?
Light rail....heavy traffic...no solution. An oxymoron suggested by morons. This is solely to benefit the developers who find it difficult selling luxury condos in the middle of a transportation desert to hipster would be buyers.

we should ask Dizzy Lizzy, she's an expert on trains & trolleys

It seems the a cheaper solution would be to get rid of street parking on all streets with bus routes and replace the parking lane with bus lanes. My biggest issue with the buses is they get stuck in traffic and behind people that double park.


I would much prefer more subway tunnels to be dug.

Jerry is right. It's all about enriching cronies.

"Buses replaced streetcars because they are more flexible in their routes. If a street is closed due to construction or an accident, etc, a bus can and will make a detour."

Tell that to the Q47 when it leaves 74th Street Jackson Heights heading to the airport and has to go all the way down Broadway to 61st Street in Woodside to make detour. Pretty flexible if you ask me!

Riding multi billion dollar tunnels is not the answer. Neither is very expensive and dangerous modern trolley systems. The answer is dedicated bus lanes and rigid enforcement against blocking the bus lanes by double parking. And what I mean by ridgid enforcement is mandatory seizing of cars and cabs that double park to pick up or drop off passengers. Finally, if we are going to encourage and allow extreme density development we need to just about eliminate all passenger vehicle parking so that these modern hate the automobile assholes that want to live in these new dense pack areas will be prevented from owning cars. This way there is reasonable passage of police, fire, ambulance, delivery and service vehicles. Because folks the way we are doing this now is a disaster and is rapidly becoming unworkable.

The first word should have been "building". I feel like such a shit head. Sometimes.

of course the jam packed 7 needs another tunnel, there is no direct route to greenpoint

how about a new train connecting greenpoint sunnyside south, maspeth middle village use the old long island city LIRR tracks that dont seem to be used much outside of weekday rush hours

lots of people some industrial job areas....its there....

I'm increasingly thinking that there is no space at street level, and it's risky to build tracks or tunnels due to flood risk. I'd like to see them bring back the old elevated lines, but let's see how the MTA handles the rebuild of the elevated M train tracks.

Dedicated, rigidly enforced lanes for electric buses powered by overhead catenary might be an option, that's what they're moving to in Boston and San Francisco.

NYC transit already has 4 different sets of rolling stock. the trains, (the old irt, ind and bmt) all used different size of trains, some are wider, some are taller, some cars are shorter. they can not be interchanged. then in an act of stupidity, the "train to the plane" was designed to use a mono rail.. and another set of rolling stock.

Each piece of equipment requires different tools, and different training. and repairs are done at different "shops" so out of service trains need to be moved more.. and this proposal suggest yet another set of rolling stock--yet more equipment, more tools, more training, and another place to service--

For this reason alone it is a bad idea.

As Duhblaz's legal problems multiply, expect more of this diversionary bullshit to be pushed even harder. Ferrys. Governors Island bullshit. Street car bullshit, etc. It's only going to step up in noise.