When you pack people into neighborhoods, this is what happens 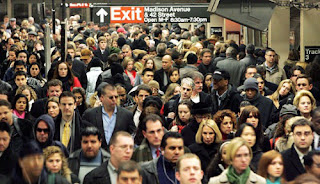 The Lexington Avenue line is the most crowded in the system, but subway riders across New York City are finding themselves on platforms and trains that are beyond crowded. L train stations in Brooklyn are routinely overwhelmed. In Queens, No. 7 train riders regularly endure packed conditions.

Subway use, now at nearly 1.8 billion rides a year, has not been this high since 1948, when the fare was a nickel and the Dodgers were still almost a decade away from leaving Brooklyn. Today, train delays are rising, and even a hiccup like a sick passenger or a signal malfunction can inundate stations with passengers.

Delays caused by overcrowding have quadrupled since 2012 to more than 20,000 each month, according to the Metropolitan Transportation Authority.

Subway ridership in New York is in the midst of a resurgence almost unimaginable in the 1970s and ’80s, when the system was defined by graffiti and crime. Ridership has steadily risen to nearly six million daily riders today from about four million in the 1990s.

But the subway infrastructure has not kept pace, and that has left the system with a litany of needs, many of them essential to maintaining current service or accommodating the increased ridership. The authority’s board recently approved $14.2 billion for the subway as part of a $29.5 billion, five-year capital spending plan.

On the busiest lines, like the 7, L and Q, officials say the agency is already running as many trains as it can during the morning rush. Crowds are appearing on nights and weekends, too, and the authority is adding more trains at those times.
Posted by Queens Crapper at 6:04 AM

Crappie please re-post this when election season comes around next year. The morons who do no research and elect horrible councilmembers and mayors who thrive on packing people into neighborhoods must be taken down.

Avella is the ONLY elected who actively fights for quality of life, the rest are in the pockets of the construction industry.

Hmm No mention of the MTA'S Board of incompetence, the shady budgets, the two sets of books? What!

"Driving" the LIE westbound in the a.m. is a misnomer. It's like a continuous parking operation. Average speed in the morning is 5-10 mph. And these morons think we need MORE people packed in here, MORE people on roads never imagined to carry that much traffic. Insanity! It is a major assault on any possibility of quality of life here.

And mayor dumblasio thinks that building more housing will actually help? Maybe he should have thought about actually building better and more public infrastructures (like schools) and expanding the subways BEFORE he decided to build more housing! Also, deportation would help the city out right about now. If we deported like we should be then 80 percent of the riders on the 7 train wouldn't even exist!

Makes sense, as far as REBNY is concerned, overbuild and let the infrastructure rot.
Who cares? These developers live in the posh burbs somewhere.
They do not take public transportation.

The guy who runs the straphangers group, or whatever it's called, was on the news blaming Cuomo for underfunding the MTA. He made not one mention of real estate and hyper development. What a joke.

How was it handled then?

and another thing.........ridership was this high in 1948. Now people use the subway 24x7. I bet that there were much less night use of he subway hen. That means that 1948 rush hours were much more crowded than current rush hours. How was it handled then? Maybe people were smaller than now?

Now folks - our problems are solved - Mr Van Bramer, advocate of living on brown fields and next to train yards (previously the abode of society's margins), has suggested CITY COUNCIL take over the MTA.

Management would be MORE PROFESSIONAL he reasons.

Our problems solved. Think of that the next time you act silly when he or one of his cohorts walks into a room.

BAD PLANNING, LACK OF VISION, AND EXECUTION ARE TO BLAME!!
THIS CITY HAS ALWAYS BEEN GROWING IN POPULATION. THAT WAS KNOWN THEN, AND IT IS STILL TRUE TODAY. DONT KNOW WHY DIDN'T PLAN THINGS BETTER IN THE EARLY DAYS OF THE SYSTEM TO DEAL WITH THE HUGE GROWTH IN POPULATION THAT WAS TO COME...

There are TOO MANY 'EFFIN PEOPLE in Queens - send them home please! There is a major white flight happening in North Flushing now. Goodbye to the old neighborhood - it's turning into a shithole!

A street car system is probably the answer here.

First they punish us for our carbon footprint and demand on resources like food,roads,schools,housing and health care THEN THEY FLOOD THE CITY'S WITH DEPENDENT CLASS VOTERS TO ENSURE THEY NEVER LOSE AN ELECTION AND CREATE A ONE PARTY SYSTEM
Al Gores said during the 2000 election that all he needed to win was 13 states,those 13 states had the highest welfare in the country and he lost
Because of his Arogance
Hillary will buy every vote with your EBT tax dollars and by DAMMING YOU FOR WHITE PRIVILEGE,YOU ARE THE ENEMY AND YOU MUST BE DESTROYED

"That means that 1948 rush hours were much more crowded than current rush hours. How was it handled then?"... People were civilized in '48, not like the animals we have now. Also the people who could find work after the war bought cars and moved to the 'burbs'.

"it's turning into a shithole!" Yes with our help voting shit into elected office election after election...

Where DumBlasio lives, Park Slope, never gets overdeveloped.
Build the shit elswhere. When it comes to where I live...NIMBY!

Now that Puerto Rico has defaulted on its Government bonds the exodus has begun,up to 1 million welfare recipients are expected to arrive by election day,half going to Florida and the rest are Bronx Bound,because PR bankrupted the island will not be able to make welfare payroll as written in PRs constitution so in order to keep payments coming Islanders must get to US Mainland,think your screwed now just wait,you ain't seen nothing yet,
Press one for spanish,Happy Cinco de Mayo,Gringo,now GIVE ME MY MONEY.

One way flights Out of Puerto Rico booked solid for the next 6 months.

conomic exodus means two-thirds of Puerto Ricans may soon live in ...
www.theguardian.com › World › Puerto Rico
The Guardian
Jul 2, 2015 - A pedestrian walks through a street in Old San Juan as Puerto Rico's economy continues to go downhill. Photograph: Joe Raedle/Getty Images.
Puerto Rico's Economy, Crime to Blame for Exodus | Al Jazeera America
america.aljazeera.com/.../puerto-rico-economy-crime-to-blame...
Al Jazeera
Jul 28, 2015 - Puerto Rico's economy, crime to blame for middle class exodus .... officials and investors since debt crisis began, Puerto Rico urges patience.
Puerto Ricans leave in record numbers for mainland U.S. | Pew ...
www.pewresearch.org/.../puerto-ricans-leave-in-rec...
Pew Research Center
Oct 14, 2015 - Last year, 84000 people left Puerto Rico for the U.S. mainland, a 38% increase from 2010. ... loss since at least 2005, a year before its recession began. ... increased use of English in the school systems has fueled the exodus.
Puerto Rico's population swap: The middle class for millionaires - BBC ...
www.bbc.com/news/magazine-32344131
BBC
May 5, 2015 - Puerto Rico's struggling economy has led to an exodus of young people moving to the US mainland - while wealthy Americans are starting to ...
[PDF]The Causes and Consequences of Puerto Rico's Declining Population
https://www.newyorkfed.org/.../ci20-...
Federal Reserve Bank of New York
by JR Abel - ‎Related articles
Alongside the many economic challenges currently facing Puerto Rico is ... The exodus—which .... To begin, we examine the components of net migration:.
Economy and Crime Spur New Puerto Rican Exodus - The New York ...
www.nytimes.com/.../economy-and-crime-spur-ne...
The New York Times
Feb 8, 2014 - Puerto Rico's extended woes, including high unemployment and ... said that after he began to wade deeply into the island's economic and ...
Puerto Rico's terrible economy is causing a population exodus - Jun ...
money.cnn.com/2015/06/15/news/.../puerto-rico-debt/
CNNMoney
Jun 15, 2015 - It's gotten to the point where the migration is beginning to rival the record numbers of Puerto Ricans who arrived in New York in the 1950s -- the ...
Puerto Ricans flee island's economic mess for U.S. - USA Today
www.usatoday.com/story/.../puerto-ricans.../31301859/
USA Today
Aug 25, 2015 - Tale of three cities: Influx of Puerto Ricans is not coming to New York or ... With those numbers rising, fueled by the latest exodus, here is how the ... has spiked in recent months as the government began defaulting on its loans.
Puerto Rico debt crisis drives exodus to U.S. | PBS NewsHour
www.pbs.org/newshour/bb/puerto-rico-debt-crisis-drives-exodus-u-s/
PBS
Aug 13, 2015 - Puerto Rico debt crisis drives exodus to U.S. .... leaving for the U.S., accelerating a population decline that began with the recession in 2006.
Economic hardships in Puerto Rico spur a mass exodus to the U.S. ...
www.miamiherald.com/news/nation.../article26622070.htm...
Miami Herald
Jul 6, 2015 - As Puerto Rico struggles to fend of bankruptcy, many residents have ... the company has packed for Orlando since the beginning of the year.
Searches related to puerto rico exodus begins
puerto rican population 2015
puerto rico immigration requirements
puerto rico population 2016
what state has the most puerto ricans
puerto rican population in the world
puerto rico population decline
population of san juan puerto rico
puerto rico population 2014

Yes, in 1948 people were more polite. Also thinner, so much so it might actually be a factor in crowding.

Also less whiney, with no blogs.

8000 Cuban "migrants"have been held in Panamanian camps,unable to fly north to Mexico ,enroute to the U.S border, recently. the migrants have now been released to be air lifted north. BY WHO'S orders and funding ?Speak Spanish your in America now(Diverse Queens Cnty )
compare 60 yrs of Cuban Communism Vs> 60 yrs of S.Korean CAPITALISM.

my wife read in a Norwegian paper that the wild fires in Canada forced the evacuation of thousands of Syrian/Middle Eastern refugees that WERE RECENTLY SETTLED THERE BY THE COMMUNIST P.M.

And don't forget that we not only have Puerto Rico as a problem but now cuba can be a problem too. As soon as a Cuban sets foot on us land, they are automatically a citizen but now that we opened up the door to cuba, they will also be coming into the usa by the boatloads I'm sure.

There are two million more people in NYC now and the article states that there are just as many rides being taken now in a year as in 1948? Impossible.

>Now people use the subway 24x7. I bet that there were much less night use of he subway hen.

Actually, there was probably more, as there was no TV or internet to keep people home at nights.

I was told by my grandparents that before WWII, being out all night was even more common.