DeBlasio: "Nothing to see here" 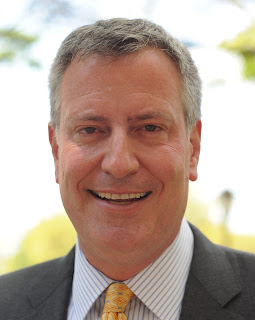 Critics accuse Mayor de Blasio of setting up a shadow government — comprised of consultants who are not paid by City Hall, but pocket cash from clients, many of whom have business before the city.

The arrangement has long drawn complaints but it is generating a new wave of condemnation, because City Hall is refusing to release emails the consultants exchanged with the mayor and his top aides.

"It's disappointing to see the mayor, whose whole persona in government is about doing it for the people and being transparent about it, and to be relying on a legal analysis from some lawyer about whether this consultant's communications are protected is ridiculous," said Dick Dadey with good government group, Citizens Union. "Just disclose."

More than a year ago, NY1 made an open-records request for emails between a top de Blasio consultant, Jonathan Rosen, and the Mayor and high-ranking administration officials.

The request was denied, even though emails between city officials and people outside government are presumed to be public. In a letter to NY1, a city lawyer referred to Rosen as a consultant to the Mayoralty. He argued the emails were protected by the same exemption that keeps us from seeing many of the e-mails the mayor sends to his City Hall staff only.
Posted by Queens Crapper at 7:08 AM

Looks like deblasio is taking a cue from his mafia homeboys back in Italy.

What else is new? All the Reds turn out the same.

Check it out: Nomenklatura.

All he is doing is what all the other pols do - what is the big surprise?

"Nothing to see here," says this 'Tall, Slow, Big & Stupid,' pathological, treasonous, traitorous SCOURGE of epic, humanitarian fail (and a waste of skin, depleting the earth of precious oxygen)---he was talking about his entirely disgraced administration at City Hall---himself included!

And, the public be eternally duped, bilked, scammed and damned! When is ACTUAL democracy and POWER going to be returned to We The People ('Of The People, By The People And For The People)???

This is what government tyranny looks like (not to mention Neo-Feudalism, Neo-Fascism and Neo-Bolshevism), and all of City Hall, Albany (and BEYOND!), SO completely betrays public trust and integrity---that they now DEVALUE all honesty itself---to pathologically treasonous, traitorous and ruinous effect!

Alas, he is SO entrenched in a level of corruption that now surpassess Boss Tweed's Tammany Hall (not to mention hoe intensely incompetent a lethally dangerous he is), that he is now beginning to make a voracious, low level, hustling predator like Anthony Weiner actually look credible for future candidacy---and, that would be the LAST thing that I could have ever imagined myself to say publicly (much less admit privately)!

Please, Preet---wipe the floor with this Godless creature, and quintessential fraud---he's making a total mockery of city government transparency and accountability, and completely destroying all pretense of public trust and integrity in the process! BANISH HIM to ETERNAL OBSCURITY!

Hey, just like the Co-Op/Condo Property Manager shake up of the early '90's.
"Your salary is minimal, but go ahead and shake down the vendors that service the properties you manage."

SO CALLED 'PROGRESSIVES' LIKE DIBLASSIO ARE FULL OF POOP!!

Alas, Anonymous, the mayor is a lot of things---but, progressive is not one of them. And, yes, he is certainly 'full of poop,' as you say---but, it's a lot more serious than that. He and his entire administration DEVALUES all honesty itself, to pathologically treasonous, traitorous and ruinous effect---and, the public be damned!

Worse, when elected public servants willfully betray the oath of public office whom they swore to uphold---it creates a hostile, civic environment that perpetuates ALL civic lawlessness, vigilantism and leaving our city and state residents to their own devices---always a blueprint for a level of epic disaster that we have already seen repeatedly, with each new cabal of public office fail.

And, when there is no pretense of honesty, accountability and transparency at the top---then there is full blown anarchy within the middle and bottom levels of socioeconomic rejection (currently in mid-level progress)!


Actually there is something very very wrong here.

The mayor hasn't been convicted just yet so stop bullying him just because he's guilty.

This is bs. Emails sent to the mayor are presumed to be public under state law. The emails should be released with exempt parts redacted, if any.

You are all wasting time here unless you go after all to them.

Replacing one bum does little.

Now we have three new york's..........remember this guy learned from the most corrupt,the clinton's.

Please say that again, but this time in English.

How is a regulation like that legal? How is it not a gross violation of First Amendment rights? How did anyone in the city even think that passed a basic common sense test?

Don't they realize that a lot of people - especially transgender people - get more offended being constantly asked their preferred pronouns, as it implies they don't pass?

No more she/ it.......now combined into shit,just like this city.

We always used 'heshe' in my neighborhood.