Learning a lesson from Brooklyn 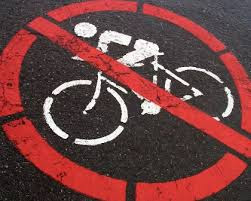 The Department of Transportation has tabled a controversial proposal to add a two-way protected bike lane to Clinton Avenue following fierce backlash from longtime residents uneasy about mounting change in the neighborhood.

At the request of the DOT, Community Board 2’s Transportation and Public Safety Committee removed the proposal from the agenda of a Thursday night meeting — a continuation of Tuesday’s meeting held to accommodate a lengthy list of speakers from the public.

The committee did not vote on the proposal, which would turn Clinton Avenue, now a two-way street, into a one-way northbound street, with one travel lane, two parking lanes, a pedestrian island and the bike lane.

But the withdrawal didn't stop residents from airing out their frustrations — often yelling and booing at the DOT as representatives tried to answer questions.

Several residents faulted the DOT for not consulting community members before drafting the proposal.

The DOT said Thursday it would go back to the drawing board and continue to gather input from local community groups in drafting a revised proposal before returning to the community board next month.

Communities that hold the government accountable by showing up to complain and have no problem voting the bums out get listened to. Meanwhile, Queens Blvd gets bike lanes that the community didn't ask for because everyone here is too busy posing for photos with worthless pols and fighting over a couple of hundred dollars of discretionary funding.
Posted by Queens Crapper at 5:59 AM

Bike lanes are pretty to look at, it's like I'm in Paris or something. Even better, they're always empty! It's like a little park running alongside.

What percentage of our population rides bicycles? I'd bet it's less than 2%. For that 2% the lives of literally millions of people have been turned inside out to accomodate a vocal minority. Start saying NO, a loud resounding NO, to the bike nazis. Bike lanes give a false sense of security to the riders. Let the electeds know who the majority of voters are, stop being silent about it. Just say NO, to the Bicyclists, and to the politicians who think some hipsters riding bicycles are going to keep them in office. KICK the creeps out. VOTE NO, with NO compromises

Let the electeds know who the majority of voters are, stop being silent about it. Just say NO, to the Bicyclists

Anybody who rides their bike more than 10 miles each way to Manhattan under such treacherous conditions has to be nuts! In Amsterdam, the average bike commute is 3 miles each way.

How many have been unsure which restroom to use???

I am an avid bicyclist. I don't need any bike lane to ride. Well figure out how me, the cyclist and the motorist, can both get to where we're going without us getting into an accident. Either way I'm going where I need to via my bike regardless of a bike lane.

Some car drivers just don't want to share the roads. Bike lanes change car driver's habits and make them more aware that the road is not just for cars.

As usual, Queens misses the issue here by a mile.

The issue is not those silly bike lanes - but the complete inability of people to work together in this borough which is the main reason that Queens is falling behind the other boroughs.

We have grown so dependent on the politicians that they completely control every detail of public life in this borough.

The petty sniping with each other is easily exploited by them.

We are so downtrodden that any effort that meets the slightest resistance is immediately abandoned.

All forms of local information, from the borough weeklies to the increasingly intrusive Queens Library has a message carefully vetted by the power interests.

Blogs like this is a rare beam of life into the borough, but even here the message is tainted by the widely racist comments placed by political hacks that quite successfully drive the public away from this public democratic forum.

Now that is said, you all can go back to your comfort level and talk about bike lanes and the like. Hopefully the webmasters of this blog can start to center more of this blog around the themes discussed in this post.

I want to see the bastards doing this crap to Queens howl.

Lets take away significant roadway space for 2% of the bikers to use. Except if its raining. Or snowing. Or too hot. Or too cold. Or if its 'too far'.

Then those same riders will use their cars or subways/buses that they said they didnt need if they had bike lanes.

My favorites are the ones who insist that a bike is wonderful, then take it on the subway because they really only want to ride it for the last two blocks of their commutes.

What can be done about the damn bike lanes? I wouldn't oppose them so much if they weren't taking away so much parking - 88 spots in Elmhurst and that number is going to be much greater in Forest Hills where there are many small shops that people drive up to, park at the meters and go about their day. All day long, the area where the bike lane will be put, is full with cars parked at the meters. Where will they go? They will either stop coming here since it's such a nuisance, hurting local business; or they will continue circling around and around looking for parking on our already clogged streets - creating more chaos. DeBlaz has to go - can't stand anything about him; right down to that mentally challenged looking long face of gloom - we need to impeach!!

There is no need to go over and over the same grumbling again and again, people. We get it about bike lines.

Its about time we start to work together - those bike lanes are the least of our problems - most which seems to have the same root cause - our political system stinks.

I mean, really, why are we talking about restrooms when bridges are falling down. Why are we dumping millions of dollars into brownfield floodplains when the rest of Queens is falling apart and under funded?

This morning, as with other mornings,The newly painted bike lane on the boulevard of death, sorry LIFE, remains deserted.

Everyone should learn from the citizenry of Brooklyn and they should be commended. Because they know they are slowly being replaced, with these seemingly innocuous improvements for safety and environmental reasons. Just an environment for Generation Gentrification, which clearly doesn't include the aged.

The people who came out to the community board in Queens to listen to the condescension and get berated by the worms at transportation alternatives and some random hipshit bikers got their status in their own neighborhoods as zero thanks to our corrupt fat ass mayor.

Some car drivers just don't want to share the roads. Bike lanes change car driver's habits and make them more aware that the road is not just for cars.

Maybe.
Some bike riders think that they own the road also.
Goes both ways you know.

So let me get this right, fuel tax, registration is what car owners pay to use the roads.
What exactly are the bikers paying?
Why the extra lanes and privileges when they paid exactly zero dollars for the use of roads?
This is nothing more than more Agenda 21 bullshit.
How convenient as the roads, infrastructure deteriorates the powers to be start pushing this bike nonsense.
In Europe the bike shit works, but what are the distances?
Actually one would have to be crazy to drive on the narrow, congested streets in some of the European cities. Their public transportation is also better.
Talk about delusions.

I guess we all should be riding bikes to work like in North Korea or China.

Well, a lot of people do commute by bike, if you believe Streetsblog:

Except for one thing: this is NYC, and 42,000 is not a lot. As another anon correctly guessed, this is less than 2% - I believe daily subway ridership is on the order of 5 *million*. Not going to bother looking up car share of commuters but going to guess it's way more than 42,000, but way less than the subway share.

So the solution seems obvious: bring back elevated lines in the outer boroughs and get commuters off the streets altogether. You can even have parking under them like the IRT viaduct in Sunnyside!

I've driven my truck down 2nd Ave from the 90s(street) to the 59th many a time with bikes to the left of me bikes, to the right of me, citibike a-holes squeezing between cars, trucks, buses. WTF!!! Why don't they use their precious bike lanes!!!

"So let me get this right, fuel tax, registration is what car owners pay to use the roads.
What exactly are the bikers paying?"
Hey did you ever think that some of "Us" bike riders own cars too. I own three bikes and there are four cars (fuel tax, registration...) in my family household.

Once again the City does not care what the citizens want, the bike lanes are just to get people out of their cars. This is all to being done so more people can be crammed into an already overcrowded city. Surface transportation is in constant gridlock and trains are packed and falling apart. Real improvements to transportation take years and billions of dollars to accomplish. No one will admit the City is full and development needs to be curtailed because that would evoke the wrath of the all knowing and powerful developers who own every NYC politician. Seems that the people who live in NYC will have to adjust to living in hamster cages and get their exercise while peddling to work.

Always wonder how car drivers think the road is for cars only. With no bike lane a bicyclist has the same right to the lane as a car driver does.