"On Sept.30th there was a presentation by DEP in Flushing Meadow Park on their long term control plans for CSO's in Flushing Bay and Creek.Mainly the plan is to construct bioswales along city streets to capture water before it hits the sewers and also to create surfaces that absorb water in areas like school yards and green roofs.They also talked about treating sewage with chlorine before discharging it into the bay and creek.

In the room was a small crowd of about 30 concerned citizens,some environmental activists and people from the Dragon boat teams.Just about everyone in the audience were skeptical of the plans and didn't think it would be sufficient because of the building boom that will be coming along the creek in Flushing and Willets Point. Some were alarmed of the idea of all the chlorine entering the ecosystem and it's effect on wildlife. One elderly man who lived his whole life in Flushing told how yards are being paved over for parking and apartment houses green spaces have been turned to concrete and there seems to be a lack of concern by the city to prevent it.

It was ironic that the meeting was held in a building that was built in the park over what was to be the largest underground tank in the world and at a similar DEP meeting not that many years ago we were told that it would be the answer to prevent sewage from entering the bay and creek.

Can NYC ever get a handle on all it's infrastructures issues if the population keeps increasing and this is especially a concern in Flushing.Just seems like bad city planning to me." - Rich

Take a look at the upcoming dredging meeting taking place: 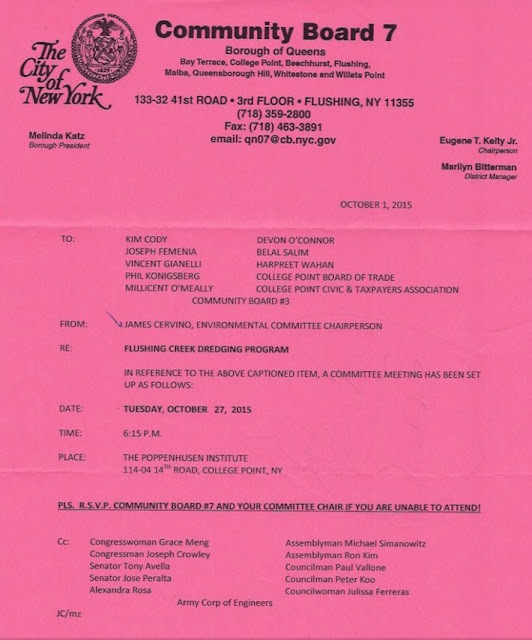 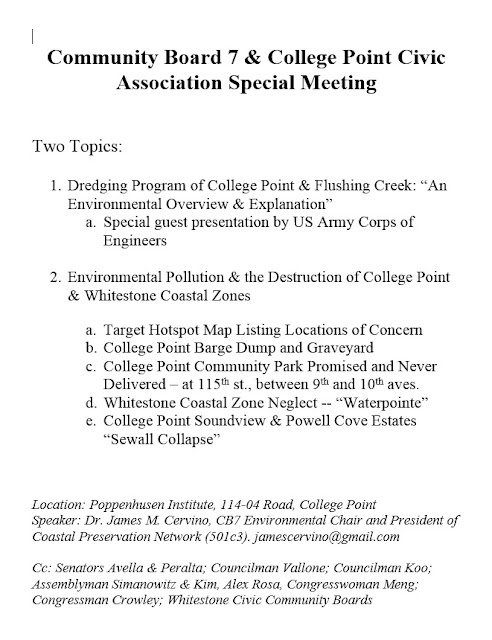 bioswales along city streets to capture water before it hits the sewers and also to create surfaces that absorb water in areas like school yards and green roofs.

Grea, pave over back and front yards and take away public space to compensate. All we need is a place to absorb standing water in a school yard. Now that's healthy.

Holding the meeting at Poppenhusen guarantees a small attendance, as it is not easily accessible.

Chlorine, as in chlorine gas, is deadly!

I'd rather have Flushing Creek stink like the organic toilet it is, than to take a chance polluting it with manufactured chemicals to quickly address a problem that was created by poor planning and over development.

Please take note that CB7 stood by for decades permitting all of this poorly planned development.
They always hid behind that phrase, "As of right" to absolve them from their criminal, yes I call it CRIMINAL, role as accomplices in this over development.

Now we try to quick fix the long term fiasco by placing a bandaid on a serious wound.
Lots of luck, you wimpy asvisory, legislative body.
You were part of the problem. You will certainly be no part of any reasonable solution.
But, by all means, go through the motions to convince residents that you are doing your job to the fullest.

I just returned from a quiet weekend on Shelter Island. What a shock to come back to the Flushing sump!
Thank heaven that I live on a hilltop in Broadway, far enough away from the stink and corruption.
I used to live in downtown Flushing but got out before the invasive over development.

Overpaving green areas along with traffic congestion, overcrowded schools, insufficient housing and a host of other ills have the same cause, overpopulation. This unspoken fact does not fit into the developers money making plans so it will never be addressed by the politicians or bureaucracy of NYC. The hell with what the residents desires, the builders want more money.

Tell the Flooshing Chinese to stop surreptitiously dumping their crap down street manholes at night.
Are all of the restaurants using grease traps like they are required?
Sanitation is not a high priority in China. Why should it be in Flushing?

REBNY, and it's community board stooges are behind the population over saturation and over development.
Tear down one house and replace it with a towering multiple family building and you've added more asses to more toilet bowls.
Where do you think all of that shit is going to wind up?
Duh! Right in the lowest points in the water system. How many millions of dollars were spent on that giant retention (poop tank) to take care of treating the effluent? It might have been adequate then but with the frenzied rate of development that followed it is antiquated now.

We must not offend Flusning's Chinese.
They kept the Jamaica Blacks and Elmhurst Corona's Latinos out of Flushing. And, besides, they support the campaign coffers of the local electeds. They have bought their representatives.
They community board is in cahoots with them too.
Weren't Chen and Bitterman tight?

Poppenhusen is definitely an out of the way place to hold this meeting.
You might have scheduled it at Coney Island.
At least we could ride the Wonder Wheel or Cyclone.

Dredging has been used before. It's good for some years until the muck and crap build up again.
Truck the muck to De Blasio's home in Brooklyn.
We took Brooklyn's ashes at what is now FMCP at the great Corona ash dump for decades.

Correct me if I'm wrong, but I was told that chlorine degrades into an agent orange type substance.
Didn't we use that stuff in Viet Nam against our Oriental enemies?
Hmmmm....that'll take the paint right off of those Dragon Boats. Get a whiff of chlorine at the U.S. Open.
That's right. Kill wildlife and destroy commerce. Grrrrreat solution.

I guess that all of those luxury waterfront condos need to smell more like roses than shit otherwise they are more difficult to market.
So.....a dash of chlorine in the bay toilet is the best they can come up with in a short time.

So what is the population per square mile in Flooshing?
Something like 28,868 people per square mile?
Yeah we need more condos and apartment buildings.
Soon we all need to learn how to fly in order to get around here.