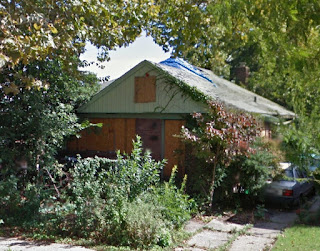 The house seen above, located at 50-19 175 Place in Fresh Meadows, has been abandoned for more than 10 years, according to those who live near it.

State Sen. Tony Avella (D-Bayside) stood outside the house last Friday and said the site is at least “much better” than it was when he first heard about it, adding that it had overgrown weeds in the front and backyards.

“There’s a shack back there,” Avella said. “You couldn’t even see that before.”

He wasn’t sure which city agency cleaned up the house, but said more work needs to be done to remove the blight from the community.

According to Avella, the registered homeowner has been dead for more than 10 years and her son is nowhere to be found.
Posted by Queens Crapper at 12:14 AM

Talking about EYESORES: WE RESPECTFULLY SUGGEST THE FOLLOWING NEEDS YOUR IMMEDIATE ATTENTION.

As a reminder, there are 7 structures (4 houses & 3 garages and a "private road") located at 39-39 223rd Street Bayside, that make up the Huang Development. It is not only an EYESORE (houses visibly deteriorating and property not maintained; basement and 1st floors boarded up; property full of dog poop; raccoons; vermin both human and animal) -- it has been and continues to be a serious QUALITY OF LIFE issue. The situation is UNSAFE.

The City, DOB, HPD and the Huang Family need to be "hammered" until appropriate action is taken regarding this Development. Yes, they need to be inundated with complaints and requests to do something about this "illegal" and "unsafe" project.

By the way, the City should put a lien on the structures due to the many still outstanding fines both DOB and ECB fines levied on the project. If the City cannot legally accomplished that at this point in time, our legislators NEED TO pass the laws to accomplish that.

Senator: We the adjacent and surrounding neighbors of the Huang Development on 223rd Street in Bayside respectfully ask that your office continue their long-time efforts (making phone calls; writing letters and contacting other City agencies) to get the City, NYC Sanitation and Health Departments, the DOB and HPD to adequately address this horrendous, aborted construction project. It is a serious Quality of Life issue and a MAJOR EYESORE. We need action to get these buildings demolished.

Now that school is back and the winter is approaching, we are once again concerned about the students from the local schools hanging out in the houses. These empty structures without certificates of occupancy have been and continue to be vandalized.

It is an unsafe situation. The 111th Precinct has been called to the site on many occasions. These houses need to be demolished as they have been languishing for more than 10 years. Please consider passing legislation (which is long overdue) to give the City the right to demolish structures such as these that create serious Quality of Life issues.

Councilman Vallone: We respectfully request that you personally visit the site to see firsthand what it looks like. Then, we ask that you put some serious effort in to doing something about the situation. I should like to note that Councilman Daniel Halloran did nothing that we are aware of to fight this project.

Careful what you ask for!

It will be sold, bulldozed, and overdeveloped...

Maybe a nice spot for a homeless shelter.

So why hasn't the Public Administrator taken over?

I don't get how they 'can't find' the son. Are they even trying? Have they looked on Facebook?

Not too far away, the house on Homelawn street and 83rd avenue takes the prize for an abandoned derelict house that should be take over.

Surely, the NYS Attorney General's office would know how to contact Alice, Thomas & Henry Huang. Someone in their office must be supervising their activities to see that each of them are in "full" compliance with their Plea Agreements.

Yeah, sure. We should spend millions of tax dollars to attempt to track down and ultimately not find a son who is as gone gone gone as his 10-year dead mother. (Anyone look inside the house? Maybe he's in there dead, as well). The PA needs to wrap this up ASAP. Fresh Meadows is one of the last nice spots in Queens.

As far as abandoned eyesores go, that's not that bad. Just let vines grow everywhere until the owner is found.

Haven't driven past it for several months, but there's a creepy-looking house that looks to be abandoned in Flushing on 38th Avenue between Parsons and 147th Street.

Small house, Give it to me! As long as it's stable with no foundation damage I will have it restored with no tumor "additions" in 6 months (after winter).

It only takes 10 years in New York for a squatter to use 'adverse possession' to take legal ownership of a property, and one of the requirements of an adverse possession claim is that the person both lived openly in the property and that they maintained/improved the property. This house/neighborhood could have benefited from someone mowing the lawn, and taking care of the house. It is too bad there wasn't a responsible squatter who moved in a decade ago and who took care of the property. They could have become a homeowner by now.