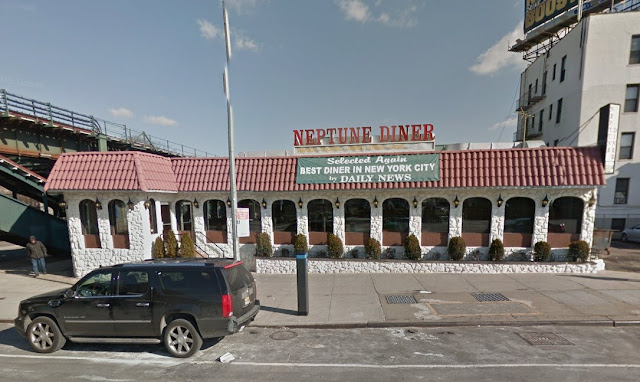 Historians devoted to the study of diners—yes, that's a thing—estimate there were 1,000 diners in the city a generation ago. There are now only 398 establishments that describe themselves as diners or coffee shops, according to city Department of Health records. Recent casualties include Soup Burg on the Upper East Side, the Café Edison in midtown and the El Greco Diner in Sheepshead Bay, Brooklyn. (See sidebar below for our explanation of exactly what a diner is.)

The star-shaped, 1962-vintage Market Diner in midtown figures to be next. In July, The Real Deal reported that developer Moinian Group had filed with the city to demolish the 11th Avenue building and replace it with a 13-story condominium.

Indeed, something of a diner deathwatch exists among New Yorkers concerned about losing their favorite places for affordable comfort food. Earlier this year, a rumor surfaced on Reddit and Twitter that the popular Neptune Diner in Queens would close, which owner George Katsihtis denies. The clock is also ticking for the Evergreen Diner, which occupies part of the first floor of a parking garage on West 47th Street, just off Times Square. The Evergreen generates about $1.5 million in annual revenue, but barely makes a profit. "One day they will raise my rent and I will close," said co-owner Ilias "Lou" Argena, who pays about $25,000 a month.

"To me, it's not surprising that diners are closing in New York," said Jan Whitaker, a historian in Amherst, Mass., who writes a blog called Restauranting Through History. "Given how expensive everything is in New York, the wonder is they survive at all."
Posted by Queens Crapper at 12:11 AM

According to Bloomberg, 8 out of 10 entrepreneurs who start businesses fail within the first 18 months. A whopping 80% crash and burn.

You cannot force someone to run a failing business.

The city could take it via eminent domain and make it a soup kitchen for all the homeless.

Hey!
Let's save it.
We can landmark it, and turn it into a museum!
The history of heartburn...

At one time, there were two competing diners on Astoria Blvd at 94th Street: the Red Wagon and the Deerhead.

Both served good food, and my parents (now diseased) ate there frequently.

The Buccaneer on 93rd Street and Astoria Blvd replaced one of them (forgot which, it's been years now), and that diner is still hanging in there.

The Mark Twain Diner on Northern Blvd (around 74th Street) is long gone too.

This makes me wonder how long Shalimar will last considering the recent spate of glass condo towers rising in Rego Park.

Combine the bad economics of diners (exorbitant rents etc.) with young New Yorkers' taste for foreign food, artisanal pizza, outdoor cafes etc. etc. and you can see why diners are doomed. In 10 years you will need to go out of NYC to find one. Every time I revisit a neighborhood, the diner is gone.

The Westway Diner, which I frequent in Hell's Kitchen, makes a fortune in business. They just spent another fortune renovating it.
Neptune used to have the best cheese cake in NYC.

LOL! If it goes, just call Michael Perlman the diner crusader.
He can save it by moving it out west.

"Earlier this year, a rumor surfaced on Reddit and Twitter that the popular Neptune Diner in Queens would close, which owner George Katsihtis denies. "

haven't been to a diner in years. except for a very select few they all have bland, tasteless and overcooked food along with cheap Folgers/Maxwell House fake type coffee if you eat there for breakfast.

There is one good one in Union Square, used be a good one in Chelsea that served Mexican style breakfast that closed down years ago and I've eaten at a good one close to Park Slope but forgot the name.

I live close to 3 diners in Queens and never go to any of them. If i want a burger I'll go to bareburger.

Bareburger = overpriced fake "healthy" meat, so we don't feel bad about the meat-eating.

Neptune IS going to close, either later this year or in first quarter 2016. The owner sold his lease to a developer who paid a reported $1ml for each of the 5 years he had left. The Staples behind it was sold in the same package and will close as well.

I am in the restaurant industry and there is no question that public tastes have changed over the last 15 years.

One of the most telling indicators came during the 2007-9 recession. In past recessions our lower priced, diner-coffee shop stores held-on in a recession and some locations actually saw increased business. This time around it was very different.

Younger patrons want more "specialized" types of even the common burger and locations that are too associated with the old line are having trouble attracting the next generation.

Some themed restaurants such as Silver Diner, Johnny Rockets and locally, Jackson hole have done Ok with the nostalgia angle, but even they are down from a decade ago.

I love going to diners! Our son had his first birthday party at the Scobee Diner in Little Neck, in the room with the skylight. I am retired and meet friends for breakfast, brunch, lunch, dinner, or coffee in the diners in northeast Queens or north west Nassau-Bayside Diner, the Seven Seas, the Blue Bay, the Landmark in Manhassett, the Omega on Lakeville, the Triple Crown on Hillside, the Apollo in East Meadow. I just heard from a friend that the Skyline Diner on Lakeville and Union Turnpike looked boarded up and closed when she went past it today.

I think some are missing the point. The vanishing of the dinners is part of a broader phenomenon - NYC' transformation into a ghetto of condominiums where most inhabitants know nothing, have no skills, no brains, no taste - a perfect vertical communist society shaped according to the will of the Democratic Communist Party.

The Landmark in Manhassett ?
The only diner in Manhasset is Louie the Greek on Plandome road.
Landmark is in in Roslyn on Northern across from where Benzi & Lexie kill each weekly over parking spaces at the miracle mile nail salon. I wont go near Seven Seas (Great Neck) or Landmark (Roslyn) with a nice car because all Persian housewives cant drive for shit !! They will hit and run ya right with the usual black Benz right in front the cops, these nasty NASTY people don't give a shit!

Most diners serve overpriced crap.
Somewhere along the line basic diners thought that they were restaurants. They published Bible sized menus, introduced pseudo maitre d's.,yadda yadda.
Most of their food is pre cooked from Costcos and microwaved.
An average sea food entree runs more than most restaurants and is crap.
Diners are on,y good for ham 'n eggs type food. Burgers? Maybe. After that you do better in a real eatery!

Ever go to Kane's diner?
A Flushing leftover. Their quirky menu is impossible to read.
It's usually chock full of customers, especially on Sunday.
Why? Because it is the last Western holdout in an Oriental province.
The food is so-so. Some is raunchy. But if you're tired of egg rolls,
Their eggs and bacon are good.

Hi Joe maybe the Landmark's in Roslyn then. It's off the corner of Searingtown and Northern. Rarely go across the street to Lexi/Benziland. It does sound like you spend a lot of time in Great Neck!

I avoid driving in Great Neck like the plague, NO THANKS !!!
I like Kane's diner and that truck stop Clinton diner on Rust Street & Maspeth ave. (however Im told some people "fancied" it up and its now call it "Goodfellas" with raised prices--and that's so friggan sad.
Both are no frills, still pretty cheap and fast. Open hot turkey with frys & tap NYC Croaton water, coffee and Im good to go. No need for the warm bread & butter, fancy silverware, fancy plates etc.

Love diners. I work late and have breakfast in the afternoon and almost always get a soup with horseradish to go. I live midway between the Classic diner on Myrtle/ lefferts and the Middle Village diner on Metro/74st. If you're a reall ny'er you know what soups are served on what days.....

Any diner, anywhere when it is closing time at the bar.

That's an underutilized one story taxpayer building. It will go high rise someday soon if the price that's offered for it is high enough.

ALL OF THIS IS HOG WASH. EVERYONE KNOWS THAT THE BEST DINER IN NYC IS IHOP !!

The owners may be Greek, but the management and workers are all Waki Paki