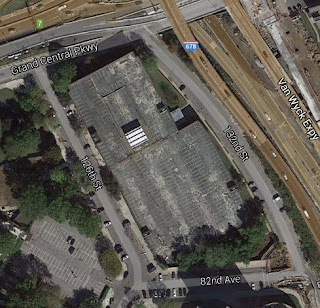 With the need for parking still great around Borough Hall, the city plans to turn the former parking garage behind the hall into a flat parking area.

The crumbling garage was demolished this past July. Sharon Lee, a spokesperson for Borough President Melinda Katz, stated there will be an, “at grade (flat, not elevated) street level municipal parking lot.”

“They are working on the parking lot design now,” said Lee, adding that there will be a January 2016 procurement, bid and anticipated construction completion is first quarter of 2017.”

The project was initially slated to finished this fall, but has been extended for one year.
Posted by Queens Crapper at 12:07 AM


Donald Trump would have this done by Saturday.

It takes a year and a half to work through the half baked scheme legislators and bureaucrats put together so they can try to hide that they're contractor buddy is ripping you off.

So they demolished a garage for parking to replace it with a lot for parking.

the lonely planet is in actuality a bizarro planet.

You know it takes a lot of thought and math to figure out where to put all those yellow lines.

I wonder how many regular parking spots there will be, if any, after they have "city officials only" and handicapped spots.
You know they do not care about you. I am sure there will be a nice bicycle rack there.

How much do you think this will have cost YOU the taxpayer when it is all done?

Parking lot design? How about a rectangle?

This type of delay can be seen everywhere a city project is underway.
The Parks Dept announced an initiative to begin citywide improvement of many neighborhood 'pocket parks' that had been neglected for years.
Tilly Park, such a park across from the former Jamaica HS in Jamaica Hills, was one such park.
3/4 of the park was fenced off, most recently the heavily used children's playground, starting last year.
You can walk through the park any day of the week and see absolutely nothing being done, not a worker in site.
Once or twice I saw a backhoe/grader being operated, otherwise nothing.
At this rate, it will take years to complete a small-scale project.
This is how government does things. Over two years without the use of a park, while an 'improved' one if 'just around the corner'. Deadlines are nothing but vague suggestions.

But the useless politicians will be there for the ribon cutting and photo ops, with the lapdog press there, bloviating all about how they fixed it...

For Queens this parking lot is being completed early.

Look at how long it took to complete the Little Bay Park restroom.

Look at that mess that Queens Plaza is - everything wrong from the fussy park bench design to the rat loving overgrown marsh look. What was it $20 or $30 million?

Took 6 months to complete the curb and sidewalk at the bus stop at 34th street and Park avenue in Manhattan. No logical explanation.

What about the perpetual construction on the Van Wyck, near Atlantic Avenue? Can't tell you how many perfectly sunny days I drove past there and saw NO ONE working on the construction project, which makes driving there congested and slow.

There are very few places on local Queens streets where I can actually drive the posted speed limit, due to the abysmal state of the streets. Potholes, wavy pavement, sinkholes, asphalt degraded into separate chunks, etc., conditions I've seen unimproved for years. Where the HELL is taxpayer money going to, if not for these basic necessities to keep a city going? But there's always plenty of money for programs for illegals available, and drug programs that pour money down the drain, etc.

But there's always plenty of money for programs for illegals available, and drug programs that pour money down the drain, etc.

I am certain that the 'illegals' and 'special needs people' will tell you they get the same treatment as parks and streets. Look how much money landlords get to house the homeless, for example.

No one, except the pols that do everything possible to keep the public in the dark, campaign donors that have the machinery of the city placed at their disposal, a handful of well connected thugs running welfare state programs and the corrupt management of the few unions benefit from whats going on around here.

Example after example on this blog points to a detached chip-on-the-shoulder elite in politics that have hijacked our city ... and our money.