Avella rally today in opposition to Pan Am shelter 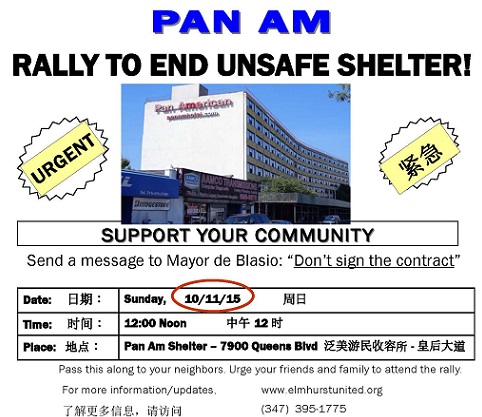 (Queens, NY) October 11th at 12:00 PM, State Senator Tony Avella will be holding a rally with Elmhurst United to oppose the use of the former Pan Am hotel as a shelter. The Rally will be held outside of the shelter on the corner of Hillyer Street and Queens Boulevard.

The building’s numerous violations and lack of kitchens have blocked attempts to grant the shelter permanent status. Senator Avella and Elmhurst United now call for use of the facility to be discontinued and for proper accommodations to be provided for the homeless

WHERE: On the corner of Queens Boulevard and Hillyer Street, Elmhurst, Queens
Posted by Queens Crapper at 12:14 AM

But what is he really doing to stop this?

This will become permanently temporary...

What else do you think that he should do?

State money goes to DHS. How about some hearings on the way that money gets pissed away to the politically connected operates of these hell holes.

That hurts donations to campaigns...