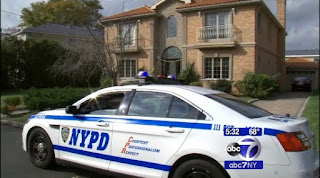 Mother and daughter were dozing in a bedroom when bullets began flying in the basement of the Queens mansion they had rented out for a party through Airbnb.

That’s the story homeowner Daisy Shahnaz told her angry neighbors in Bayside on Monday after two men were wounded by gunfire during a wild party at her home.

But Shahnaz’s daughter evidently did not get her mother’s memo.

“I wasn’t there,” Sarah Bhuiya said after a Daily News reporter told her about the account her mother gave neighbors. “Yeah, well, my neighbors were misinformed.”
Posted by Queens Crapper at 7:12 AM

Daisy has the brains of compulsive lying 5 year old. Although this womanchild might actually bring down AIRbnb with her immature bullshit, this is going to get worse you millenial entrepreneurs.

How would one sleep through 200 drunk and coked-up idiots yelling and stomping with music blasting all night even in the basement, in addition to the spillage of said idiots outside. And if they were outside they must have been yelling too, which makes it bizarre that cops never showed up, unless no one called and that house is far apart from the others.

To be fair, in the dirty southeast of Queens, there can be dozens of house parties by regular homeowners going on every weekend on every block, I've seen call-a-heads outside sometimes. It's like these people think they are in a catering hall as well as imitating the nite clubs they wish they can access.

Maybe she was sleeping off her drugs.

Both mother and daughter will be losing that Mc Mansion soon anyway. When the lawsuits are over they'll be lucky to have the clothes on their backs. Homeowner's insurance DOES NOT cover this kind of activity.

Liars. they're "lawyering up" - that's why they said that.

The houses are not far apart at all. The security company that has the contract for that association should be fired.

Just cry racism Daisy or clame your illegally here in the US and the Press will protect you and make you the Victim
Politicians will mow your lawn And walk your dog,Trust Me.

Claim the house is a mosque and you were holding a prayer service and your troubles are over.
Start a go fund me and liberals will pay off your mortgage with my money and Mayor DiBlasios will hold a presser on your lawn and your Golden,
Say the police abused you too,that goes a long way also,you might even get invited to the White House.

Maybe even Al Sharpton will show up to denounce the way your rights have been trampled. You two Hajis (or Svetlanas, or whatever you are) are going to be rolling in dough by the end of the week. Ain't America Great??!!

The past 3 commenters should have their own right wing radio talk show. They've got the basics down: the pitched fervor, channeling all blame for everything at Democrats, the middle class white American victim syndrome.

As if Republican leadership of this city would take it from the hands of REBNY and AirBNB, protect our history and housing, abolish the massage parlors and gambling joints, and give us northeast Queens back.

The last republican city councilman from Bayside is in a federal cell, possibly setting up a shrine for the pagan Norse God of ODEN.

Her graet uncle was Sgt Schultz. She knows nothing,nothing!

" They've got the basics down: the pitched fervor, channeling all blame for everything at Democrats, the middle class white American victim syndrome.

As if Republican leadership of this city would take it from the hands of REBNY and AirBNB, protect our history and housing, abolish the massage parlors and gambling joints, and give us northeast Queens back."

And what Dems are preserving the middle class? The whole zoning for affordability that DiBlasio and the council are pushing was written by REBNY.

It's not a Repub or Dem thing. It's about holding politicians accountable, they should be worried about their jobs. Career politicians of all parties should be held in contempt.
It' criminal the way we allow political families to have their own little fiefdoms

They will get the corner suite at the new homeless shelter...

"give us northeast Queens back"
Give us back our quiet skies without the helicopters and low flying jets !

and when you have one or 2 republicans on the council, how much can they get done?

It's not the crime that they get you on - it's the coverup.

If this get AirBNB out of NYC, then the price of two wounded gang-bangers is one which I am more than willing to pay.

Both Democrats and Republicans are in the pocket of REBNY...politics equal opportunity campaign supporters.
REBNY is the third silent party in NYC that always wins any election.