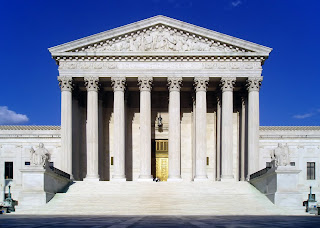 The de Blasio administration has joined a Supreme Court fight that could change the way voting districts are carved up to exclude residents like immigrants and felons from the population count, the Daily News has learned.

If successful, Evenwel vs. Abbott would dramatically change the political landscape in immigrant-rich communities like New York, because it would draw districts to include only eligible voters.

It would “effectively wipe millions of individual residents and entire families off the map, rendering those residents and their unique needs invisible to our local democracy,” the brief read.

The brief argues that the city’s use of total population in apportioning districts “conforms with fundamental tenets of representational democracy.”

It ensures that “all residents are entitled to equal representation, a principle of particular importance given the nation’s historic commitment to diversity, inclusion and robust civic involvement and debate,” the brief adds.

Zachary Carter, head of the city Law Department, said that counting everyone in an electoral district is important because all residents use city services, not just those eligible to vote.
Posted by Queens Crapper at 12:42 AM

Yes - let's give all the illegals the right to vote themselves more goodies that YOU are paying for...

You can be an immigrant here legally and not have the right to vote. You need to obtain citizenship first.

The old term was "resident alien" and when illegal immigration was not a significant problem, even the legal non-citizen residents of the United States had to go to the Post Office each January and sign a form that they were not attempting to overthrow the government of the Unites States. At one point, one even had to declare under penalty of perjury that they were not a Communist.

Wait, wait - we're talking voting districts, not service-users, right? so it should be based on the number of VOTERS. Perhaps we should also take low-turnout areas into account, too.

I normally would be for counting voters and legal residents, but this is NYC and we are a sanctuary city. There will be no way to count which non-citizens are legal residents and which are illegal because the government is not allowed to ask. I certainly wouldn't trust the Democrat party to make this judgement. They never saw an illegal immigrant they didn't want to lavish with services, food stamps, legal representation and hopefully one day the right to vote! for them!

I have mixed feelings about this lawsuit because it only addresses half of the issue of electoral college imbalanced, and if the lawsuit is won, the outcome would be the weakening of the rights of every eligible voter in NY City and NY State.

Right now very low populated states such as Wyoming are given disproportionate election power because they get a minimum of 1 vote for each senator, plus a additional votes assigned proportional based on the number of residents. Thus Wyoming gets 3 votes for 500k people, or 1 vote per 133k people in the state. On the other hand NY with a population of 8.4m gets only 29 votes or 1 vote per 290k, so our individual vote have less than 1/2 the election power of a voter in Wyoming. In the current system by counting the immigrant population while creating election districts, we are actually helping to slightly re-balance the voting power imbalance by actually making each eligible voter in NY count closer to 1 vote per 200k eligible voters so it actually lessens the election power imbalance.
If this lawsuit wins, this imbalance will shift the other way and become even worse as New York loses more electoral power, and each eligible voter in the state will have less voting power than under the current system, such that a single voter in NY would have 1/3 the election power than someone in Wyoming.

Yes, because once you start excluding felons, our glorious mosaic will no longer be considered diverse!

Only in the US illegal immigrants vote, only in America the stupidity and obscenity of a party can be tolerated.. And only in America people debate what is obviously illegal by the standards of any other democracy.. Such president, such mayor such party - stupids corrupted illiterates.

"If this lawsuit wins, this imbalance will shift the other way and become even worse as New York loses more electoral power, and each eligible voter in the state will have less voting power than under the current system".

That is the true es essence of this suit. That, and another case that seeks to ruin unions ability to collect dues from all members thus weakening their organizing power.

This and the "voter fraud" bills are the result of a reactionary wing of the republican party as it tries to hold off its extinction while securing the power of certain classes over the rest of us.

See this for what it is.