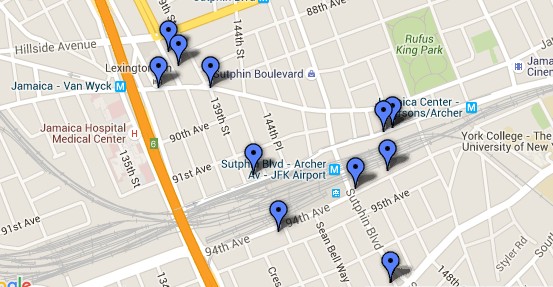 Downtown Jamaica is turning into the borough’s epicenter of hotels.

Kaushik Patel, a Queens-based developer, filed an application last week with the Department of Buildings to build a new massive complex consisting of three adjacent hotels, joining a long list of lodging projects planned for the area.

The new complex, at the intersection of 146th Street, Sutphin Boulevard and 101st Avenue will bring nearly 400 rooms to the area, as first reported by The Real Deal.

That has to be the CRAPPIEST NEIGHBORHOOD IN QUEENS!!! Why is he building hotels there? Hmmmm.

101 Avenue? That area is a crime and poverty-ridden dump! No restaurants. No transportation. No points of interest...

This is how they empty out the housing projects and open up waterfront property with city views. Its a long term plan. Thats why they are being built all over.
Community boards should deny. But we know how that wotks dont we.

Whoever is involved with the BID for this area is using the Field Of Dreams approach to gentrify the town. They seem to think if a few creative restaurants with chalkboards in front and massive hotels will bring more tourism and hipsters and force the scum and in the process the decent folks out of town.

good luck with that stupid.

Future housing for the homeless. That's what these are.

The BIDs are just another scam!

Besides these three hotels going up, there are plans for seven more around the area, not counting the hotels we already have (at least one, a former Quality Inn, has been turned into a homeless shelter).

I mean doesn’t this send up a red flag to Community Board 12, elected officials or other leaders in the community or are some, like the elected officials getting some extra money into their campaign chests or some other little back room deal. Think about it, of all the development that this community needs, do hotels come to the top of the list. How many hotels are being put up in Forest Hills or Rego Park. Sure many have been put up in LIC, which makes some sense, considering the proximity to Manhattan, but even there, a recent hotel, The Verve, has been turned into a women’s shelter.

Could this be part of the Jamaica Now Initiative Plan. I mean the mayor keeps saying what a major homeless problem we have, I mean Jamaica has had shit dumped all in this community for years, why not this (a huge homeless shelter complex) or what about the Queens Bridge Projects in LIC, nice waterfront property that could be luxury apartments and well, those project folks are going to have to go somewhere, why not put them in Jamaica.

As far as I know, I have not heard any leaders from the community speak out about the huge amount of hotels being built in the area, yet, there has been no type of clean-up of the area, and really has not been any type of nice apartment buildings going up for middle class folks, what is left of them. And let’s face it, where some of those hotels are going up, the area is run down, dirty, crime ridden and no types of amenities there at all. I mean, was I sleeping when Jamaica became a mega tourist attraction, that all these hotels are needed for the demand. Well, if things to do on your list are seeing the Ghetto of Queens, then, yeah I guess.

Other than Patel who are the developers of these other hotels? What can be done to thwart the projects?

There's a very hot place in hell for these developers who know exactly what their projects will end up becoming. Blood money. Enjoy it now while you're making it, but you will have to answer one day and it won't be pretty. Karma is a real bitch. We need to call these people out, call their offices, get their photos in the local papers, embarrass the shit out of them. Make them into the public enemies that they really are before their phony hotels go up. I'm sick of what's going on in Queens. Time to stop these barbarians from raping us while we sleep.

The South Bronx is being reincarnated in South Jamaica. Who really is behind this scheme and scam?

I don't know about you, but whenever I am in Jamaica I see the tourists walking up and down Jamaica Ave. and Archer Ave. with their wheeled luggage and they are asking everyone "Where is there a vacant hotel room?"

Has anyone looked at the vacancy rates for hotels already in the area?

Or is this the economic paradox of supply creating its own demand?

Shelters. No question about this at all.

Sutphin Blvd , Jamaica and Hillside Av are the ugliest, dirtiest, smelliest and most uninviting areas of Jamaica, if not the entire city. It truly is a cesspool that hasn't been cleaned out for decades.

This area is and has been a dumping ground for homeless and section 8 crowd starting with Bloomberg. The middle class residents in community board 10 are fighting this as well. They fight, complain, but they build anyway. Many of my neighbors (middle class) are moving away because you can now see homeless people roaming the streets with their garbage bags harassing people. I have an elderly parent, so I'm stuck here. I can tell you this, you don't see this happening in Glendale.......

How do we get the names of all of the different developers who are putting these hotels up?

They think that they can improve Jamaica's low life image by building hotels to encourage....LOL....tourism.

And, with such grinding conditions of illegal immigration, overcrowded conditions, corrupt development deals (that continue to be pounded out, by even more corrupt and failed political leadership), the New York in which I was born and raised (replete with a thriving, flourishing, well paid American middle class), is now almost an exact replica of the abject poverty, and starkly contrasting wealth of Venezuela, in South America---where there exists compartmentalized, gated and heavily guarded pockets of extreme wealth and privilege---surrounded by enveloping poverty and shanty towns that metastasize with rapid speed.

Further, we are seeing the same cookie-cutter occurrences in Los Angeles, San Francisco (the worst example yet!), Vancouver, and London overseas. And, with every geographic example, there exists a correlating connection to corporate oligarchy, and the entrenched, billionaire class control of our collapsing political system, and 40 years of monstrous corporate greed, corporate wage slavery (and starvation wages for the rank-and-file), corporate outsourcing (that has all but decimated all former American manufacturing jobs, with wages that used to keep pace with inflation), and corporate welfare (where tax exempt, multi-national, billion dollar companies continue to receive unconscionable tax rebates, while offshoring their massive profits overseas), and collectively these corrupt, predatory and voracious thieves have caused more systemic damage and societal collapse, than any possible threat by outside nuclear proliferation!

Hence, the enemy, all along (and always), has been right here on American terrain---from within our own, now irreparably tonsured borders---and getting worse by the hour!

Queeeens-bridge, this is where you are going. (sing-song)

Trump tried to buy that property over ten years ago. He was told each tenant would need to be relocated to appropriate housing, of which there were none at the time. He gave up.

Well, now the marxist mayor has made his pals all the richer and their will soon be a place to warehouse these folks.

Meanwhile, hipster scum gets the view. I hope all the heavy metals from the bridge traffic contaminates their lattes & craft beer!

Jamaica is a transportation hub - easy access to and from JFK, easy access to both the city and Long Island via both subway and LIRR. I think the idea is to get tourists who don't want to pay Manhattan prices and/or want to see more than just Manhattan.

Also, it seems a lot of developers consider the complete gentrification of NYC to be inevitable, and see Jamaica as the next logical place, and want to get in early.

anon, you don't get it: The places with the largest numbers of homeless and people living in apartments for free or heavily subsidized are precisely the places that resist gentrification.

Remember the movie Grand Hotel?. They're making a remake in Jamaica: Gross Hotel.

yes 3000, not much of a coincidence that it's the market rate for rentals anywhere where pestilent gentrification has taken place.

I must add that it is happening in Seattle as well. There are posters and fliers everywhere about the teardowns, zoning changes, variances and rent increases. People really up in arms about it in the Pacific Northwest.

I live in Flushing, but I get to compare the two areas when I travel.

For further proof of how exclusionary that our entire city has now almost completely transformed itself by massive, oligarchical greed and over development, I highly recommend the recently released documentary that was broadcast on HBO, entitled, 'San Francisco 2.0,' as directed by Alexandra Pelosi (former Speaker of the House Nancy Pelosi's daughter).

Although it's only 45 minutes long, this sad and riveting documentary is a powerful meditation on how the entire six square miles of San Francisco is under siege by Silicon Valley oligarchs, and they are buying up parcels of land in the city and displacing thousands of stable, hardworking residents, which result in homelessness and abandonment, like nothing that I have ever seen before. It is also available on Netflix, and the stories and corporate ordered destruction of the City By The Bay is as soul crushing as it is unconscionable.

Alas, the illusion of progress never felt so heartless, primitive and insidious!

Spot on.
Just want to add that European countries are experiencing the same joy.
Seems to be a global thingy.