LIC hotel alleged to have bedbugs 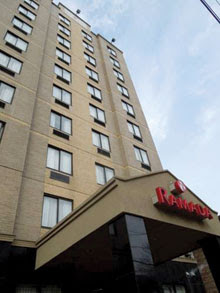 The Ramada Hotel in Long Island City has bed bugs in Room 303, at least two guests who stayed there said.

On Sept. 19, a couple experienced exactly this when staying at Ramada Hotel in Long Island City. Gym teacher Steven McCarthy of Jamaica and his girlfriend were savagely bitten more than 40 times in room 303 by the tiny insects.

“We were horrified,” McCarthy said. “We immediately went to complain.”

He said he called 311 to report the problem and was even more shocked at the response he got.

“They told me I had to schedule an appointment to investigate the hotel room,” McCarthy explained with a laugh. “I told them I wasn’t there anymore. I didn’t live there.”

The couple reached out to the Department of Housing and Preservation inspectors, they responded, but the hotel refused inspectors to be allowed to enter the premises after four attempts to do so.

“Are they still renting out that room?” McCarthy wondered aloud. “I just think people should know about this.”

- See more at: http://queenstribune.com/bed-bugs-attack-couple-in-lic-hotel-room/#sthash.MYxEqP7n.dpuf
Posted by Queens Crapper at 12:13 AM

Another George Stamatiades gift to the neighborhood. Will this soon be a 9 story shelter in the middle of a 2 story community? From the reviews it would be no surprise:

They are racist towards blacks went there 8 oclock in the morning.. and they didn't even check the computer, she just looked at me and said we booked.... What a racist business

unknown bugs!!! I got bites during my stay which later developed into bad infections. AVOID!!!

Stay away. They stole our money. Professional con artist work here. Poor hotel, rude staff, poor breakfast, etc. They are not close to the subway and you have to walk through a very dangerous neighborhood (projects). Bed bugs, couldn't sleep, itching all night with bumps in the morning. Horrible.

Why I would not stay in a hotel outside of Manhattan:

The only positive thing I can say is that the location of this hotel is close to the train which is a plus, and every time we interacted w/the staff they were courteous. Other than that everything about this hotel was disgusting. Stains on the sheets, towels, curtains, doors, walls, mold, spider webs in the corners and ceilings, gum and other mysterious leftovers on the floor (which clearly hadn't been cleaned prior to our arrival), an obvious cigarette burn in one of the sheets.....I could go on and on. We paid WAY too much for this place but we were in a pinch and didn't know any better. NOW WE KNOW BETTER. Anyone that stays here and reviews it with more than 1 star must have different standards of cleanliness than us. We expected simple and clean, no frills, I would have even given back the free breakfast which we only ate the oatmeal because they were sealed packets. The hotel rations out the food and starts putting it out the night before so not sure how fresh that is, there will be 30 people pushing and shoving for a crusty bagel and the guy comes out with 5 hardboiled eggs at a time....they ration out everything so they won't run out, I guess???? The counters and toaster and shelves w/the bagels and donuts had about a years worth of buildup on it, we are completely amazed this place didn't have roaches! DON'T STAY HERE!

When you read these reviews, and are a former hotel worker, you know these buildings are not run by hotel people. You have to ask yourself is the hotel thing just a front for a developer to make a donation to a politician to put up a big building that will rake in millions in fees as a shelter?

Was here for four days first time in New york... if I was riding my motorcycle and just stopping for the night it would do. .. but being a tourist and trying to enjoy New York.. this place is horrible. ... sheets feel like plastic... the breakfast. .. was like stopping at a gas station and they didn't offer anything. ....I will never stay here again. ... the only positive thing was it was 3 blocks from the trains

We rented multiple rooms while in New York for a conference and these guys ransacked two of them during the day put my staffs clothes in garbage bags and re-rented the rooms. They tried to kick out another guest in the middle of the night and sprayed toilet water all over one of the bathrooms and didn't clean it up. Not to mention this is a pretty scary area... Stay here at your own risk!

This is what happens when you regulate and outlaw all the products that work...

Quote: we stayed in hotels all over the East Coast and this is the worst place ever.

Ah Jimmy, Cathy, George (forget Michael and Costa) what the F*k did you do to this community with all these hotels. What the hell is going to happen to our Dutch Kills neighborhood over the next decade?


First I want to say that my boyfriend and I are both from New York City, I grew up in the Bronx and he grew up in Queens. With that being said, we are not easily turned off by locations but this hotel was the WORST ever. When we pulled up, we thought that there was no hotel until we saw the hanging fabric sign that said RAMADA. There was a transvestite outside the hotel waving at my boyfriend as we drove by, when we attempted to park the car she/he approached the car looking and then walked away. It was so bad that we left, meaning we RAN from this place. I recommend that you stay away from this place and never book a hotel with no reviews (our mistake). We have stayed in hotels all over the east coast because we travel a lot and this is by FAR THE WORST PLACE EVER. STAY AWAY IF YOU VALUE YOUR SAFETY!!!!

They are just getting ready to sell it to the city for use as a shelter, bed bugs and all.

Bedbugs never killed anyone and you freaks freak out. rodents, mosquitoes, raccoons, they kill people, but then all you do is complain about spraying and traps. there are freaking rats all over the subways and bedbugs bug you?

NYC Dept. of Homeless Services take note. This place would be perfect for you.

If you've ever had bedbugs you would never have that attitude that they're no big deal and that people shouldn't make such a fuss. They are so hard and expensive to get rid of (you can hardly see them and they are nocturnal) that someone from Bell Environmental that treated my friend's house said the best cure is prevention--do all you can to not bring them in. To say nothing of the psychological trauma of being eaten alive while you sleep. You get bitten once, you may not sleep again for a long time.

You people are making me itch just talking about this shit.

I like how this turned into a yelp feed. I also like that there are more insidious ignorant trolls commenting here or maybe bored pranksters.(bedbugs never killed anyone, but reccoons,rodents and mosquitos do?)

This place is definitely going to be a shelter soon. Have there been any stories or marketing on the hotness of LIC lately? This may be why. And it's clear that De Big Slow is transferring the majority of the 70,000 homeless people to the heralded lonely planet destination.