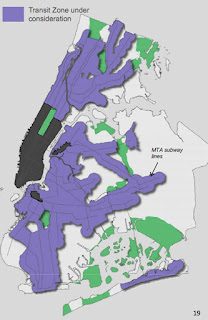 Borough community board heads were outraged over the potential loss of parking spaces Tuesday at the city’s Department of City Planning presentation on the proposed zoning text amendments needed to push forward the mayor’s affordable housing plan for seniors.

City Planning requires changes to zoning regulations in order to meet the goals of the mayor’s affordable housing plan. The presentation on zoning for quality and affordability and mandatory inclusionary housing focused on new senior housing across the borough.

But in those changes, parking space in Queens, the transit wasteland, would disappear from city-owned affordable housing for seniors.

“I want you to drive through the Liberty Avenue corridor late at night and tell me if there is a need for parking or not,” Elizabeth Braton, chairwoman of Community Board 10, said.

The board pointed out the lack of transit hubs across the borough and the difficulties seniors face during the winter. Board members said for seniors having their own vehicle gave them a sense of independence and it was cruel to take that away.

“You don’t have to go far. Why don’t you just try parking outside of Borough Hall tonight?” George Stamatiades, vice chairman of Community Board 1, asked the City Planning officials.
Posted by Queens Crapper at 12:08 AM

Do they also think that the relatives of senior citizens don't drive too? Maybe to help them buy groceries and give them lifts?

Or are shitibike stations the answer and hope the elderly will adjust to them.

they must think these people, in addition to the poor, are expendable.

What's next in the minds of these oblivious city planners...

Anything to reduce the carbon footprint so we can add more housing and make the campaign donors happy. And George Stamatiades, the Scourge of Dutch Kills and disgraced former library trustee as a community advocate is a sick joke. Stop it already.

Or just make it so miserable that they want to just end it all.

"California joins four other states — Oregon, Washington, Vermont and Montana — in allowing such assisted suicides, making the practice legal for nearly 1 in 6 Americans."

They are just fixing the social security budget shortfall...

NYC.gov considers anyone 60 or older a senior. Look at your own family and friends and that will give you a clue as to how many seniors drive and own cars. The people who staff City Planning are mainly recent college grads who are killing time until they can find a better paying job or people that are too stupid to get a job in the private sector (I know, I've been there). I guess we will all have to live by the advice of Rodger Daltry, "hope I die before I get old".

As a 67 year old resident of Jackson Heights (with a 64 year old wife), we both know how difficult it is to find STREET parking. Fortunately, we have a two car garage that we use ALL THE TIME. OK, so I have to go through my back yard, out the fence into a common alleyway with the block behind me, open the garage, pull the car out, and close the garage door BEFORE I can even go anywhere, I am grateful for this....

Almost all of my neighbors do the same, as we live just down the block from the Louis Armstrong School on Junction Blvd. and the teachers there clog my block during school days. I am NOT complaining about the teachers but just trying to say that seniors face enough difficulties these days. Losing ANY amount of parking in whatever neighborhood they live in is a REAL HARDSHIP....

Why not just build parking lots underneath the buildings, like every other development does?

Cars are freedom, which liberals hate. Every vote you ever cast for a Democrat was a vote against America.

If you dig out for a the underground parking lot, it costs lots of money and you my hit a water main :-O

The powers that be are eliminating parking one spot at a time in the hopes of becoming a Utopian Euro-trash city, and we can all just bicycle around like we are in Beijing.
(can you say "daylighting")

I bet the Comrade would love that...

Seniors who drive instead of walking drive up our healthcare costs

Seniors who drive instead of walking drive up our healthcare costs... Obviously spoken by someone who does not know what arthritis is and plans to be Peter Pan.

The car haters spare no one. And they all live in the Manhattan and Downtown Brooklyn bubbles, and simply refuse to accept the fact that much of Queens, South Brooklyn, and Eastern Bronx, are not served by subways!!! People drive every day. They depend on cars!!! They need parking.

A lot of Queens residents work in Nassau County.

warren schreiber is a senior citizen who drives, its very obvious that the deblasio administration doesnt pay attention to nor east queens