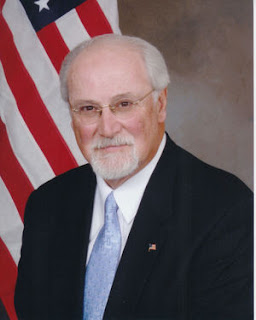 Thomas Ognibene, one of the borough's most active and recognizable Republican fixtures over the last two decades, died on Monday after a battle with cancer at the age of 72.

Ognibene was first elected to the City Council in 1992, where he served the 30th District, encompassing southwest Queens neighborhoods such as Maspeth, Glendale, Ridgewood, Woodhaven and Middle Village, where he lived with his wife, Margaret, from 1986 until his death.

The politician also served as the legislative body's minority leader from 1994 until 2001, when term limits forced his departure from the City Council.

If it wasn't for Tom Ognibene, working class Queens would not have Elmhurst Park or the Stockholm Street historic district. He wasn't your typical politician.
Posted by Queens Crapper at 12:08 AM

I hate to speak ill of the dead, but Crappy, wasn't he caught pretty red-handedly in a DoB pay for play? http://www.nytimes.com/2001/06/14/nyregion/councilman-s-actions-factor-in-inquiry.html
He was never charged, but phone calls were recorded.

He was never charged and never resigned in disgrace, which means it's quite likely that there was no case and no evidence, The building consultant was trying to get a reduced sentence.

All I can say about Ognibene is that when you went to his office with a local problem it usually got resolved. That is a lot more than I can say about our current Council Member.

De mortuis nil nisi
“Speak no ill of the dead”

There are plenty of live ones we can trash!!!

May he be at peace, and prayers for his family and friends,,,

How son before something on the map is renamed after him?

I knew his daughter, Eve. Very nice people, not your usual slimy politicos.

Thomas Ognibene was a great man and councilman who got more for our district in 10 years than all of the electeds combined yet there are morons out there that try to discredit him. Idiots bring up one allegation that was bogus, in fact the Manhattan DA dropped it because there was nothing. People like Anon #1 suck!

Perhaps this entry should have had the same title as the Bloom house in Elmhurst, "Another one bites the dust".
RIP Tom.