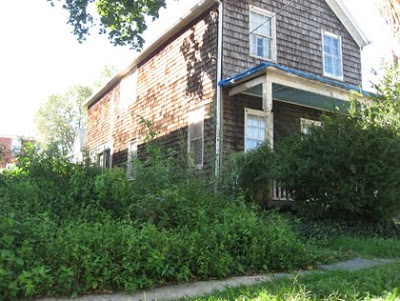 An elderly Whitestone man is the latest victim of West Nile virus and his family says it’s because they’re living next to an abandoned property that has become a breeding ground for insects and rodents.

Totino’s son, Dominick, got the call from the doctor Wednesday that his father tested positive for West Nile. He said he immediately thought the mosquito must have come from “this jungle next door,” — an abandoned house and overgrown lot [at 151-20 18th Ave] that neighborhood residents say they’ve been complaining about for years.

Quite a bit of money owed in fines on that house!

Crappy, didn't you post a story about standing water in Whitestone several months ago? About a standing pond in front of two homes on 5th avenue in Whitestone. I drive by there all the time and its still there. Did they evey fix it or treat it?

This seems to be an ongoing problem in whitestone.

And george who cares what the son does for a living? That was not the point of the story. Topic Maintenance buddy.

so sad to read this about one of our neighbors.

That lot next door is a disgrace and most likely is to blame for this man's serious illness.

Is this the same Dominick Totino who receives $85,000.00 per year from the Borough President's office to take pictures of Helen Marshall?

we have a problem with a lot in our back yard.. the city does nothing to enforce them to clean it up... city is useless..

sorry for the family of this man.

Article just posted says he died. I think this may be a mistake.

They can blame the house next door, but the reality is the mosquitoes have been awful this year all around Whitestone. Even with that house cleaned up, they would still have likely had mosquito problems.

in the Bayside/42 avenue/205street section, the stagnate water because of deteriorated median curbs,may be causing the same mosquito invasion this year. we fortunately have a screened rear patio porch.

but ,even with off/deet ,we hesitated harvesting the garden, because of the mosquitos.