Riot threat was not smart 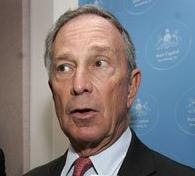 Michael Bloomberg made headlines over the weekend by warning that the weakness of the U.S. economy could lead to riots.

Cairo? Arab Spring? Did Bloomberg mean to suggest that pro-democracy uprisings are a bad thing? That unemployed young people should have refrained from taking part? Has our mayor now been in office so long that he feels a bond with Hosni Mubarak?

What Bloomberg seemed to really be talking about was the importance of passing President Obama's jobs plan. But mentioning the r-word was a critical error. Mayors of large cities should not say "riot" unless there is one. Period.

This is the same guy who told us that poor billionaires wouldn't be able to afford the green fees at Deepdale without illegal alien labor!

But the Quisling media (Hello! Puffington Host!) has no clue. Do they ever stop and consider the role that illegal immigration has on labor markets and employment rates? Does Bloomberg realize that his sanctuary city policy is also increasing the number of potential rioters?

if he stopped his "Sanctuary City" practice of breaking the U.S. Immigration Law, there would be plenty of of jobs for the young people of nyc.

Unless the Bloomberg LP HR department can solve the unemployment problem, the mayor has no right to fan the flames.

Now it's "riots"
looming on the horizon?

Look out you unwary voters---
you're about to be fleeced once again!

Is Bloomberg seeking a 4th term---
based on "marshal law" Mike being the only one who can ensure that "law and order" prevails in NYC?

Emperor Bloomberg need not worry about riots, he has his Praetorian Guard to protect him.

Can you see riots in NYC?

The rest of the world the youth is marching in NYC they are watching video games or the antics of Snookie.

They get the future they work for.

Go back to Boston!

He intentionally said that to stir up race wars among non-jews.

what a dumb ass

the democrat /liberal/rino/progressive anthem : PUSH CLASS WARFARE". or we might lose in 2012 ?

Does this idiot realize that when the riots start, and they will. Wall Street and his house will be the focal points.

"the democrat /liberal/rino/progressive anthem : PUSH CLASS WARFARE". or we might lose in 2012 ?"

"Class warfare" IS being waged...against the WORKING CLASS.

Corporations have spent hundreds of millions of dollars on union busting consultants, ad campaigns and backing republican elitists who often stab the backs of average fools who are tricked by fear and hate into voting for them.

As usual with people like you -half truth, but focused 180 degrees wrong.

"Corporations have spent hundreds of millions of dollars on union busting"

Totally justified in some cases.
A good percentage of these unions are fat cat pigs who operate like the MAFIA in the 1950.
As a guitar player in a 80s band some years back it took 7 people @ 42/hr to bring my small spare amplifier head from my trunk of my car to the stage in the Beacon theater.
All these guys and "sons" were making over $40 and hour doing NOTHING.
Anyway, I had to place it on the curb at the gutter line

1- IATSE Loader to carry from the curb to stage door.
2- IATSE Loader to carry from stage door to stage
3- IATSE Stage "hand" to lift on to stage
4-IATSE Stage Backline technician to place amp in position.
5-IATSE Stage electrician to connect to 110 volt AC power drop (extension cord)
6- IATSE sound'Stage" engineer to place a microphone on it.
7- IATSE Monitor mix engineer to set sound on stage.
8-IATSE FOH (Front of house) sound engineer to mix the house sound.
All this bullsh*t wile 20 more sit around and watch smoke cigars in the "IA lounge" or nap in the balcony.

At one point after the show one of these thugs came out with a baseball bat for carrying my own suitcase down from the dressing room. It was almost 2 AM and these guys were moving like turtles

A family of 4 can no longer afford the Rockefeller Christmas show unless they are Bloombergs rich or hit the lottery.

I'm all for dumping **some** of these unions. Especially the closed "father and son" clan like arrogant sloppy asshol*s that like to push their weight around and run costs up "ghosting" sleeping and doing nothing.

It's right on the money but way above the mental capacity and attention span of most voters.

Wall Street and Bloomberg's town house will be surrounded by the National Guard 24/7/365.

Elite Police forces will be deployed to protect the "better" neighborhoods.

The underprivileged nabes will be strictly on their own.

And after they burn...opportunistic developers will pick up what's left for cheap!

The Harlem riots didn't spread to other parts of the city.

My friend was stationed in the National Guard there back then.

Why not newsworthy -- because of all the greedy reckless dangerous development and the media outlets are covering up for Bloomberg Cooper Union, NYU, NY Law and some hotel owners?

Joe, I was an IA member who left under "honorable" circumstances (went int an unrelated business as my own boss)the abuses you cite here may hold for -some- unions in -some- circumstances...but get real, without collective bargaining workers have ZERO leverage over their bosses.

The whole reason you have neighborhoods such as Flushing, Forest Hills and Bayside are to a great extent, due to the fact that unions permitted average workers to extract decent wages and working conditions from employers.

As for the instance you cite, yeah, closed-shop and nepotistic unions are a disservice to the labor movement.

But let's face facts, even if all of them were fired and replaced with minimum wage Mexicans -all that would happen is more of the gate would go to the Producer-Manager and venue owner. And the stage would be a little more dangerous.

many national vendors stopped the showing of their materials at the JAVITS Center and former Coliseum, because of union abuse of costs and hours, in the past.

my relative (union brainwashed) during this poor economy was convinced by the leaders to strike recently. his company pays $25,000/per year for his health care coverage, for four.
the company wanted his contribution of $200/per month for the policy. and they struck for 10 days and returned to work.

some unionists ,who broke other rules were fined,furloughed, and some fired for crimes against the management.

FOR EVERY ACTION THERE WILL ALWAYS BE A REACTION....

do not jeopardize your family income,during a depression with 9.2 % unemployment and 16% underemployment .there are plenty of bodies to take a $90,000 per year job, with benefits, from a striker with a g.e.d.

I can verify at least that much of what you write is true (a first?).

It has gone up for over twenty years in a row.

In 1991 I had a Blue Cross Wraparound for just under $900/year , now even with a cheaper policy it costs almost $5,000/year. I've had two bouts of kidney stones over that period and payed for those out-of-pocket to keep the premiums from rising.

When old Medicare insulated conservatives like you blast "Obamacare" all you really can offer as alternative is the continuance of a system that is eating us alive.

My accountant tells me to sell a portion of my business, become a low paid (on the books)employee of it and apply for one of NYS's subsidized health plans.

Right now that is against my ethics, but this for-profit insurance scam can't continue.

Dinkins corralled the NYC Rodney King Friday rioters into a cordon sanitaire between Tompkins and Times Squares and had the glaziers and isurers replace all the windows early Staurday. The only injury was a trampled homeless. They also broke the glass at WTC Alexanders.

And the stage would be a little more dangerous.
-------
Union’s always use the “falling lights falling elevators” fear factor, sometimes they will MAKE IT HAPPEN.

Not only with Entertainment but elevators, electric and lots of other things.
There are plenty of MORE QUALIFIED TALENTED sound & light engineers, outriggers, electricians willing to work for a "decent middle class wage" 1000s US citizens 3rd generation Queens New Yorkers who can get jobs all locked out by spoiled union thugs needing to fetch their relatives $230K-1.6 mil a year.
The IATSE for example: You can’t get into that union and work the big rooms unless somebody dies, your a blood relative of a current member and get the "nod" from the big cheeses.
I trust my own techs over some hung-over slob who's only qualification is passing a basic test being a son, son in law, brother with some entry elementary knowledge of the job.
Union’s always use the “falling lights falling elevators” fear factor.
Fact is union workers are not always the best people to have. Many are greedy, lazy, arrogant and don’t give a shit about their work ethics and qualiety because they have TO MUCH job security and protection.
If I owned (for example) a theatre:
No way would I want IA thugs telling me how to run it, how many men I "must" take, and how much to pay them. I don’t need to pay 6 men a full day @ $72hr for 20 work minutes carrying violin cases with a remaining 7 hours 40 minutes hanging out doing nothing.

That crap was going on at Carnegie hall for 20 years. Now they have the Nokia theater in Times Sq.

#22 : my relative's company also includes expensive dental coverage for four.most employers can not afford it. and this dope strikes his job in a depression ?

the Ryan plan would repeal obamacare in full,restoring the $575 Billion stolen from seniors medicare and ending IPAB,the Independent Payment Advisory Board, a cost cutting panel of unelected bureaucrats(death panel).
starting 2022,it would give each new Medicare enrollee a choice of private health insurance and pay a premium to the policy chosen. Ryan says seniors would be safer choosing their own plan rather than putting health care in the hands of IPAB.

Ryan's plan would not effect anybody who is now over 55.

his is a market based plan of vouchers that would pay for private health insurance.

his entitlement reform vision would undo much of the obamacare damage, while charting a new course to ensure Medicare does not run out of money.
medicare can not survive the obamacare $575 billion cuts in the next decade.
the obama law has already stolen $410 Billion of medicare" savings" to expand eligibility for MEDICAID (WELFARE).