He's a paragon of fiscal responsibility! 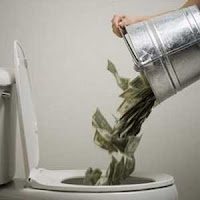 The City Council said Monday that it would investigate cost overruns and delays in the Bloomberg administration’s project of modernizing the personnel system for the municipal work force.

The announcement came as council members; municipal union leaders; the city comptroller, John C. Liu; and the public advocate, Bill De Blasio, charged that the administration had failed to disclose the project’s deeply troubled history. They called for legislation that would force the administration to report to other elected officials when such projects run into problems.

The officials were responding to an article in The New York Times on Saturday that reported that the cost of the personnel system had risen to $363 million from $66 million when Mayor Michael R. Bloomberg first announced it in 2002.
Posted by Queens Crapper at 12:24 AM

So, Mike was "given" a 3rd term to save NYC from financial ruin?

Financial "giant" Bloomberg can't even save it from operating cost over runs!

A lesson to be learned:

Next time, hire a real savvy working class "budgetier" for mayor to run a municipality properly, if you want to save some money---not a spendthrift super rich pampered snob with an arrogant emperor complex---doling out "cushy" patronage jobs to his friends.

How about the City Council investigate how Liu is still getting off not paying the 600K fine by Sanitation?

GASP!!! CALL SENATOR MC CARTHY NOW BEFORE IT'S TOO LATE!!!

Bloomie tripled his net worth during his tenure. Maybe some of this money went to one of his shell companies? Who knows, and besides what does he care! He is a paragon of fiscal responsibility when it comes to his money, not us pee ons!

Famous Mayoral Quote of the day:

WABC 770 Am talk show host ,Aaron Klein says that the WALL ST. (Saul Alinsky inspired ) PROTEST is organized by ex obama green czar, and communist ,Van Jones, former Weather Underground terrorists Jeff Jones and Bill Ayers. He calls it "THE RED ARMY",which is on the Brooklyn Bridge and Wall Street.
he says it has connections to "the war resistors league" and the "Tides Foundation ",which is financed by George Soros.

I hate to break it to you, Gramps, but Saul Alinsky died a long time ago.

did you miss COMMUNIST, Columbia U., Prof. Piven, a Saul Alinsky disciple, interviewed at the "OCCUPY WALL STREET "site on tv ?

she and her husband trained the pupils on the methods of Alinsky for many decades. (CREATE CHAOS, DESTROY THE STATUS QUO, AND BEGIN ANEW)

their pupils have taught these 1960's & 70"s Marxists wannabee, rent a mobs, in the Nations cities.

they really belong in D.C.,where the economic failure is being formulated for the past three years.

Anon No. 8: To deal with the economic waste of the previous eight years.

did you attempt to drive across the Bklyn Bridge, when the marxists "occupied " it ?

you are paying for the extra N.Y.P.D. enforcement of this marxist mob's actions.

the number of journalists there with microphones evidently will pass on the" spread the wealth "message of these tools of socialism, to the rest of the world socialists.

their leaders only promote CHAOS /DISTURBANCE eventually, and then confrontation. the P.D.is controlled. when the marxists have confronted the hardhats,in the past,they took a physical beating.
(N.Y.U. in the 1960's). same Quislings,different faces.

I take the subway.

Our tax dollars pay for NYPD coverage of all demonstrators, whether it be for those guys on the bridge or if its for the Tea Party types. No difference, and so what?

Reread the 1st Amendment of the United States Constitution. People have a right to express their views. They also have a right to not get beat up by thugs (and I'm not talking about the NYPD, people we should be proud of) for expressing their views.

People got beat up for expressing their views in the Soviet Union and Nazi Germany. You want that here?

You have the right to express your views, but within certain guidelines. If you block the streets or sidewalk, or have a mass march without a permit, you are subject to arrest. You can yell "freedom of speech" all you want, but a municipality has the right to place time, place and manner restrictions on it, like it or not.

as of this week ,the n.y.c. comptrollers office has one less North Korean communist lover on the taxpayer's payroll .

John Liu ,in order to silence anti-communist writers so he can be mayor, had John Choe disappear from city government.

You're absolutely right, Crapper, no question. People need to act in a civil and legal fashion. What happened on the bridge was definitely crossing the line.

However, No. 10 seems to think that they have no rights.

And, I might add, there are hard hats WITH the demonstrators this time.