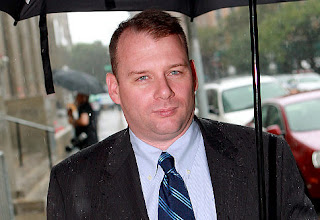 "No money was ever stolen from Michael Bloomberg here," Castello said. "Michael Bloomberg got what he wanted - he won the election. John Haggerty did what was expected of him. He got indicted."

"There was campaign fraud by Mayor Bloomberg and his staff," Castello said.

The lawyer also charged Bloomberg and staffers got immunity when they testified before the grand jury that indicted Haggerty.

"They got a get-out-of-jail-free card," Castello said as Haggerty's fraud trial opened. "They needed a scapegoat."

No one from Team Bloomberg is charged with anything. Haggerty is accused of pocketing the money he got from the mayor for a poll-watching operation to buy his brother out of their dad's home.

"Mr. Haggerty and his legal team are prepared to say anything to avoid prison," said mayoral spokesman Jason Post.

Bloomberg and his aides did get immunity and the possibility of a waiver was never discussed, Post added.
Posted by Queens Crapper at 12:31 AM

A jew will rarely ever get prosecuted to the full of extent of the law in New York City, let alone a billionaire mayor.

Is it just me or is it NOT a coincidence that the mayor had a net worth increase of 1.5 BILLION dollars between October of last year and March of 2011.

Can anyone even postulate him losing money at his tenure as mayor? OF COURSE NOT!

We need a special federal prosecutor to investigate Bloomberg and his underhanded dealings.

Why did Dee Richards break the story that led to the trial? Didn't John pay her enough? How much did she make from the Padavan farewell?

Hey "FlushingRepresenter", you are a typical anti semite. What do you mean, "A jew will rarely ever get prosecuted to the full of extent of the law in New York City, let alone a billionaire mayor."? What does being a Jew have to do with not getting prosecuted? Bloomberg is a powerful billionaire thug, just like Bill Gates, who is working to privatize what was formerly public education in this country. By the way, how do you explain Bush not getting prosecuted for violating the Constitution and lying his way into needless wars in in Iraq and Afghanistan? You also are in need of some writing skills review, by the way. I've known of many Jews who have been prosecuted for various crimes. All rich people get away with criminal behavior, even murder, in this country. Remember "O.J."? I doubt that you represent Flushing in any way. You are just a dumb bigot, lacking any critical thinking skills. Bloomberg is allowed millions of dollars in crooked contracts, most of all at the DOE. He gets money under the table all the time. He happens to be Jewish. He is a heartless cruel human being. That's the issue, not the fact that he is a "jew".

Please don't get your drawers twisted. The machine has an intimate knowledge of the absence of backbone in Queens, and the hallowed tradition that as soon as a reformer sticks their head up (like Crappie - or if you will - a mushroom) everyone else runs and hides or sticks their hand out for a few pennies to keep their mouth shut.

The almost always are ignorant or on the take.

Hey, @FlushingRepresenter you're not just a racist you're also STUPID.

Welcome to NYC, whether its cops in the Bronx or rabbis in brooklyn or chinese guys selling pesticides, everybody gets arrested here.

Man, when will New Yorkers wake up and stop electing these hubris-choked bastards as Mayor? The only mayor in my lifetime who was not a complete POS was Dinkins and he lacked the fighting spirit to be effective.

Anyway, a serpent rots from the head down and the actions of Bloomberg poisons the whole city.

The issue here is Haggerty, who has a comic book deluded notion of his own ability to be a superhero for whom the laws need no apply. Anyone who prevents him for being the superhero he imagines himself to be must therefore be a crook. He and his brother keep gossiping away with malicious old wives tales until the listener breaks down and believes them, even though they fail the most basic examination. Haggerty doesn't believe he stole anything because he believes he is royally entitled to it.

Haggerty stole money,period. I wondering how the Republican party will welcome him back.

But Bloomberg is not immune from be prosecuted for disobeying the Constitution . enabling a sanctuary city for ILLEGAL ALIENS IS CLOSE TO TREASON,especially when our enemies from Al Qaeda have easy entry into our Nation.

it recently was reported that a majority of illegals crossing our southern borders end up in N.Y.C.

the illegal alien local lobby has to be curtailed quickly.

it should start with QUEENSBOROUGH COMMUNITY COLLEGE illegal alien programs.

RE: MS. informed, do you recall that N.Y.C. and U.S. citizens were attacked and killed in 1993 and 2001 at the WTC, by Al Qaeda terrorist muslims ? one dem. president did nothing ,and the second g.o.p. one responded with armed force.he had a majority of DEMOCRAT REPS.vote for this response. that is the nearest that our Nation declares war in this liberal era.

the U.K provided evidence of wmd's in Iraq, and the g.o.p. delayed six months to present it to the U.N.

it is wiser to be safe than sorry.Al Qaeda declared war with the U.S. and it was time to retaliate ,after years of showing weakness because of a liberal government.

you owe my destroyed neighbor's, whose son died in the 9/11 muslim terrorist attack a public apology.

Anyone who would ripoff Bloomturd is a hero in my book.

"Hey "FlushingRepresenter", you are a typical anti semite. "

An antisemite is not someone who hates jews but rather someone that jews hate.


What does being a Jew have to do with not getting prosecuted?

Jews make up the majority in NEW YORK COUNTY otherwise known as Manhattan. They will look past whatever wrong doing and give preferential treatment based on race/religion.

By the way, how do you explain Bush not getting prosecuted for violating the Constitution and lying his way into needless wars in in Iraq and Afghanistan?

That war is Israels war, NOT Americas and big business jews saw to it that he would not be prosecuted for war crimes against humanity.

"Haggerty stole money,period. I wondering how the Republican party will welcome him back."

He was never welcomed in the QGOP, why start now?

Repubs is Qns are coveting and scrambling for Jewish votes but they must not want them as part of their party machine too much or neither faction would have scheduled their annual cat fight on the night Rosh Hashonah begins.

He was never welcomed in the QGOP, why start now?

Who IS WELCOMED in the QGOP? The knuckleheads running it couldn't pick the winner of a one-horse race.

And of course everyone knows that we all wince when we see Vince. Unfortunately Mr. Tabone always has his mouth in gear but his brain in neutral.

"Who IS WELCOMED in the QGOP? The knuckleheads running it couldn't pick the winner of a one-horse race."

Anyone who is ready to roll up their sleeves and do the hard work. The problem is that so many, especially party-switching types, think they know it all and want to come in at the top.