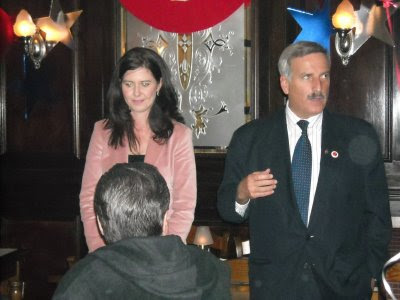 From the Juniper Park Civic Association:

On the day of the Special Election ‒Tuesday, September 13th, Liz Crowley was seen with two of her aides at the Metropolitan Avenue station in Middle Village along with Comptroller John Liu, David Weprin, Assembly Member Markey and an army of aides, blocking the sidewalk and platform so passengers on the trains had to wait their turn passing them. The passengers were given palm cards by Crowley and others and told who to vote for. Some passengers described it as an assault.

We at the Juniper Park Civic Association suggest that Council Member Elizabeth Crowley concentrate more of her time and efforts on trying to solve the many problems in our neighborhood rather than campaigning for her political cronies like Dave Weprin whom her cousin, Congressman Joe Crowley, handpicked.

The JPCA is calling for an investigation as to how city council aides on the taxpayer payroll, are used regularly for political campaigning by both parties during regular business hours. The days before the election many of Elizabeth Crowley's aides were off campaigning and not at their desks in the office on Dry Harbor Road. That may explain why the JPCA received several calls from residents complaining about a lack of response from Council Member Crowley and her staff on a host of issues.

Ms. Crowley, stop the political campaigning and start to do the job you and your staff are getting paid tax dollars to do.

Crowley said any suggestion that she or her staff did anything improper during the campaign was wrong.

“City Council staff, like other government employees, are allowed to do what they want on their own time, including working on political campaigns,” said Crowley. “Neither I nor my staff used any New York City Council resources to campaign and any accusation that we did is false.”

Photo from Lost in the Ozone
Posted by Queens Crapper at 12:28 AM

They all campaign for each other, this sop. However not returning calls by citizens is wrong.

The above is SOP by Marge Markey "Don't email me - I don't have time to respond call my office" No one in her office picks up the phone.

Rep Crowley has no office in Queens neighborhoods only where he lives in Va.

These folks are dead wood - sweep vote them out of office

The Crowleys are useless, so what else is new?

John Lui continues to be above the law. He illegally plasters the city with his campaign signs, then refuses to pay the fines and then routinely walks past subway turnstiles.

CROWLEY AND HER OFFICE STAFF ARE INCOMPETENT BOTH IN THE OFFICE AND CAMPAIGNING. THEIR GUY DIDN'T DO SO WELL.

What else is new about the Crowleys? Agreed but getting the word out and pressure them until we run them out of office entirely - now is the time the momentum is on our side - keep the effort going full blast to rid ourselves of these scourges of society.

The tide is changeing.The democrats should start looking for employment elsewhere. Remember the "silent majority" back in the day..................

Why do all of you continue to vote for these criminals, leave the two political clubs to the realm of history and write in all of your candidates on election night.

“Neither I nor my staff used any New York City Council resources to campaign and any accusation that we did is false.”

That's good enough for me!

Why shouldn't we take our elected Democrats at their word?

I trust my elected Democrats, and I will continue to vote the party line!

Liz Crowley is dumber than a door knob, she's nothing more than a bimbo party hack, what an embarrassment!

RE: "i trusted my elected Democrats".

most of the "TRUSTED DEMOCRATS", in Queens are now in prison or on their way .......

did you not get the message from the voters of NY Dist. #9 ?

A DEMOCRAT/RINO SANCTUARY CITY AND 9.2% UNEMPLOYMENT and 16% UNDEREMPLOYMENT,HOSPITALS BANKRUPT FROM ILLEGALS NOT PAYING & MEDICAID (WELFARE) OUT OF CONTROL.

you only see the corrupt crowleys in the newspapers pretending like they're doing something, people of maspeth should wake up and throw these 2 out of office!!!

The dumb twat was also at the Fresh Pond station.

I wonder if they hopped the turnstiles when they went between stations???

CROWLEY AND HER OFFICE STAFF ARE INCOMPETENT BOTH IN THE OFFICE AND CAMPAIGNING.

You can pretty much say that about the lot of them - the only ones stupider are the ones that reelect them over and over again.

As long as the borough of Queens continues to abound in ignorant voters...political pond scum like the Crowleys will have job security for life!

You get whom you elect!

We have no elected official that has stepped forward to lead. Not one of them is doing the job. Elizabeth Crowley unfortunately is not qualified for the position and has demonstrated a total lack of knowledge of the issues. She is not respected in the City Council and the Mayor's staff thinks she's not worth dealing with.

She MUST be voted out of office.

Dizzy Lizzy Crowley and her gang did not pay, they all went through the handicap gate.