Here are the city's funding priorities 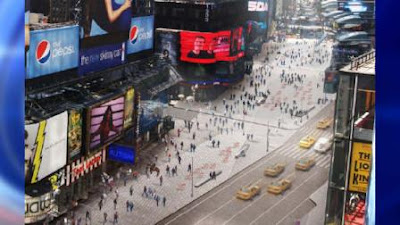 In an effort to revive the stalled construction of a public park at Willoughby Square in downtown Brooklyn, local developers and elected officials are raising millions of dollars to make up for a funding cut by the city's Economic Development Corp., which has overseen and largely bankrolled the project.

The one-acre green space is intended to sit atop a 694-space underground garage, and has long been viewed by the city and the surrounding business community as a centerpiece of downtown Brooklyn's revitalization.

In fact, the city has already shelled out $40 million on acquisition, relocation, demolition and design costs for the $70 million project, whose price tag doesn't include the cost of actually constructing the garage, which is being borne by private companies.

Times Square's pedestrian plazas will be getting a sleek redesign.

The Times Square Alliance says it's intended to simplify and de-clutter - and create a unified identity for the heart of Times Square.

The $27 million plan is heading for final approval and is expected to be completed in 2014.
Posted by Queens Crapper at 12:17 AM

Revitalization is one thing,overcrowding is another.......

if you live in a boro other then manhatten your shit outta luck..your tax dollars all go into the city not your hood...sorry..

What's holding up the money for St. Saviour's Park?

Manhattan is a prime tourist destination.

The other boroughs aren't.

Shouldn't the money be going where people actually live? Are more tourists really going to come because the city spends $27M "de-cluttering" Times Square? How do more tourists dollars benefit taxpayers if the city doesn't spend major capital money where they live? Wouldn't every community like a new park or watermains that don't break?

An underground garage for that area of Brooklyn seems an extravagance.

The Times Square mutilation should be repaired by the next mayor.

Times Sq is the biggest tourist draw in this city. Investing money on improving it for tourists is simply smart business that pays dividends. And if you think that is no benefit to Queens, I should point out that there are quite a few hotels in Western Queens that accommodate tourists who can't or wont pay $300 and up for a hotel room.

As for the parking garage, yesterday someone was just whining that bikes lanes are a waste of money that should be spent on more roads and parking. The irony is I'm sure many people in that neighborhood would like LESS parking which translates to less cars.

So you don't want the city to spend money on bike lanes, car parking, or tourist attractions. At least not until every pothole is filled.

No it's more like the city has millions to blow on projects that do not help its residents but doesn't have $75K to start the St. Saviour's project or the money to fix the ballfields at Highland Park or Maurice park that has been promised for the past 10 years, or to fix the streets at Willets Point. No matter how much money tourists bring in the money is not spent outside of Manhattan. GET IT?

The streets at Willets Point were not fixed for decades because of a lack of desire, not a lack of money.

The only money the city drops outside Manhattan is on those that involve development. (That's what the garage in Brooklyn is for and is only being done because developers want it, if you read the article.) Repairing existing infrastructure is not sexy. Selling land for a dollar to developers who will sell the units tax free for 25 years? Now there's a plan.

"The streets at Willets Point were not fixed for decades because of a lack of desire, not a lack of money."

Everything I listed was not done because of a lack of desire, not a lack of money. The city always finds money for projects it really wants to do and the rest sit for years.

a Mayor Doomsberg GREEN DREAM, WITH SEWER DRAIN HAZARDS ON THE PAINTED TRACK, AND UNDER THE BASKETBALL COURT ?????
Chancellor Walcott was informed ,but NO RESPONSE ??????

while the rest of us pay taxes subsidizing this and we see hospitals closed, schools crowded, librarians cut, and streets a mess.

Where are the politicans? Where is Queens Civic Congress? Where is ... anybody.

Why do we take this over and over?

if you live in a boro other then manhatten your shit outta luck..your tax dollars all go into the city not your hood...sorry..

So why did not Queens Civic Congress say something about this or term limits instead of limited questions serving their specific interests?

I support the revamping of Time's Square and doing the right thing at St. Saviour's -- a green and peaceful park for residents to enjoy. Bike, pedestrian and park advocates tend to overlap and many are natives or first-generation residents who fully embrace their new home.